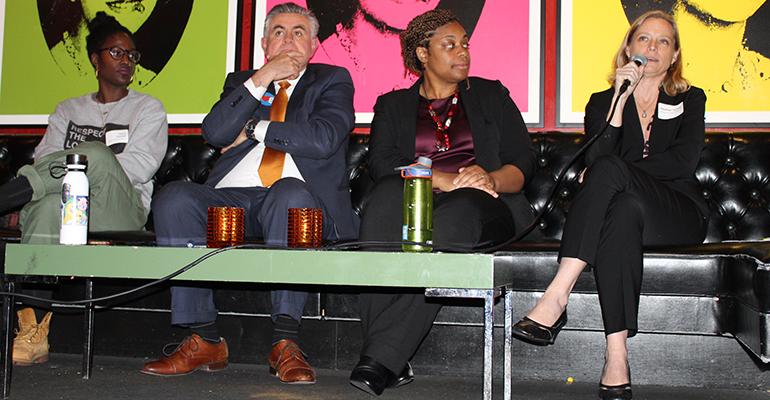 Leaders convened to discuss the progress LA has made toward electrifying its transportation sector and what lies ahead to reach zero emissions.

Leaders in Los Angeles County’s transportation and energy industries gathered for a panel discussion in downtown Los Angeles on January 22 to discuss their commitments to heavy-duty, zero emissions vehicles.

The panel event, hosted by the Los Angeles County Electric Truck & Bus Coalition, convened leaders from the city of Los Angeles’ LA Sanitation and Environment (LA Sanitation), Southern California Edison, the Port of Long Beach and East Yard Communities for Environmental Justice to discuss the progress the Los Angeles region has made toward electrifying its transportation sector—and what lies ahead to reach zero emissions.

During the panel discussion, LA Sanitation General Manager Enrique Zaldivar publicly committed to transitioning the agency’s entire refuse truck fleet to zero emission trucks by 2035—acting as a first-mover to spur further and faster adoption of medium- and heavy-duty electric vehicles in the solid waste industry.

“We came to the realization that we are such a significant player in this industry across the nation; we have a marketplace pull and leverage. We know that we can be an enabler and an accelerator,” said Zaldivar during the event. “We are now looking at 2035 to fully electrify our fleet.”

“We [LA Sanitation] know we can be part of the solution to get us to zero emissions, and we believe that we can be instrumental in accelerating the pace at which the solid waste industry adopts electrification. We are moving all-in on electrification. It is the only way we are thinking now,” added Zaldivar.

“Committing to a 100 percent zero emission refuse truck fleet is precisely the type of leadership our region needs,” said Carlo De La Cruz, senior campaign rep with the Sierra Club, in a statement. “The California Air Resources Board found that refuse trucks fit the optimal duty cycle for electric vehicles, and the Engine Manufacturer’s Association believes that all refuse truck purchases in California could be electric by 2026. The technology is clearly ready, so this groundbreaking commitment from the city of Los Angeles will help spur adoption of zero emission refuse from smaller cities and private hauling companies who will see that it can—and must—be done to meet our health and climate goals. These refuse trucks will eliminate dangerous emissions in a region that is already suffering from the worst air quality in the nation. In addition, as LADWP [Los Angeles Department of Water and Power] meets its commitments for carbon-free energy, this 100 percent zero emission refuse fleet will be 100 percent renewable and 100 percent clean.”

The commitment to electrify Los Angeles’ refuse truck fleet comes after significant organizing by the Los Angeles County Electric Truck & Bus Coalition, which sent a letter to LA Sanitation in August 2019 pushing for a commitment to transition away from diesel refuse trucks.

“LA Sanitation’s commitment to a zero-emission municipal refuse truck fleet by 2035 is just another example of how our region has always been an environmental leader, pushing innovation and early adoption of vital clean vehicle technologies,” said Adrian Martinez, staff attorney at Earthjustice and panel moderator. “By removing polluting fossil-fueled refuse trucks off our streets, city leaders have not only reaffirmed their climate leadership but are making our neighborhoods healthier and quieter places to live.”

“The Los Angeles region can make a huge impact in accelerating U.S. adoption and supporting a sustainable electric refuse truck marketplace. This technology transition gives us an immense opportunity to ensure that the emerging jobs support community prosperity as well as community health. When cities commit to electric procurements with good jobs standards for those making trucks and installing charging infrastructure, we can create not only a cleaner and quieter community but a community that works for everyone,” said Hector Huezo, senior workforce equity coordinator at Jobs to Move America, in a statement.