Consider the lumbering garbage truck. Sure, there are many within our industry who are able to discern her nobility and inner beauty, but for the vast majority of the population, garbage trucks symbolize the pinnacle of ungainliness. Still, where so many see inelegance, choreographer Allison Orr saw … possibilities.

So it was that in 2009 Orr devised a dance recital starring garbage trucks, simply titled “The Trash Project.” She chose to work with Austin Resource Recovery (ARR), the municipal sanitation department in Austin, Texas. The resulting performances are the subject of “Trash Dance,” a documentary by director Andrew Garrison, which had its world premiere at this year’s SXSW festival in Austin in March.

At first, says ARR Director Bob Gedert, the department didn’t quite know what to make of the request: “The largest concern at the city level was liability,” he says. “This was going to be performed with city trucks by city employees on city time.” Most of those concerns were alleviated by negotiating clearances with the city attorney’s office and by getting Orr and Garrison to foot the bill for everything but the workers’ time and the fuel in the trucks.

More than anything, says Gedert, his department was intrigued by the opportunity to humanize an oft-overlooked workforce: “You have the street sweepers, trash truck drivers, litter pickup crews and so forth, and they do their daily grind and earn their paychecks. The citizens see the end result of clean streets and garbage picked up, but they don’t see the faces. These are human beings with families.”

The drivers themselves, as depicted in the film, were a harder sell. “There was some hesitancy on the part of some employees because it was billed as a dance,” says Gedert. “They said, ‘We’re not dancers!’” 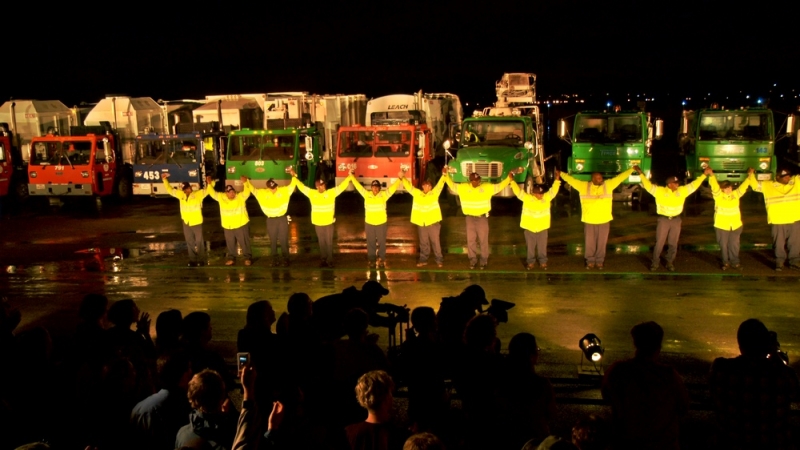 But Orr, anticipating that reticence, worked hard to ingratiate herself to the drivers and understand the nature of their work. “She did ride-alongs with the employees for six months,” says Gedert. “And after the six months, the employees lined up and volunteered to be a part of it.”

The popularity of the first Trash Project recital in August 2009 exceeded all expectations. “We had seating for 1,000 and 2,000 residents showed up,” says Gedert. Due to its popularity, Trash Project 2 was performed in August 2011 (two shows this time, with 2,000 attendees each). “Trash Dance” draws footage from both editions of the project.

Gedert, who attended the SXSW premiere, says a favorite segment involves a particularly graceful crane. “The piece of music is absolutely beautiful, and the crane operator was timing his moves on the crane to the music. It really was like a dance.”

But for his money the best moment comes at the end of the film. The performers, having completed their performance, are out of their trucks and surrounded by a congratulatory audience and their families. “They’re picking up their kids and showing their kids the trucks that they drive every day; Dad and Mom are showing off their work and what they’re doing.

It shows that there is this human element behind our workers.”