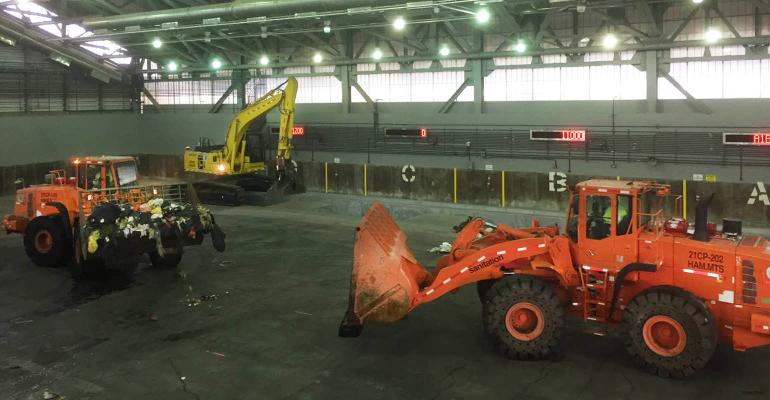 The DSNY says the Hamilton Avenue Marine Transfer Station in Brooklyn, N.Y., is operating as expected and within all parameters.

About a month into operation, the New York City Department of Sanitation (DSNY) says the Hamilton Avenue Marine Transfer Station (MTS) in Brooklyn, N.Y., is operating as expected and within all parameters.

“We are pleased to be expanding on the solid, long-term relationship we've had with the City of New York,” Jim Fish, president and CEO of Waste Management, said in a statement. “Our decades-long operating experience in the area will ensure we continue to provide the excellent service the city has become accustomed to from Waste Management.”

Waste Management is transporting the municipal solid waste-filled (MSW) containers via barge and rail to upstate New York and southern Virginia landfills. When announced earlier this year, the new transfer station was expected to process approximately 1,600 tons of trash per day.

“Hamilton Avenue MTS is operating on a 45-day ramp-up schedule and is receiving approximately 450 tons of MSW per day,” says Atkinson.

Located near the Gowanus Expressway, the transfer station aids in elimination of long-haul trucks, stabilizes the long term economics of waste export and ensures equitable distribution of waste handling facilities across New York City, according to Atkinson.

“DSNY strives to usher in the new era of NYC Solid Waste Management by reducing the current levels of air and noise pollutions within NYC, while at the same time providing environmental equality to all NYC residents,” says Atkinson. “With the opening of the Hamilton Avenue transfer Station, DSNY has three of five barge-to-rail or rail transfer stations opened and plans to open the final two transfer stations with the next 24 months.”

NYC Mayor Bill de Blasio said in a statement, “For far too long, a few communities in the five boroughs have been saturated by waste transfer stations and resulting truck traffic. We are taking a huge step in shifting the burden away from those communities. When these stations are fully up and running, overburdened communities will breathe easier knowing 200 fewer trucks per day will be carrying trash through Brooklyn.”

Atkinson says the new transfer station will not release any odors.

“The Hamilton Avenue MTS exhaust system scrubs the air inside the facility, neutralizing odor causing compounds in the facility before it is introduced into the atmosphere, giving off no odor whatsoever,” he says.

The SWMP is a 20-year, five-borough plan that will handle New York City’s waste and offer flexibility in the case of a natural disaster or other emergency. The plan, spanning from 2006 to 2026, provides NYC with a new infrastructure and mandates a switch from reliance on long-haul trucking to a system of marine and rail transfer stations spread throughout the five boroughs.

According to a statement, full implementation of the plan will reduce annual truck travel by more than 60 million miles, including more than 5 million miles in and around New York City, and will cut greenhouse gas emissions associated with waste transport by more 34,000 tons annually.

As part of this plan, the opening of the Hamilton Avenue MTS redirects approximately 200 DSNY trucks per day from private land-based transfer stations in Brooklyn, including 780 tons per day and 100 trucks per day from North Brooklyn. The proposed Southwest Brooklyn Marine Transfer Station will further redistribute the burden of waste when it opens in 2018.

“The (SWMP) offers a framework for dramatically reducing the number of truck trips and miles associated with disposal of New York City’s waste,” says Atkinson. “Is also establishes a cost-effective, reliable and environmentally sound system for managing NYC’s solid waste, over a 20 year period.”