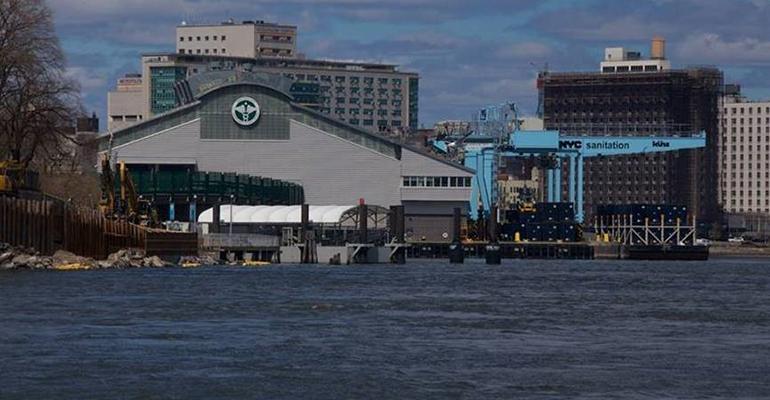 Start Slideshow ›
The transfer station, which opened in March, is permitted to receive up to 1,860 tons of municipal solid waste each working day.

After years of planning, the long-awaited East 91st Street Marine Transfer Station in Manhattan, N.Y., opened in March. The transfer station, which is operated by the City of New York Department of Sanitation (DSNY), is the fourth to open in the New York City area and is permitted to receive up to 1,860 tons of municipal solid waste (MSW) each working day, except in emergency situations.

The transfer station was originally opposed by activists, community groups and local residents, but according to DSNY, the opening of the facility has been a success and there haven’t been any concerns or complaints raised to date.

“The transfer station opening was a great success. We heard the concerns raised over the past couple of years, and we made adjustments to our plans as needed,” says DSNY Deputy Chief Anthony Bianco. “Since opening, we have given tours to Community Board 8, CARE and others. We have provided them with information, and we have answered any questions they may have—we have nothing to hide.”

The transfer station, which operates 24 hours a day, six days a week, is outfitted with a 1,900-square-foot entrance and exit ramp that can support up to 17 trucks; radiation detectors that can be triggered by both waste and people; LED lighting and lots of natural lighting; a semiautomatic scale system; negative pressure roll-up doors equipped with punchout windows; a heating, ventilation and air conditioning system that filters, cleans and reintroduces air back into the facility; an odor detection system to manage odors; misters to help control dust; a leak detection system; a “smartboard” that includes equipment information and employee information such as qualifications, who is out sick or on vacation, daily duties and schedules; and more.

“We have air monitoring done twice a year, and we have detection systems that alert us when something is off,” says Bianco. “We also have exterminators come once a month. In terms of traffic and safety, we invested a lot of money into the intersection [at York Avenue and East 91st Street]. The intersection includes a speedbump, curbs that allow for better visibility and APS [accessible pedestrian signals) poles. The intersection is also patrolled by a member of our staff.”

Staff works with the facility's six bays, but due to the volume of material received, only five are typically in use. The average truck unloading at a bay will dispose of 8 to 10 tons of MSW, which is then moved to a spill- and leak-proof container that can hold up to 20 tons. On a typical day, between 40 and 60 trucks make their way through the facility to drop off materials.

“Covanta is our partner for two of our transfer stations, and Waste Management is our partner for the other two,” says Bianco. “Once the containers leave our facility, they typically take about eight to 10 days to come back to us. We don’t really have to worry about delays, but weather, wind and tides can cause some challenges. After all, they don’t call [the narrow tidal strait in the East River] Hell’s Gate for nothing.”

While the facility has only been open a couple of months, operations are going smoothly and there have been few challenges, according to DSNY.

“Besides weather, wind and tides, the only other challenge we face is when our neighbor Asphalt Green has large events,” explains Bianco. “The events draw a lot of people, so when the events are going on, we make adjustments as needed to keep everyone safe.”

Earlier this week, Waste360 Editorial Director Mallory Szczepanski got a chance to tour the transfer station. Take a look at this gallery to view some snapshots of the interior and exterior of the East 91st Street Marine Transfer Station.