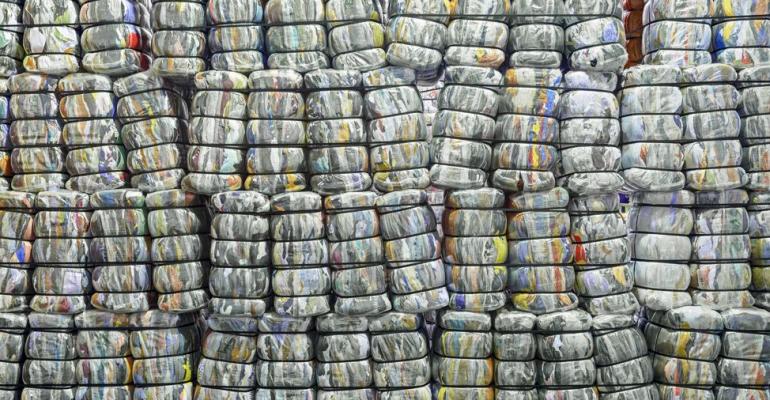 Clothing manufacturers are cranking out new merchandise fast, with consumers buying, then discarding it fast too—then purchasing whatever fashions are next in line, leaving landfills and thrift shops who receive the discards to figure out how to manage them. As this take, make, dispose trajectory continues, new business models evolve to try and take on the onslaught of unwanted garments. These models range from rentals to brokerage companies that buy secondhand clothes and sell them where they can find hot markets.

Paragon Textiles is among those in the used clothing brokerage business, buying, sometimes repairing, then selling what thrift shops don’t want, and shipping them mainly to Africa and South America. At least that’s how Paragon Textiles CEO and owner Murtaza Haji got started in the 1990s, selling a few containers at a time.

Today the company works from a 42,000-square foot warehouse in Los Angeles, Calif. and procures, not just from secondhand shops, but also buys overstock and returns of a few retailers. Sometimes Paragon deals directly with the stores, and sometimes through brokers.

“We process and ship overseas to microentrepreneurs that start small clothing shops. Some leave their day jobs where they made the equivalent of a few hundred U.S. dollars a month. They realize they can buy product and make more money, selling one bale at a time,” Haji says.

The most ambitious small buyers and sellers earn up to thousands a month, according to Haji.

Paragon recycles, or else sells as wearable clothing, 97% of what it receives, most coming from thrift shops in roughly 40,000-pound bales; the Paragon team has no idea of what’s in them until they open them.

Paragon sorts it all, and it’s a complex process. First, workers separate in men’s’ ladies’, and children’s clothes, and by size, pulling out what’s not ripped or stained.

This usable clothing is the largest part of the mix and is what goes to the two main overseas markets. Some of the rest is cut into cleaning rags sold to U.S.-based companies that make wipers in bulk and supply them to end users.  A small remainder is converted into other items, for instance unrepairable sweaters are shred and the fibers are used in India to make recycled yarn, clothes, or carpets.

He got his start when a cousin visiting him in LA from Congo in Africa propositioned him to find used clothing, sell, and ship to him overseas. Haji dabbled in unchartered territory, learning more from a friend with a clothing business in Canada who asked him for help finding LA suppliers of used clothes, and at the same time teaching Haji about the secondhand textiles market.

This was the start of a decades-long journey focused mainly on establishing and nurturing relationships to build a solid network.

“The first steps are to find a strong buyer in your overseas market and a good supplier with quality merchandise. You also need an established relationship with a freight forwarder who does transcontinental shipping,” he says.

Another key lesson in exports is you have to be diversified.

“There are a lot of ups and downs and political and economic instability in some of the regions where we work. But if business in one country is slow, we move product elsewhere.

And you have to find what’s in demand. Buyers pay ocean freight costs and duties, so you have to send what they want,” Haji says.

In his strongest market, that demand is for quality clothes—not raw materials or garments needing repair.

Paragon’s sister company, Casa de Ropa in Chile, warehouses what Paragon sends and distributes it to local microentrepreneurs, mainly women.  Casa de Ropa helps them determine their target customers and recommends what they should buy.

“She takes bales home and might clean the clothes. She takes them to the flea market, displays and sells them,” Haji says.

Haji gambles sometimes in that if she seems serious, he sends her the product for a down payment, and almost always is paid back the balance.

“They are responsible and determined. So, we support her; slowly she grows. We no longer have to finance her because now she has a strong business. They come back and stay loyal because you put your neck out and trusted her, and now she is grateful to you,” Haji says.

Paragon’s model and merchandise work, he figures, because his brand represents America in the eyes of consumers. They see what intrigues them on social media and in Hollywood movies they watch on Netflix.

“What attracts them could be a t-shirt or other garment displaying a photo of Madonna or Michael Jordan, or the words “Nike” or “Florida … They love American fashion,” Haji says.

“With Paragon’s help, we now have the ability to liquidate our inventory in a way that makes a positive social impact in less-privileged parts of the world, while also contributing to our company’s sustainability goals,” says Bear Handlon, owner and CEO of Born Primitive.

Paragon’s proposition struck a chord with Handlon, taking him back to an earlier day.

“We started our company out of our garage, and we went to countless events trying to sell t-shirts from a card table for the first few years. When I think about the people who will be purchasing our goods to make a profit for their own small businesses, it really comes full circle for me. They will essentially be doing what we did but in a totally different part of the world.”

Only recently has Handlon’s apparel business grown to the point where he is challenged to forecast precisely, and as a result ended up with overstock.

But overstock and return textiles inventory is common, especially for mid-sized and large retailers, where merchandise builds in their warehouses, often eventually making its way to landfills or getting burned.

“That's where we come in, giving another option, says Kay Litwin, Paragon Textiles manager of Partner Relations and Social Responsibility.

Paragon now retrieves about 10,000 to 20,000 pounds a month from a total of three retailers, which, like thrift shop finds, are shipped overseas. Litwin is trying to expand the retail end of the business – now only 5% of the mix – to build out Paragon’s model.

“Some people say, you are selling to these poor women? But for our overseas entrepreneurs, relying on donations would not be a long-term solution,” Litwin says.

“You need to assist countries in creating a sustainable economy rather than flood them with donations. Now these women can build a company and participate in a global market.”

“It’s like a two in one. As a private company if we do not make money, we can’t do what we are doing. But the beautiful thing is we are also doing a lot of good for the environment and helping entrepreneurs overseas.”