Can the U.S. benefit from at-home biogas systems? One international startup company thinks so as it launches a system aimed for use at eco-friendly middle and upper middle class homes.

HomeBiogas, based in Beit Yanai, Israel, has created a self-assembled biogas system that turns kitchen waste and livestock manure into usable cooking gas and liquid fertilizer. The system can produce clean cooking gas for three meals and 10 liters of clean natural liquid fertilizer a day.

“It is an on-site waste treatment system that can digest all of the organic wet waste generated by a household; and hence dispenses with the need to transport and centrally process the waste in a landfill,” says Ami Amir, marketing and business development for HomeBiogas. “On top of that, it provides immediate gains through the cooking gas and natural fertilizer that it provides the household.”

Biogas is generated by the system through anaerobic fermentation of organic matter such as food leftovers or animal manure. The lighter-than-air biogas that is produced contains mainly methane gas and carbon dioxide and is flammable. 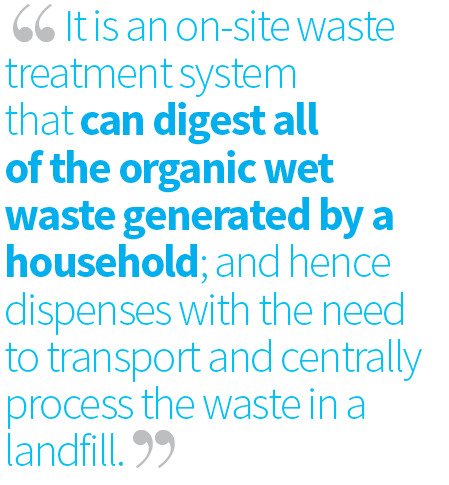 “The gas may be used for cooking, lighting or heating water by using devices which are compatible with low pressure biogas,” says Amir.

The fertilizer produced by the system may be used in gardens or for other vegetation, including hydroponic systems with detached beds.

The system's principle of operation begins when organic matter is fed into the digester tank, which has been filled with water. The anaerobic bacteria in the water biodegrade the matter and digest it. Biogas is created during the fermentation process.

“The system operates as a continuous-flow system. The materials to be processed are fed in one end, and the gas and fertilizer are emitted from the other end.  A mechanical mechanism unique to this unit regulates the gas pressure, enabling the gas to be delivered at a stable and predictable pressure, as required for reliable cooking or heating,” says Amir.

The generated biogas is filtered to remove any unpleasant odors and toxic gases such as hydrogen sulfide. The liquid fertilizer is filtered by flowing via a chlorine tablet that reduces the amount of active bacteria. The biogas can then be connected via a gas pipe to a stove, and the fertilizer can be collected in order to use it to feed the plants.

The system can process up to 5 kilograms of food leftovers, 15 quarts of animal manure or a combination of some food waste and some animal manure. The daily gas output is equivalent to about 6 kilowatt-hours of energy.

“In layman terms, enough gas for three hours of cooking,” says Amir. “It accepts meat, fish, fats, oils and dairy stuff—all of which are not treatable by composters.”

As of now, HomeBiogas faces some challenges in reaching North America.

“Lack of international standards creates a barrier to entry,” says Amir. “Educating the market and creating market awareness to the existence of this unique solution” also is an obstacle.

But Amir insists that there are several benefits of the at-home system.

“It provides clean energy, clean fertilizer, promotes health and well-being while at the same time disposes of all of the wet, organic waste generated by the household,” he says.

The company has sold 150 units so far, and launched a 30-day crowdfunding campaign through Indiegogo last month to continue production of the units, which surpassed its goal in only six days.