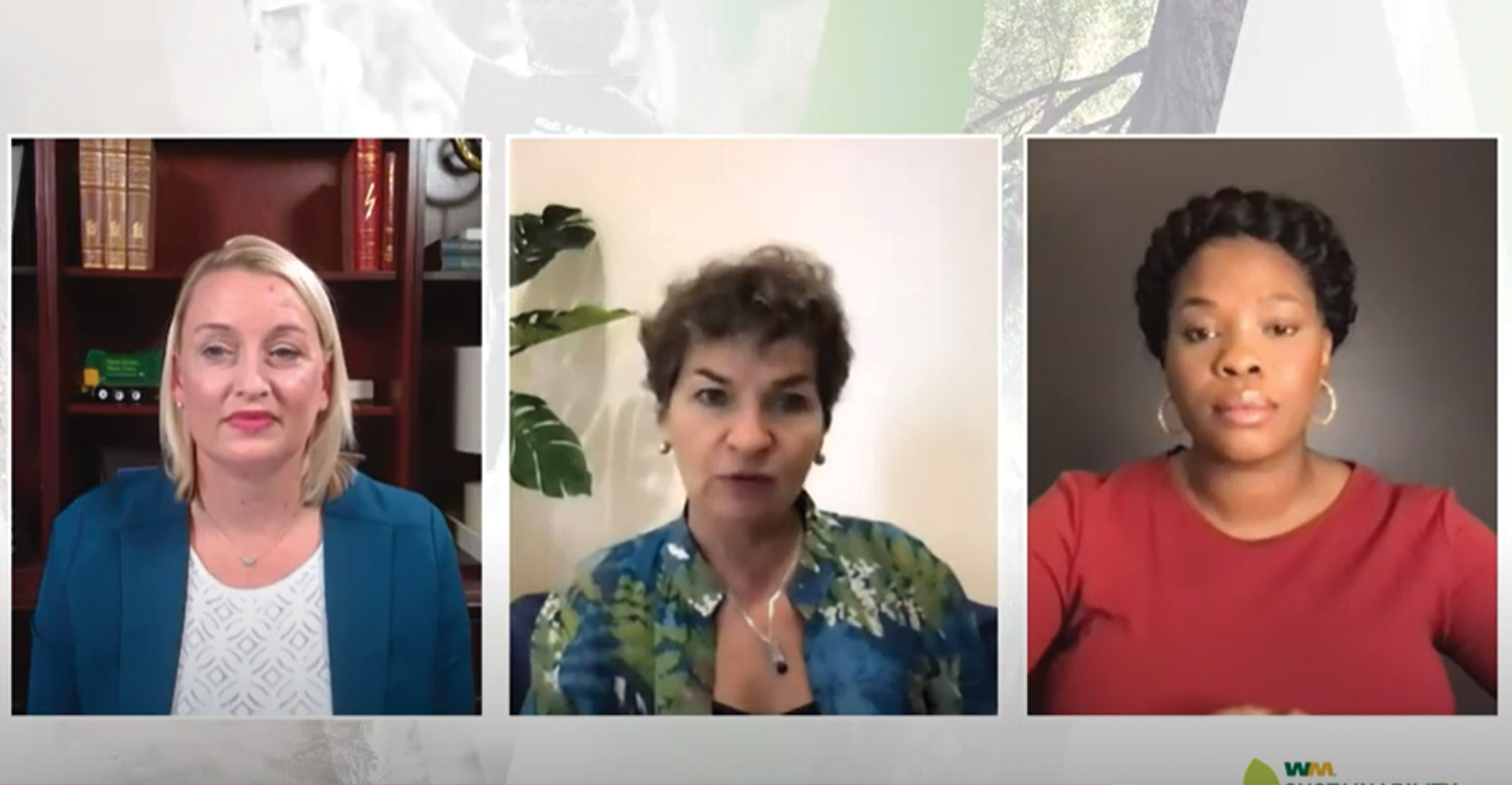 Individuals need to participate in change because “it is the signal of demand that all corporations are listening to," said Christina Figueres.

Along with Figueres, Jasmine Crowe, Goodr founder and CEO, spoke about the social impact of food insecurity and what can be done to bring food that would otherwise end up in landfills to those who need it most.

The event was the first in a two-part series leading up to Waste Management's Sustainability Forum which will be held February 3-4, 2021.

“We thought it was important to look back and conquer the intersection between environmental issues and social issues that have been amplified this year,” explained Tara Hemmer, senior vice president, field operations for Waste Management.

Whether its an environmental issue or social change that needs to be made, the needle of progress won’t move unless society participates in a collective and calculated manner, Figueres stressed throughout the presentation.

Climate change is a “team effort,” much like the prevention methods propagated to slow the transmission of novel coronavirus, she said.

Figueres touched on five lessons learned from the pandemic, saying that her thinking has evolved as the public health crisis conditions. However, there are fundamentals in both circumstances that have not changed, and one is the reliance on science.

“It is very clear that those countries that are following the suggestions and the guidance of health professionals who know the science behind the pandemic are doing much better than those that are not,” Figueres said.

And the same parallel can be applied to climate change because “relying on science for guidance is the only way to address climate change,” she said.

When lockdowns first began to take place at the beginning of 2020, people developed an “individualistic frame of mind.” As restrictions loosened, it became clear that the pandemic was not an individual issue, but rather a collective issue. The same can be said about climate change, Figueres said.

“Climate is not an individual sport. We cannot address climate individually,” she said. “Each of us has to contribute in some fashion just like a team sport, and every member of a sports team contributes to the overall effort.”

Large corporations such as Amazon, Apple and Ikea are making sustainability goals not for charity or to save the plant but because “it makes business sense” to be responsible with both environmental and social issues, Figueres said.

Corporations are realizing that it’s not just their carbon footprint, but their entire supply chain that needs to evolve and become circular. And circular thinking is not just essential, it’s required to reduce waste.

A trend among these recognizable names is to set increasingly ambitious sustainability goals. Figueres referenced Amazon’s goal to become carbon neutral by 2040. Apple, Nike and Starbucks have set their sights on 2030. Other companies such as Ikea and Microsoft have set more aggressive goals, pledging to become climate positive by 2030.

Above all, creating an ecosystem of responsibility among corporations moving toward the same goal will “increase the resilience of all of them,” she said.

Figueres also alluded to individual actions that can be made to influence climate change and sustainability.

“We can’t expect governments and corporations to do something that we are not part of,” she stated.

By 2030, individuals, cities and corporations have to be at one-half of the emissions they currently are producing. If there is a collective effort, it will open the door to “a world that is so much better than the world we have now,” but it does require every person to participate.

The Face of Hunger

Crowe continued the conversation with educating the audience about food waste and insecurity.

What does hunger look like in America? “It’s a very sad picture,” she told viewers.

Food insecurity has drastically escalated during the pandemic, and those who have never experienced hunger are facing empty plates for the first time. And what someone visualizes as an individual who is facing food insecurity might not look like what they think.

So how can the 72 billion pounds of edible food that goes to waste each year in America make it into the hands of those who need it most?

Crowe is tacking the issue with Goodr that currently is networking with 30,000 nonprofits across the nation to fight food insecurity, but it wasn’t always this way.

Working out of her home kitchen and food pantries in Atlanta, Crowe regularly cooked meals and hosted Sunday Soul Food pop ups for those in need. One day, a video she posted about the effort went viral and someone asked her which restaurants donated the food.

“The reality was nobody. I was couponing. I was price matching. I was taking $5 and $10 donations and turning it into these marvelous dinners for up to 500 people,” she explained.

A subsequent Google search led her to the issue of food waste. During her volunteer work at pantries, she noticed that the food provided was not substantive or nutritional. Sugary snacks, a gallon of barbeque sauce and potato chips were not sufficient for a healthy meal.

“The idea that we should produce more food when so much goes to waste is just not right,” she stated.

“I thought ‘why were we not using technology for social good to get food to people that were hungry?’ And that’s how the journey got started,” she said.

Crowe quickly realized that innovation is key to solving logistics issues that exist to get individuals the food they need. Through Goodr, she developed an app that allows businesses to click on the items they have to donate and schedule a pick-up through various partners such as Uber.

“No matter if this is a small amount of food that can fit into someone’s trunk or this is a distribution center than needs an 18-wheeler, we’re able to move that food,” Crowe explained.

And the journey is not over. Crowe and Goodr are continuing to have conversations with other stakeholders such as Waste Management to expand the network needed to battle food insecurity.

Just like Figueres, Crowe stresses that at the end of the day, it’s about the collaborative effort needed to find solutions to societal issues.

“It’s not just on one of us. It’s about everybody working collaboratively,” Crowe said. “ I believe as an individual that I can make a change and that’s why I started this company in 2017. While we’ve enjoyed so much success – whether that’s press or now we’re at 5 million meals we’ve provided to people in need – nothing will happen without these other partnerships and without these other networks. That is critical.”

She continued, “With everything we’ve experienced in 2020, partnerships and collaboration is going to be even more paramount to our success.”