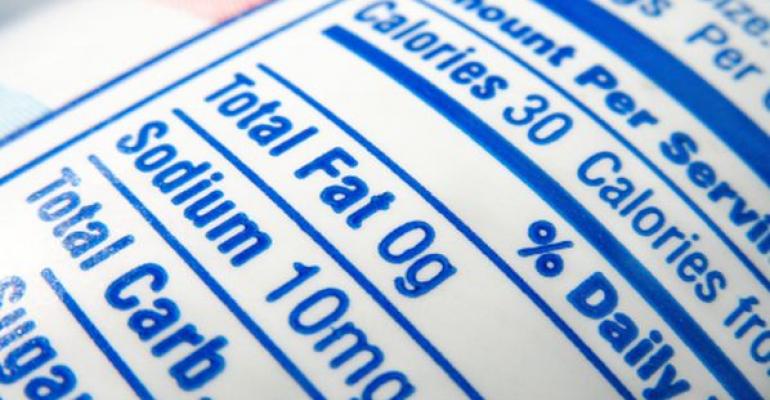 Carbon labels, revealing carbon emissions associated with products as well as with businesses’ and consumers’ actions, are a new thing. Today, only a handful of retailers and brands put these labels on their menus, clothing, and other products. Meanwhile advocacy for carbon literacy is gaining momentum. With that movement, enterprises pushed to be more transparent about their sustainability practices should prepare to understand, and to tell more of, their carbon story.

Carbon labels, revealing carbon emissions associated with products as well as with businesses’ and consumers’ actions, are a new thing. Today, only a handful of retailers and brands put these labels on their menus, clothing, and other products. Meanwhile advocacy for carbon literacy is gaining momentum. With that movement, enterprises pushed to be more transparent about their sustainability practices should prepare to understand, and to tell more of, their carbon story.

This was at least part of the underlying message of retailers and other companies who presented on carbon labeling and carbon literacy in general at an SXCW conference as part of the film and music event’s Climate Change track.

They spoke of how they went about adopting carbon labeling and other ways they draw attention to carbon footprint. They shared advice, born from their experiences, on how other companies can get started. And told of other work underway to stir consumers’ “carbon curiosity” and intended outcome of this work.

People who go to Clever Carbon’s website find a couple of questions on the landing page: “What’s your carbon footprint?” And “Where do you live?” From there they are asked more to get at details such as what they eat, how they commute, whether they fly much, among lifestyle choices.

Getting people to think about their actions that impact carbon footprint is important because what we can quantify and measure, we can change, said Clever Carbon’s Li.

The company leverages multiple tools intended to engage them and make learning fun without judgment. A couple of examples: a play list of popular songs reframed with a carbon dioxide-themed twist. An app consumers can put on their phones with common items’ carbon footprints.

“What underpins everything we do is our branding. It’s inviting and modern and people can relate to it,” Li said.

She explained the quiz question about where people live.

The annual average carbon footprint of a person depends on their country. For example, in the UK the average is 8.3 tons annually. In Vietnam it’s 2.1 tons, and in the U.S it’s 17.5 tons.

“The numbers depend on energy mix; how much of that energy is renewable; whether there are alternative transportation modes to emission-emitting vehicles ….”

Decisions chosen considering these and other factors have tremendous impact Li said, making this point tangible by telling event attendees, “If you take a flight from New York to Tokyo it’s 1.8 tons of carbon. So, by taking one flight you have almost as high a carbon footprint as the average Vietnamese person in a year.”

On the corporate side is a free program called Clever Actions, with over 80 actions companies can take to embed sustainability into their cultures.

Restaurant chain Just Salad is among businesses working to find its way to carbon literacy within its own operations.

The company has a reusable salad bowl program and began by quantifying carbon emissions in water savings from this reuse model, versus choosing to compost or dispose.

The difference was dramatic, Just Salad’s Noonan said. The next step was to carbon label its menu.

“We wanted to be as radical with food as we are with our packaging and embarked on the same type of journey looking at every item on our menu. We looked at life cycle analysis research on every ingredient and calculated it into our carbon label,” she said.

Consumers learn about potential choices not only from the in-store menu, but also with an app. Using the app, they can for instance compare carbon emissions from a beef patty to a salad to put that figure in context.

Most recently Just Salad partnered with a company, Planet FWD, that provides third-party certification of its carbon labels.

“We looked at regulation and there’s little around carbon labeling in the U.S., but the Federal Trade Commission is counseling [businesses] to be transparent about what’s in their carbon footprint label… In the future there’s room for a lot more standardization so consumers have trust. And I think [gaining that trust is] where third-party partners come in,” Noonan said.

Ewell echoed the importance of bringing in an outsider, especially considering the mistrust generated by greenwashing.

“We have to educate customers to help them understand what we are trying to do, why, and it’s really about transparency. Using a third party made it easy for us to say to customers we are not experts, but they are.”

Sustainable fashion brand Pantys also launched carbon labels for its products and has done a lot of research to help understand how it’s progressing in further reducing its footprint.

“We look at materials, production, transport, packaging, disposal, and use. Taking this approach to measure, reduce, and offset empowered us to offset [carbon footprint of all our products] and we became one of the first companies to have a portfolio of carbon-neutral products,” said Pantys’ Ewell.

She advised that companies interested in launching carbon labels and/or becoming more carbon literate in general assign a project lead who understands impact at every aspect of the business, from sourcing to production.

Ewell paused on one challenge in trying to get a full carbon picture.

“We needed a lot of private information from all our partners. Our suppliers of fabrics, our factories where we cut and sew … we had to understand their electricity bill, what trucks they use to transport fibers to dying facilities. It takes effort and partners committed to make it happen.

Inspiring them and taking them along the journey of why we are doing it was an important step to making this happen,” she said.
Something interesting that Just Salad learned was that only 10% of its carbon footprint comes from transporting food. It’s more tied to what’s in the food, which was important to know to inform how the company engages with customers about ways they can reduce impact.

“If you want to be a climate-smart eater and go as low as you can on carbon, there’s a lot more nuance to the conversation about eating sustainably than we even ourselves realized,” Noonan said.

A general consensus was that innovation will be key for the future.

Just Salad is focusing on gamifying, possibly with a platform to recognize when customers purchase low-carbon menu selections and sending promotions to ‘low-carbon eaters.’

“Gamifying that incorporates marketing is where it starts to get really interesting because it focuses on double bottom lines of loyalty and real impact,” Noonan said.

Standardization will be critical for the future in order to compare carbon labels from one company or product to another, Ewell said.

“It has to do with methodologies used. But the question is, will that standardization come from the public, like with nutrition labels, or from the private sector like we are seeing with the B Corp movement to create standardization in terms of accountability and sustainability.”

Li projects that the private sector will play a heavy hand in teaching about carbon literacy and should get ready to take advantage of opportunities. “If you are working for a private company, ask how can we weave more sustainability into the workplace?”

Ewell’s take is that carbon labeling is the beginning of bringing higher awareness to communities.

“It’s just the first step,” she said. “But I think it will help revolutionize consumer behavior.”

Discuss carbon labeling at WasteExpo 2022 on May 11, 2022 during the session, "Chasing Transparency – Carbon Labeling." Join us for this session that will be so unique, you can’t Google it. It will bring together perspectives beyond the waste industry to discuss a topic so nascent that the industry isn’t talking about it yet: carbon labeling.