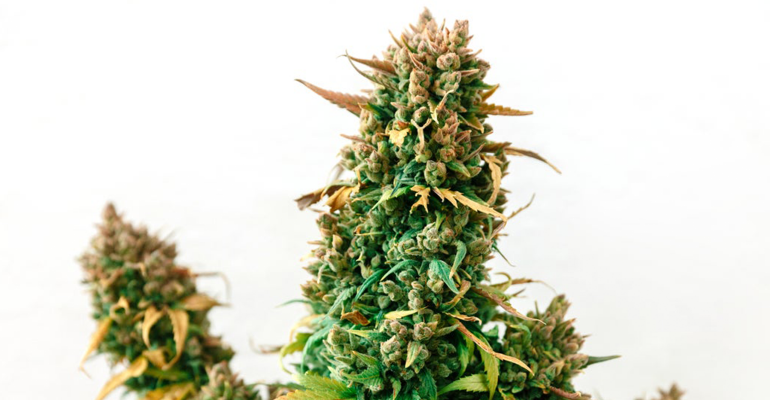 Two students walk into a college classroom, bond over cannabis and launch a packaging venture in an emerging industry. While this might sound like the plot for a movie, this is where Sana Packaging’s story begins.

As grad students at the University of Colorado in Boulder, company founders Ron Basak-Smith and James Eichner both pursued the same focus: sustainability and the circular economy. They also shared similarities in courses taken, music taste and, most notably, cannabis. Co-Founder and CSO Eichner explains that while neither party had experience in packaging or the industry, a gaping hole in sustainable, recyclable options drove them to found Sana Packaging in 2016.

“Neither of us really had prior experience in the world of packaging, other than also being consumers of packaging –frustrated consumers on packaging, especially when it came to cannabis,” Eichner says. “It was one of the big things we noticed – both living in Colorado –  during the time when the state went from black market to medical and then medical to recreational. Along with all the positivity, we saw legalization bring to the culture and the economy and whatnot, we also saw some kind of some big glaring, negative externalities that were being created by the industry.”

From the get-go, the most notable problem the duo could see was the majority of cannabis packaging manufactured was polypropylene-based, which globally has a 1% recycling rate compared to other types of plastics that have much higher recycling rates such as PET or HDPE. While advancements continued on the cultivation side of the industry to address sustainability – from lighting technology to irrigating – little was being done at the end-user level.

“We just saw a really big disconnect between the cultivator and the product and the consumer right at the point of sale,” Eichner says, “and that was in the form of this just really bottom-of-the-barrel plastic packaging that was being used to package a product that often a lot of care went into producing that product sustainably.”

Five years later, the Wheat Ridge, Colo.-based company has launched packaging solutions to generate circularly in the cannabis industry using 100% plant-based hemp plastics, 100% reclaimed ocean plastic and other innovative materials. As of January 2021, Sana Packaging has diverted 58 tons (116,000 lbs) of plastic waste from the ocean for its packaging.

Its mission is to flip the linear "take-make-dispose" economic model and develop solutions that eliminate waste and pollution, keep products and materials in use and regenerate natural systems. However, this cannot be achieved without overcoming significant barriers to entry, especially in an industry not accepted at the federal level.

While there was a “wide-open opportunity” for a sustainable packaging startup to exist in cannabis and significant market share for the taking, the regulatory environment and “very physical barriers” proved to be a difficult puzzle to solve, Eichner says.

“Cannabis is a perishable product that needs to be preserved to have as long of a shelf life as possible/ So, things like product preservation create certain challenges around sustainability in terms of the materials that you can use,” he says. “From a regulatory standpoint, something as simple as everything having to be in child-resistant packaging creates this own unique challenge for sustainability because in order to create a child resistant locking mechanism, that typically requires greater wall thicknesses for the packaging around those locking mechanisms that, for instance, could can make it really difficult to create a compostable cannabis packaging product.”

Because of the wall thickness requirement, Sana’s hemp plastic packaging is currently not certified compostable, despite being made from all compostable inputs. Eichner says the locking mechanism hinders the product from breaking down and the 90- to 180-day period that is required for an item to be certified compostable.

“And of course, that leads us to a whole litany of other issues with the waste management system that not just cannabis packaging, but that all packaging is interacting with at the end of its useful life,” Eichner says. He points to the fact that only 5% of those who live in the United States have access to composting, the majority of which is limited to food and yard waste.

With varying packaging requirements on a state-by-state basis because of the legality of the industry, Sana Packaging tackles each subtle difference with a calculated effort.

“For instance, Colorado requires cannabis packaging to be opaque. California does not. So, in California, we see a lot of glass packaging, a lot of transparent plastics. And in Colorado, we see very little glass unless it's frosted or tinted,” Eichner says.

While packaging challenges have largely centered around child-resistant containers, Eichner says the industry must push legislators to distinguish between activated and non-activated products.

An activated product is defined as a pre-made edible that doesn’t need heat to activate cannabinoids such as THC. Cannabis flower is non-activated and requires to be smoked, vaped or some other method of heating.

“We understand why the regulations are the way they are. They were on one part created by people who don't know much about cannabis,” Eichner says. “On the other hand, they also were created to try and make as many people as possible comfortable with the idea of legal cannabis. I think these really strict child-resistant regulations were a very useful tool in making a lot of uncomfortable people comfortable, and that's great.”

While it served a purpose, it doesn’t make sense to have child-resistant packaging for non-activated products, Eichner continues. A simple designation of how cannabis can be consumed could have a “tremendous impact” on the environmental aspect of the industry. With the availability of new materials, sustainable packaging also can be offered at a lower price point. However, Eichner says this type of change won't be seen unless legalization progresses at the federal level.

While there are no plans to integrate into other verticals, the willingness of the cannabis industry to pay a premium for sustainable packaging allows Sana Packaging to develop and test materials before they are brought to scale.

“The cannabis market, because of its willingness to pay, is a really ideal place to introduce these emerging packaging materials that are not yet commodity materials to the marketplace and kind of build-up traction for these materials,” Eichner says. “As the supply chains for these materials reach greater and greater economies of scale, eventually our hope is that they will reach a point where they will be able to be used by other, more price-sensitive industries.”

Referencing the regulatory environment once more, Eichner says that the typical cannabis consumer is not able to touch, smell or feel products like shoppers at a produce section of a grocery store. Because of this, effective packaging is crucial to sales.

“If you're in [a dispensary] and you're looking at a bunch of different products that you can't touch or smell, packaging is going to be how you relate to folks,” he says. “ So, if you view sustainable packaging as premium packaging, that's kind of a really good way for a brand to tell a certain story at the point of sale that will hopefully resonate with more customers than someone else's packaging that's not sustainable. So, I think there's that whole mentality to it as well.”

Sustainable packaging increasingly is becoming more of a goal for companies and something consumers will expect from brands, Eichner says. However, producers need to step up when it comes to their environmental and societal responsibilities.

With what is becoming the dawn of producer responsibility as more companies release Environmental, Social, and Corporate Governance (ESG) goals, it is imperative to change the perception that it is the consumer’s sole role to reduce waste.

“When we onboard a customer, we provide them with a bunch of marketing assets to help them integrate our packaging, or their packaging decisions in general into their brand story and their marketing,” Eichner says. “We also really try to like commend our customers and really get the point across to them that the decision they're making is incredibly important because they are making a decision as a producer that will then make it so that their consumers are not the ones that have to make that decision. It’s not just punting every responsibility to the consumer.”

He concludes, “that's what I hope to see in the world of sustainable packaging -  not just more consumers demanding it, but more producers taking it upon themselves to make the better decision so that the consumer doesn't have to.”