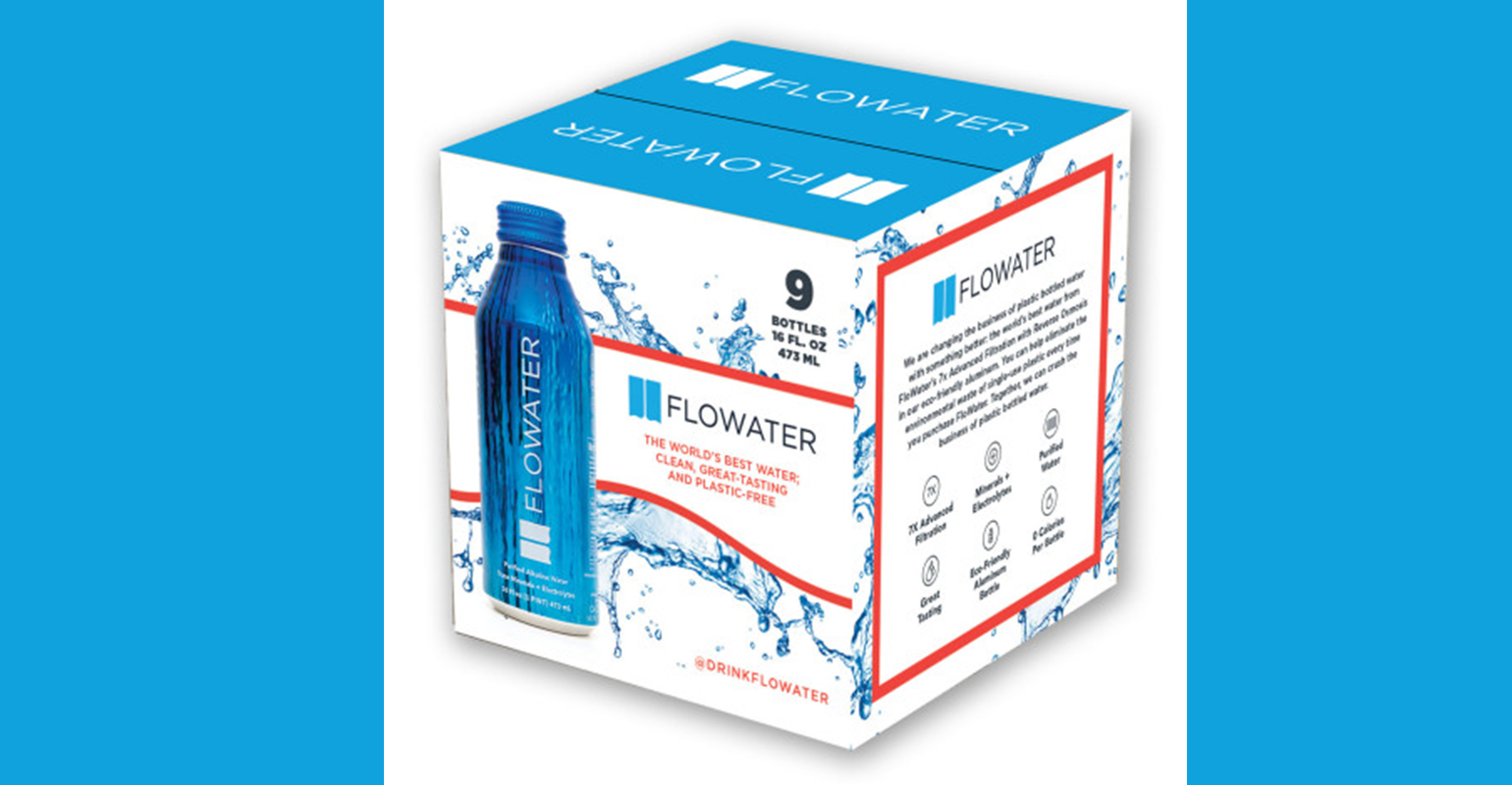 DENVER--Recognized as one of America’s fastest growing companies, FloWater today announces its move into consumer markets with the rollout of FloWater in aluminum bottles. Since its launch in 2013, FloWater has dispensed over 330 million fills of water through its new-tech Refill Stations at thousands of locations nationwide and overseas—from the world’s best-known companies, hotels, gyms, and schools to TV and movie sets and at popular concert venues.

With FloWater now available in aluminum bottles for consumers on-the-go, the Company expands its platform as a sustainable alternative to single-use plastic water bottles. An end-to-end solution for consumers, FloWater provides clean, great-tasting and trusted water with three proprietary products: Refill Stations where consumers work, rest and play, FloWater Faucet Filters for their homes and FloWater for consumers on-the-go in infinitely recyclable aluminum bottles, which will be available as a sustainable alternative wherever bottled water is sold or provided.

FloWater on-the-go in aluminum bottles utilizes a proprietary, advanced filtration and purification technology, including reverse osmosis, that removes up to 99.9% of all impurities, viruses, heavy metals and microplastics, while re-mineralizing and alkalizing the water. A coconut carbon filter ‘finishes’ the water, resulting in a clean, crisp taste.

The vast majority--76% of Americans--do not trust their tap water, which has led to a dramatic increase in the consumption of bottled water. With recycling rates for plastic water bottles declining, an estimated 35 billion plastic water bottles are ending up in our landfills, oceans and waterways each year, while increasing microplastic contamination in our drinking water and food supply.

“The entire consumer marketplace is rapidly moving towards responsibility without compromise,” says FloWater CEO and Co-Founder, Rich Razgaitis. “Just as the car industry is shifting from antiquated fossil fuels to EV and the centralized power grid is moving to decentralized solar grids, an identical shift is underway with drinking water. By moving to decentralized distribution, and environmentally-friendly alternatives, FloWater is building out a platform for providing the world’s best and most trusted water—anywhere consumers work, rest and play.”

FloWater has become the beverage of choice at popular concert venues like Coachella, Live Nation, at the X-Games and the U.S. Open of Surfing and for employees at America’s leading businesses, such as Google and Red Bull. The company has gained widespread acclaim during the pandemic for its work with schools to safely reopen with fully ‘touchless’ FloWater Refill Stations that replace archaic, communal water fountains.

For the retailer, FloWater on-the-go in aluminum bottles offers a superior-tasting and plastic-free water to resell without any loss of margin, while aligning the retailer with the consumer shift to mission-driven brands that provide environmentally responsible products without compromise.

FloWater on-the-go is available in 16 fl. oz. aluminum bottles and offered in both single and 9-pack configurations. Available for purchase now online at www.drinkflowater.com, FloWater on-the-go will soon be available at select retailers nationwide.

Recognized in 2020 by Inc. and the Financial Times as one of America’s fastest growing companies and honored by Fast Company as a World Changing Idea, FloWater is the world’s first company building a platform for delivering safe, great-tasting, and plastic-free drinking water for consumers at work, at home and on-the-go. FloWater is on a mission to transform an outdated distribution and delivery system for water—and to redefine tap water—while eliminating plastic waste. Today, some of the world’s best brands hydrate with FloWater, including Hyatt, Google, Red Bull, Play Station, Specialized Bikes, Microsoft, Club Pilates, Hulu, Urban Remedy, and O’Neill. FloWater delivers meaningful impacts for health and well-being, boosting hydration 200-500% while reducing the consumption of coffee and sugary beverages by 50%. Since the company’s launch, FloWater has saved over 330 million plastic water bottles from entering the environment and are on target to hit one billion by the end of 2022. For more information, visit www.drinkflowater.com and follow FloWater on Facebook and Instagram.