Fashion Made from Greenhouse Gases? 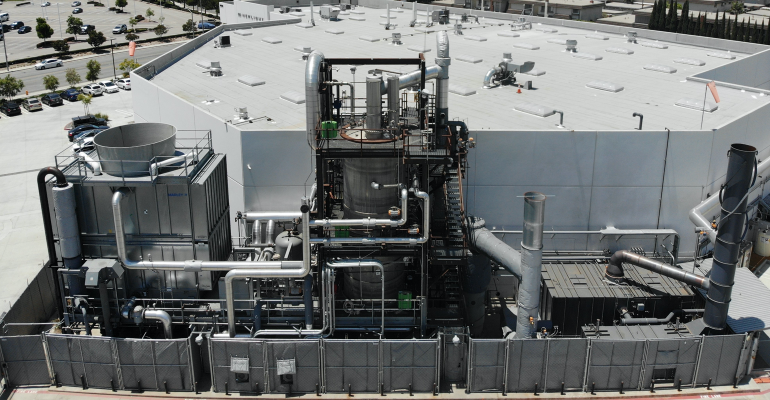 A Huntington Beach, Calif. biotech company is making eyewear, purses, and other accessories using air and greenhouse gases as feedstock – gases that would otherwise release to the atmosphere. The brand, called Covalent, is one of the first carbon-negative fashion lines in the world, according to Mark Herrema, CEO of Newlight, the parent company of Covalent.

Newlight’s innovation gets some help from microorganisms found in the ocean. They eat greenhouse gases and in doing so produce the biomaterial that Newlight calls AirCarbon, which is melted and formed into products to replace plastic and other materials with more sustainable ones.

“People view greenhouse gas as bad but, in many ways, it is the basis of life. It keeps us warm, and most living things use it to grow. And now, we have product lines that show that these gases can be used to create something beautiful, while we are sequestering the gas and reducing the amount of carbon in the air,” Herrema says.

Newlight recently began to put the material into a totally different line: ocean-degradable food ware such as straws and cutlery, branded as Restore.

AirCarbon evolved from an idea that first sprouted after Herrema read a newspaper article about methane emissions and a cow named Lucy.

“Lucy was at Washington State University and scientists used her as a study subject to analyze greenhouse gas emissions [Cow burps generate plenty of them].

The article talked about the need to reduce these emissions. It got us thinking: There must be natural ways to capture greenhouse gases and convert them into useful materials,” Herrema says.

It wasn’t much later that he and partner Kenton Kimmel came across the finding about the ocean microorganisms—that they eat greenhouses gases for food and turn them into biomaterials.

“We decided to work to replicate that process on land, and that took a long time to figure out how to do. We spent 10 years in research and development finding the right microorganisms and what made them happy so they could produce AirCarbon in a volume to commercialize it,” Herrema says.

It took Herrema and Kimmel 15 years to go from working out of a small test tube to cranking out material in a 50-foot reactor.  Once they verified they could make a biomaterial at commercial scale they began exploring what products they could manufacture with it.

“We kept working to make the process better and bigger, which led to our first fully integrated commercial-scale AirCarbon production plant, which we just commissioned,” Herrema says.

The food ware is available wholesale to restaurants, universities, hotels, and other businesses with food services through the Restore website.

Covalent products are stamped with a carbon date that consumers can enter on the website to learn of every step in the production process, as well as the carbon footprint associated with that entire process.

These are not Newlight’s first AirCarbon products. The company has made furniture and electronic accessories, sourcing methane from landfill gas, dairy farm gas, and abandoned coal mines. Though for the Covalent lines and Restore the greenhouse gases come primarily from abandoned coal mines.

SCS Global Services did a lifecycle analysis on both the Covalent and Restore products, looking at carbon impact at phases to include raw material extraction, transport of raw materials, and manufacturing.

“Raw material extraction is where the negative carbon footprint occurs, due to the recovery of coal mine methane as well as because greenhouse gas is used as raw material,” says Karen Righthand, SCS Global Services’ managing director of Corporate Sales and Marketing.

Manufacturing phase impacts were found to be very low, due to use of renewable energy during production. The most impact was at the transportation phase for some products, but Righthand confirms, “The product is in fact carbon negative when it leaves the manufacturing facility.”

AirCarbon has received several awards, with a few being “Biomaterial of the Year” bestowed by the Nova Institute; “Innovation of the Year” from Popular Science; and the Presidential Green Chemistry Challenge Award from the U.S. Environmental Protection Agency.

Herrema’s message to the fashion industry, who on an industry-wide level is notorious for contributing to a big waste problem and heavy carbon footprint:

There are other ways to manufacture and benefit the environment.

“I hope that what we are doing gives a sense of empowerment that they can be part of reducing carbon in the air. And in the case of AirCarbon, we would like people to see that there are new considerations for things we can do with greenhouse gases.”