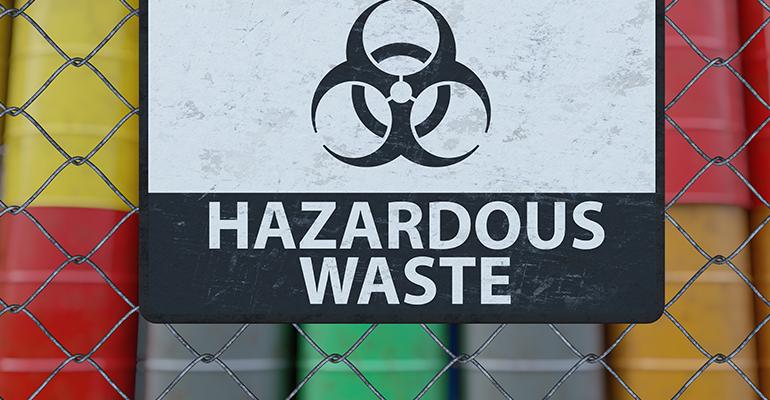 Some recyclers have done their research and found a niche in hazardous waste recycling, but learning the ins and outs takes time and work.

Not all hazardous wastes are disposed of; some are recycled and are no longer considered a hazardous waste. However, the companies that process these material types step into a different ballgame, with unique and often complex rules. Sometimes, there is gray area around those rules and even around definitions to determine what’s a hazardous waste and how to manage it. So, learning the ins and outs of hazardous waste recycling takes time and work.

Some recyclers have done their research and found a niche in hazardous waste recycling. In 2017, more than 1.5 million tons of such materials were recycled, according to the U.S. Environmental Protection Agency.

“Let’s say you have a spent solvent in a drum. If you dispose of that material, it’s a hazardous waste and must be managed at a hazardous waste facility,” explains Phil Comella, a partner at law firm Freeborn & Peters, based out of Chicago.

But, Comella adds, “If you recycle this drum, you can take another route: When you reuse it to make a product, it substitutes for a raw material. And if it replaces a raw material, it’s not considered a solid waste anymore; now it’s a product.”

There are two categories of hazardous waste—one explicitly spells out what materials are typically considered hazardous waste, if they are disposed of. The other category is less defined.

To add another layer of complexity, one condition for exclusion in many scenarios is that the waste must be reclaimed (or treated) prior to reuse, as commonly done with solvent as one example. Sending solvents to a distillation unit to make a new product is cheaper and more environmentally friendly than burning or landfilling it, says Comella.

One category of hazardous waste is called “Characteristic” hazardous wastes, which have characteristics including ignitability, toxicity, corrosiveness and reactivity. They require testing to determine if they are hazardous, for instance looking at toxicity levels.

The second category is “Listed” hazardous waste, meaning these materials are listed in federal regulations. They have residues generated from industrial processes and are deemed hazardous, regardless of contamination level. An example is dust from an electric arc furnace.

Clean Earth, Inc. has eight hazardous waste processing facilities that collectively work with multiple streams, doing the initial processing for recycling or reuse, then sending materials out for further processing.

“We process to render these materials non-hazardous and then sell in the open market for reuse. A lot of it goes to steel mills, foundries and other processing facilities that use these materials in place of raw materials,” says Jeff Saal, vice president of sales, Haz Division Clean Earth Inc. based in Sewickley, Pa.

Clean Earth's highest volume material is aerosol cans from manufacturing sites. The company extracts butane, propane and butadiene to depressurize the cans, sends out metal and plastic to be recycled and and sends out the affluent for fuels blending.

The aerosols are managed at its Morgantown, W.Va., facility. Clean Earth bought a company housed there. The facility’s original use was reactivating carbon.

“We bought that company’s permit solely to be able to receive hazardous waste, and it turned out we found a need for aerosol can processing. We modified the permit to be able to process these cans and retrofitted the existing system as we saw a market need to do this instead of sending these cans for incineration,” says Saal.

Hazardous waste recyclers should budget for contingency planning, especially for storage, to be prepared for an influx of material, advises Chris Lund, GBB principal in McLean, Va.

“They can get in trouble when they don’t plan appropriately. So, they must have subcontracts in place with haulers if the generator suddenly produces more and [the recycler] doesn’t have sufficient equipment to handle it. They must be cognizant of maximum quantities that can be stored in one place and for what period,” he says.

The possibility of contamination is also a concern. Take, for example, the growing industry of hemp production and its associated recycling.

“This material could be composted, so you must mix it with other materials at a certain ratio for it to not be considered a hazardous waste. If you don’t get the mix right, once you test the material, you could learn that it’s contaminated and rendered unmarketable,” he says.

Comella offers advice to anyone considering recycling hazardous waste: “Consult the regulations and audit your processes and business plans against the regulations. And I would consult with environmental legal counsel or an environmental consultant to make sure your plans will satisfy requirements for recycling, which are stated in the code of federal regulations.