Cleanup of the DAPL Protest Camp is Underway 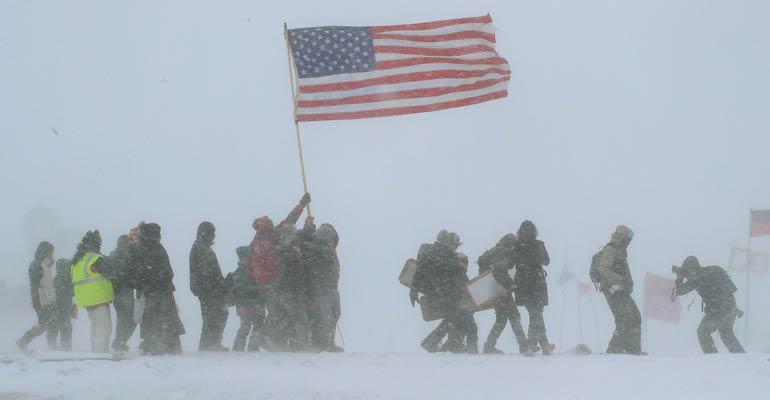 This cleanup process is part of the Standing Rock Sioux Tribe’s Water Protector Clean Up Plan, which has a goal of moving and cleaning up waste from the site before the anticipated floods come in the spring.

Native Americans and environmentalists alike camped out at the Oceti Sakowin Camp in Cannon Ball, N.D., for months, protesting plans for a $3.7 billion, 1,1720-mile crude oil pipeline that they claim would contaminate water and damage sacred burial grounds. And now, after months of protesting, President Donald Trump has signed two executive actions to escalate approval of the Keystone XL and Dakota Access Pipeline (DAPL) and protestors have evacuated the camp via an eviction notice from the Corps of Engineers, leaving behind massive amounts of waste like abandoned tents, teepees, sleeping bags, blankets, canned goods and garbage.

To clear the site in a timely manner, the Standing Rock Environmental Protection Agency, the Standing Rock Sioux Tribe, Dakota Sanitation & Roll-Off Service Inc., Thunder Valley Community Development Corp. and other local organizations are working together to collect and haul the waste to a Bismarck, N.D., landfill by using machinery like loaders, dump trucks, an excavator, skid-steers and roll-off trucks.

In addition to regular waste cleanup, the cleanup crews are also being advised to look out for bodies of people who may have died during the dangerous snowstorms that passed though the camp in December 2016.

“The cleanup began the last week of January, and we expect to remove about 250 loads of trash from the site,” says Dakota Sanitation & Roll-Off Service Inc. President Rick Anderson. “Unfortunately, recycling of the materials is not an option because the materials are all mixed in with snow and ice, which makes the materials almost impossible to recycle at this point.”

This cleanup process is part of the Standing Rock Sioux Tribe’s Water Protector Clean Up Plan, which has a goal of moving and cleaning up waste from the Oceti Main Camp and Rosebud/Sicangu Indian Reservation before the anticipated floods come in the spring.

“It is paramount for public safety, and to prevent an environmental disaster, that the camps be cleared prior to a potential spring flood,” North Dakota Governor Doug Burgum said in a statement. “Once the floodwaters recede, the land will need to be cleaned and eventually restored to pre-protest conditions.” But while the cleanup has been underway for a couple weeks, cleanup crews expect that it will take several more weeks before the camp is completely cleared of debris.

“It’s a mess out here, and it will take about 2 ½ to 3 ½ weeks to clean up,” says Anderson. “Right now, we have seven trucks hauling the waste, and it’s about a 3-hour turnaround per load because it’s 115 miles each way to and from the landfill. But even though we are left cleaning up the mess, this task has brought the public, the law enforcement and local community members together.”