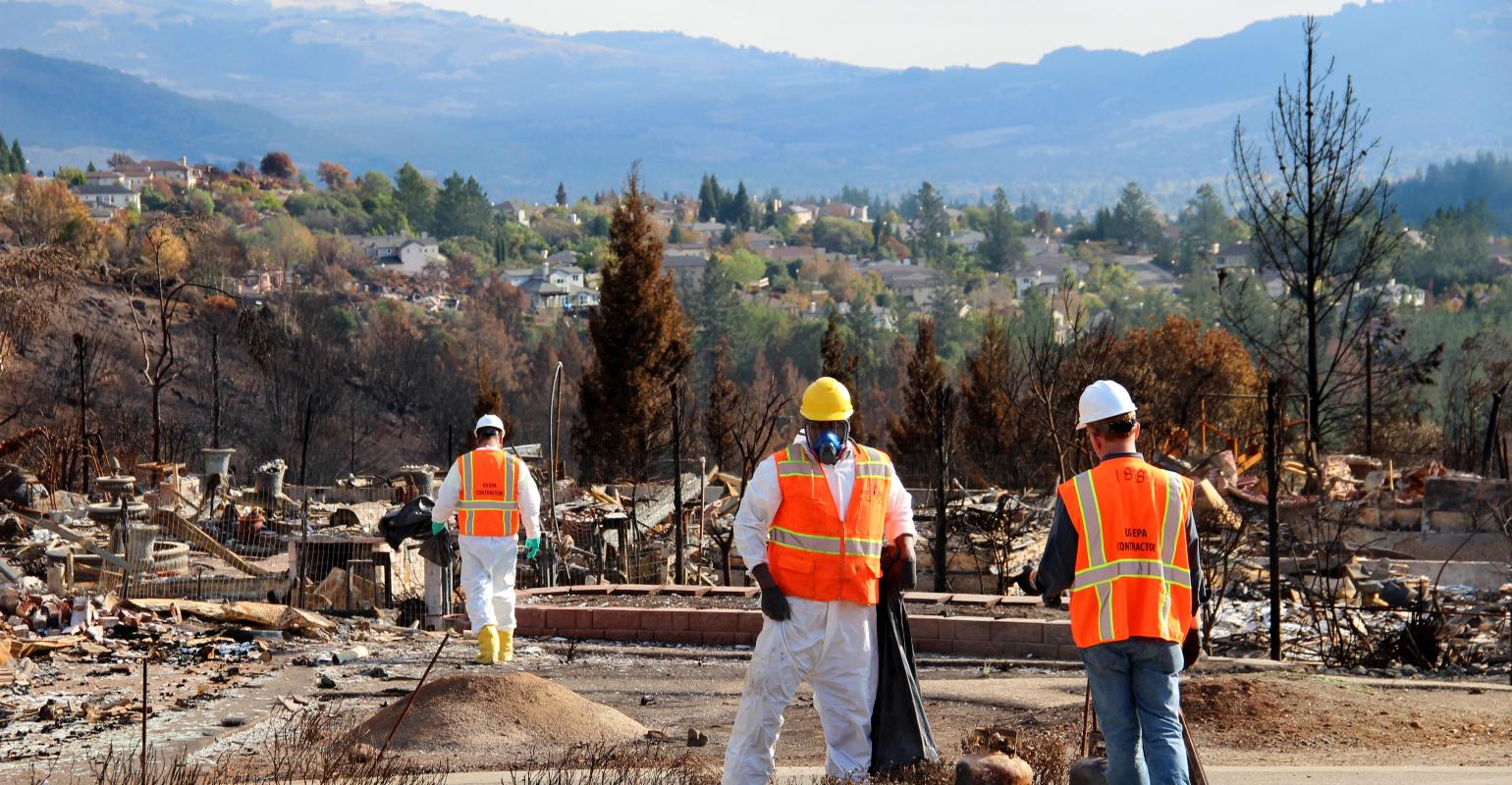 The EPA, USACE, CalRecycle and others have worked to clean up debris, ash, solid waste and hazardous waste from properties affected by the wildfires.

Nearly two months after wildfires scorched Northern California, the state is yet again experiencing raging wildfires, this time down south.  These fires, which are being caused by strong winds out of Santa Ana, are being dubbed the largest wildfires in the state to date.

Since October, thousands of firefighters have worked to contain and extinguish the wildfires, and the U.S. Environmental Protection Agency (EPA), the U.S. Army Corps of Engineers (USACE), California Department of Resources Recycling and Recovery (CalRecycle) and others have worked to clean up debris, ash, solid waste and hazardous waste from properties affected by the wildfires.

“As far as I’m aware, the wildfire in Northern California is the state’s largest wildfire yet,” says Steve Calanog, incident commander for the EPA. “The wildfire reached more than nine counties, all consisting of different types of terrains and distances. That posed many challenges for us because we couldn’t always get access to the affected properties due to destroyed bridges, blocked roads and unavailable communication systems.”

To date, the EPA has collected 4,085 tons of household hazardous waste, including 1,317 cubic yards of asbestos containing materials, from nearly 7,000 properties in Sonoma, Napa, Lake and Mendocino Counties, and the USACE has processed 4,813 rights of entry and cleared more than 288,055 tons of debris from 880 properties in Mendocino, Lake, Sonoma and Napa Counties. That collected waste has since been brought to staging areas, separated into different waste streams and hauled to various disposal facilities throughout the West Coast.

“There were thousands of homes that lost everything during the wildfire, and there were some residential and commercial properties that only experienced minimal damage,” says Calanog. “Initially, we were just tasked to work in Sonoma and Napa Counties, which is where the majority of the impacted residential properties were, but as the situation evolved, we were asked to assist with additional properties in Lake and Mendocino Counties.”

In addition to the cleanup of household hazardous waste, the EPA’s response activities include coordinating and implementing Emergency Support Function 10 (Oil and Hazardous Materials) operations as part of the Federal Emergency Management Agency’s (FEMA)  Initial Operating Facility, which is operating out of the State Operations Center in Mather; assisting Sonoma County and California agencies in cleanup operations for a tire fire that had occurred near Highway 37/Lakeville Highway;  coordinating the safe removal, transport and disposal of hazardous and non-hazardous debris with California agencies, FEMA and USACE; meeting with tribes that have expressed interest in cleanup efforts; and working with California and tribal governments to track the status of more than 150 public drinking water systems, some of which have been damaged, destroyed or otherwise affected by the fires.

The EPA is handling the first phase of the cleanup, which consists of clearing asbestos and more than 25,000 different types of hazardous waste, such as paints, solvents, automotive oil and batteries, pesticides, fertilizers, pool chemicals and ammunition, from damaged properties. And the USACE is managing the second phase, which consts of removing ash, debris and concrete foundations from affected properties. “The planning process and assigning roles and responsibilities is done early on during a natural disaster response situation,” says Calanog. “In this particular situation, the planning began while the firefighting aspect of the disaster was taking place.”

Over the past week, CalRecycle has also assisted in the cleanup efforts, expanding its wildfire debris removal operations in Butte, Nevada and Yuba Counties and bringing in 10 additional crews to clear destroyed properties. As part of the Consolidated Debris Removal Program, CalRecycle is working in coordination with the Governor’s Office of Emergency Services and other state and local partners on the ongoing fire recovery efforts.

“CalRecycle and its contractors continue to make progress to complete the safe removal of wildfire debris as quickly and efficiently as possible,” said Scott Smithline, director of CalRecycle, in a statement. “Our top priority is the safety of homeowners and the environment–both during this debris removal process and in the future when communities rebuild.”

If you have any updated information on the ongoing cleanup efforts, please email Senior Editor Mallory Szczepanski at Mallory.Szczepanski@informa.com. Waste360 will continue to update this article with new information as it becomes available.