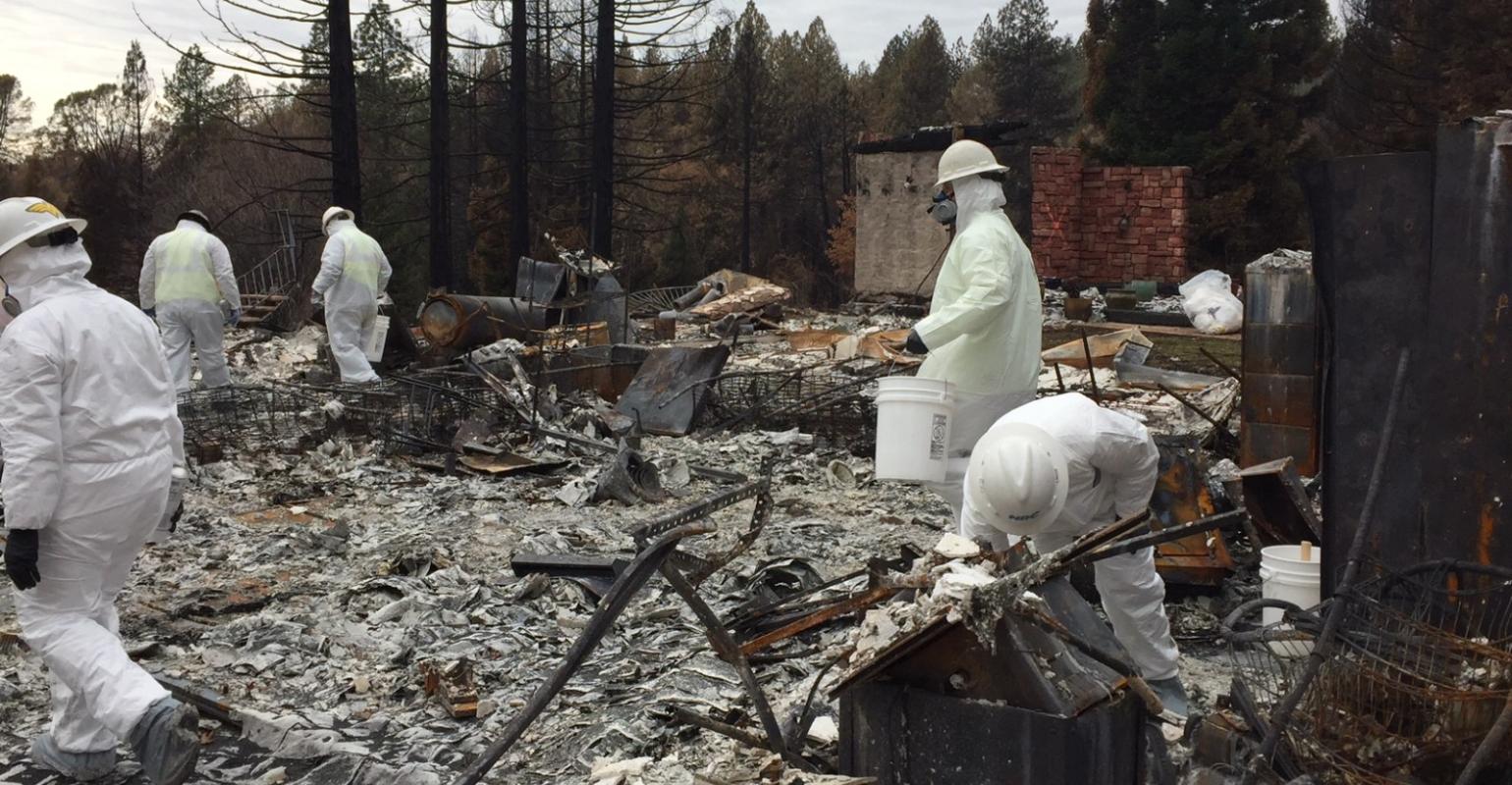 State-managed debris removal programs have been established to clear household hazardous waste and fire debris from more than 14,000 properties.

The Camp, Woolsey and Hill fires that devastated three counties in California a month ago are estimated to leave five to seven times more fire-related debris than the 2017 wildfires—which generated around 2.2 million tons of debris. Those were the projections made by Federal Emergency Management Agency (FEMA) Regional Administrator Bob Fenton during a media call on Tuesday.

“Last year, during the fires in Sonoma County, we indicated the debris in that event was the largest amount we had seen in modern time in the state of California—actually since the 1906 earthquake,” explained Mark Ghilarducci, director of the Governor’s Office of Emergency Services, during the December 11 call. “Unfortunately, this event will be orders of magnitude more than that and now the new record for the largest debris operation that we’ve embarked on.”

The California Department of Resources Recycling and Recovery (CalRecycle), in partnership with the Governor’s Office of Emergency Services (Cal OES); Butte, Los Angeles and Ventura counties; the California Department of Toxic Substances Control (DTSC); the U.S. Environmental Protection Agency (EPA); FEMA; and other federal, state and local partners, has begun the process of clearing debris following the most destructive series of wildfires in California history.

State-managed debris removal programs have been established in Butte, Los Angeles and Ventura counties to clear household hazardous waste and other fire debris from more than 14,000 properties destroyed by the Camp, Woolsey and Hill fires.

“On Monday, Butte County opened a Right-of-Entry Center for people to participate in the debris removal program,” noted Ghilarducci. “Removing the debris is vital. The sooner we can get the debris addressed and out of the way, the sooner the long-term recovery and rebuilding can begin.”

Phase 1 of the program began on December 3. Crews managed by DTSC and EPA are removing household hazardous waste, such as paints, cleaners, solvents, oils, batteries, pesticides, compressed cylinders and tanks and easily identifiable asbestos. The estimated timeframe for this portion of the project is four to six months.

Phase 2’s preliminary damage assessments began November 28 by CalRecycle crews. Following the removal of household hazardous waste, CalRecycle-managed contractors will remove the remaining asbestos, assess and document properties, as well as contaminated soil, ash, metal, concrete and other debris to restore properties to pre-fire conditions. Debris removal operations for Phase 2 are expected to begin somewhere around the week of January 7, 2019.

“We believe it will take up to a year to address the debris we are talking about,” Ghilarducci stressed. “If everything goes according to plan, we should have trucks starting to move debris around January 14.”

Debris removal will be a collective effort but provided by and facilitated through CalRecycle. To participate in Phase 2 of the state-managed debris removal program, owners must grant cleanup crews access to their property by returning signed Right-of-Entry agreements to their local government.

Additionally, the U.S. Army Corps of Engineers will help facilitate the separation and coordination of various concrete and steel debris to ensure materials are appropriately sorted and cared for.

“We are looking at all sorts of ways to reduce the metals and concrete, so they can be reused,” noted Fenton, adding that DTSC and EPA will take care of the asbestos and properly treat and transfer it.

“The good and the bad of it is that we had to go through last year’s event together, but we’ve learned a great number of things to help streamline our operations and be able to apply them in this particular disaster,” Ghilarducci pointed out. “It’s unfortunate that we’ve had to have back-to-back years where we’ve had such traumatic and catastrophic losses.”

“I think it’s safe to say that it’ll take the better part of one year to accomplish the majority of the work that we have in front of us when you look at close to 19,000 structures in the area of Paradise and surrounding communities, as well as our Southern California communities,” he added. “In Paradise, the challenge is that you’ve got limited roadways in and out, and the community itself is made up of small roads. You can only get so many resources in and out of an area quickly and safely and that will all be coordinated carefully.”