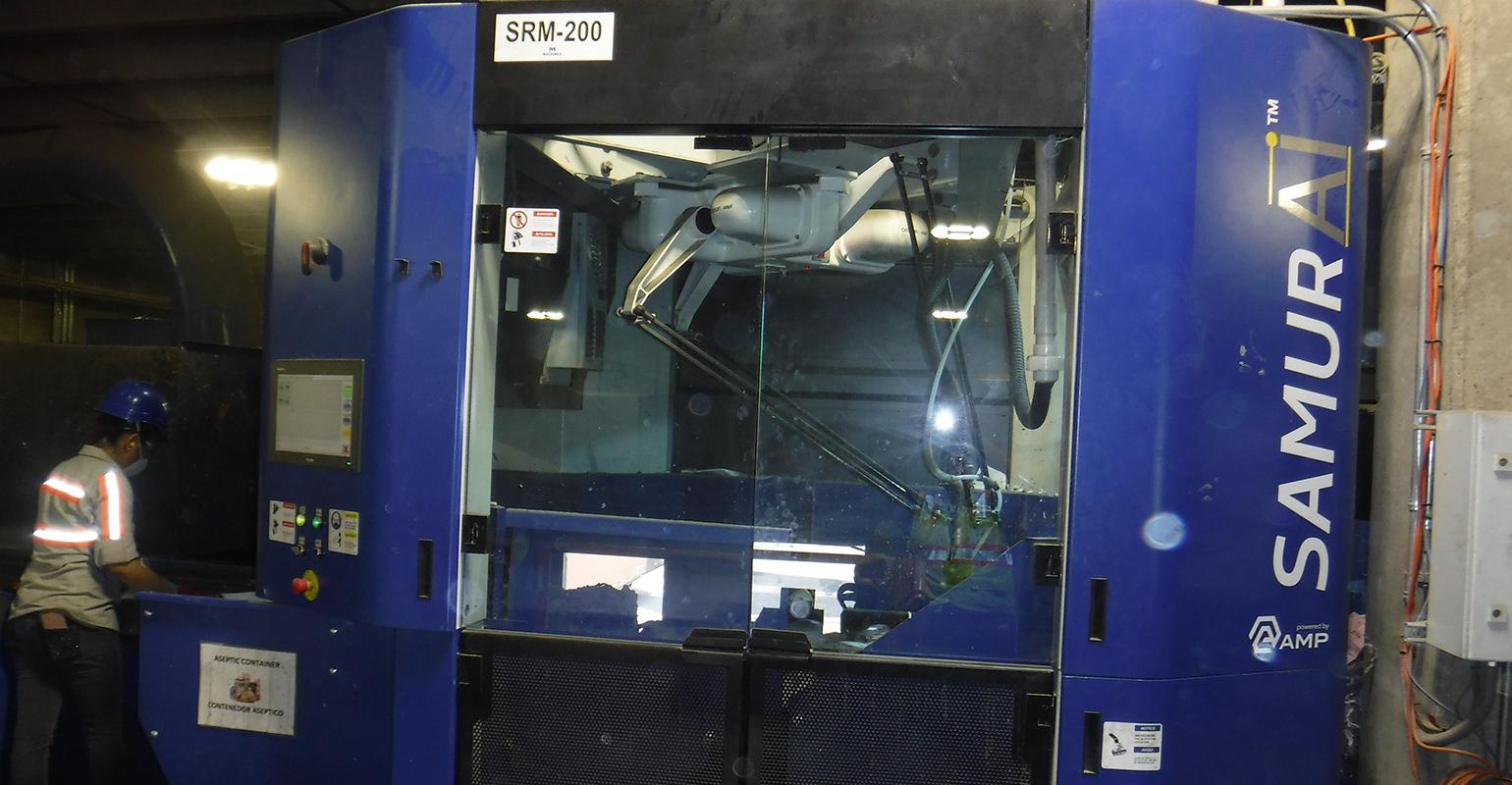 In an effort to speed up high-volume lines and cut costs, the company is using the robot to sort through rigid containers.

The robot works exclusively with rigid containers, including PET, colored and natural HDPE and cartons, for now.

Lakeshore explains it wanted to speed up these high-volume lines while finding a way to cut costs to compensate for problems with another commodity.

“We were looking at SamurAI a year ago when the paper markets fell apart, especially mixed papers,” says Alan Handley, CEO Lakeshore Recycling Systems. “We had to reduce costs to keep our operations’ cash flow neutral or mitigate as much loss as we could. All we could do was remove labor from the sorting line(s). We started looking at automation.”

Lakeshore’s first SamurAI is up and running, and Handley has ordered two more. Each will replace two full-time sorters, which will translate to about $120,000 to $130,000 a year in savings per robot.

SamurAI sits on the line, “watching” and pulling materials, and computing and storing data on them. The fully contained machine has four support arms as well as one production arm with suction cups to pick up material, which it drops in the proper bin.

AMP Robotics, in Boulder, Colo., developed the recognition technology incorporated in the bot.

“I refer to it as the brains and brawn,” says Chris Hawn, CEO of Machinex Technologies, a machinery manufacturer and systems integrator in High Point, N.C., who did the physical build of the enclosure and other components that go around the robot.

Machinex and AMP announced their newly formed partnership to advance SamurAI at WasteExpo in Las Vegas this past April, and the first robot went in at Lakeshore Recycling a month later.

The more the robot sees, the more it learns, not just at one plant but from plant to plant. Systems at different operations can be tied into each other via the cloud and trade data through a “neural network.”

“Say a new shaped chip can came in and another city sees it first and learns what it is. Now my system knows the specs,” says Handley.

He first observed SamurAI in a beta stage, watching to determine if it ran without interruption, how many picks it did in a minute, and if it was picking what it was programmed to pull.

“It’s had to learn my system, but it’s operating as promised. It’s taking materials we want to pick and at a success rate we outlined in our contract,” Handley adds.

He’s been able to reallocate labor to areas with issues the robot can’t address, like the presort line.

“One hundred percent of the material is coming through at presort,” Handley explains. “So, the stack is deep with plastic, paper, cardboard, bike chains, hoses and other materials that have to be removed first, as the robot is currently set up to pick four out of about 10 items.”

So far, the contamination rate appears to be the same, but Handley anticipates over time that figure will drop as SamurAI learns more of the nature of the plant’s materials.

“The biggest thing we will need to see is for production to continue to go up as it learns, until it meets the manufacturer’s stated performance metrics. It’s already doing a little better as far as how quickly and accurately it’s picking,” he says.

For now, a person at the end of the robot’s station makes sure that materials aren’t passing through that shouldn’t be. But Handley hopes to totally phase out quality control personnel in time.

“I think success will be when we don’t see workers other than fork lift drivers and presort in our single stream plant. I would think people on my line will become less and less necessary,” he says.

While SamurAI is set up for single stream, Handley is now looking at other companies’ automated systems for heavier applications like construction and demolition materials.

For now, SamurAI can work with every type of marketable rigid container. For the future, explains Hawn, Machinex will focus its research and development on the fiber side, to work with different fiber grades and remove contamination.

“With everchanging requirements in the fiber market such as with changing global policies, Machinex strives to find the most economical ways to meet tightening standards,” Hawn explains. “And we are focusing on fiber because it’s the primary commodity that’s hard to market.”