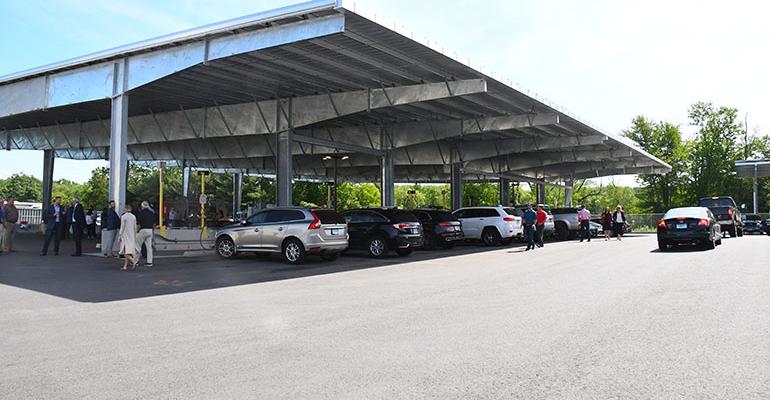 USA Hauling & Recycling has historically prioritized energy conservation and protecting the environment in its business operations. But when the Enfield, Conn.-based company decided to switch from diesel to a cleaner compressed natural gas (CNG) for its trucks, it meant finding a new way to balance both priorities: energy conservation and environmental stewardship. That’s because the units that compress this alternative fuel are huge energy consumers.

So, management decided to install solar to power those compressors at its East Windsor CNG fueling station.

“Our first approach around environmental impact was converting most of our 300 trucks to natural gas. Running natural gas compressors is energy intensive, so if you want the most environmentally friendly fleet, you must look for opportunities to offset that electricity usage with alternative energy. We found solar to be the solution to offset both cost and carbon footprint,” says Frank M. Antonacci, chief operating officer of USA Hauling & Recycling.

Five-hundred kilowatts (kW) that otherwise would have come from the electrical grid feed directly into the CNG compressors.

Overall, it’s a 742-kW solar array system that powers compressors that can potentially provide natural gas for 55 vehicles daily. The company also offers a quick-fill service to the public.

Solar is a long-term investment; these are 25-year-plus projects, so there were multiple considerations.

Management wanted to know that, in doing the math, the developer accounted for increased energy costs and maintenance costs over the life of the project. The waste company researched warranty details, and it researched brands and types of panels, as they degrade at different rates. 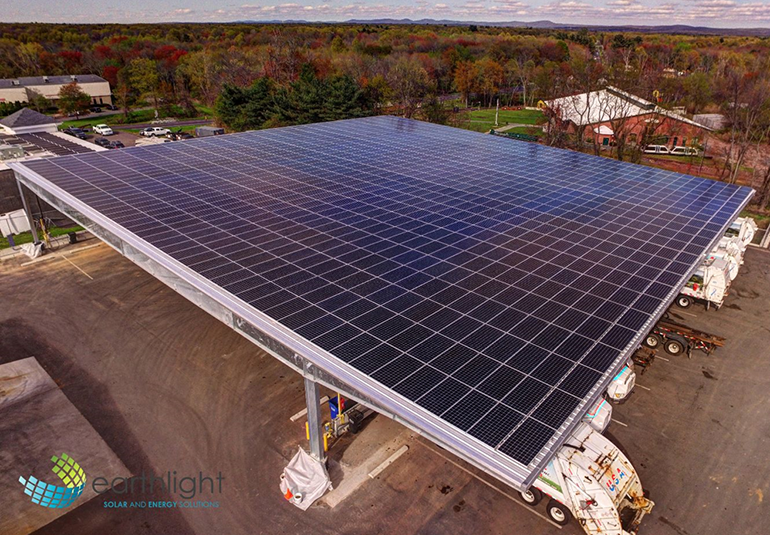 “You also have to research your market when looking at ZREC (Zero Emission Renewable Energy Credits) to see if it will pencil out. You can see the previous years’ payout to get an idea of where the market is,” says Antonacci.

ZREC is a solar incentive program in Connecticut that provides one credit for one kilowatt hour of energy. But how the program pays off varies widely. Connecticut bids were $40 to $150 per ZREC earned to subsidize projects. USA Hauling & Recycling earns about $100 per ZREC.

There’s a caveat: though project investors offset their electrical use, they have delivery charges to bring electricity to their facility, which was yet another consideration, says Antonacci.

But ZREC, charges and Connecticut’s competitive market were only part of what went into strategizing for this project. Other priorities were selecting a reliable installer and designing and building a sturdy system that fit the waste company’s operational needs. It would take two years to move from planning stages to beginning construction of the solar system that has been running since summer 2019.

“We wanted no physical obstacles. The supporting columns needed to be away from the trucks. These columns and the whole structure had to be safe and secure. And the system needed to be maneuverable for our drivers. We approached four developers, and three said that what we wanted could not be done,” says John Maulucci, USA Hauling & Recycling’s financial analyst and solar project manager.

The ultimate decision was to build one roof-mounted solar system and then to build two large truck ports with solar, as only one of two buildings had a roof that could withstand the weight of solar. 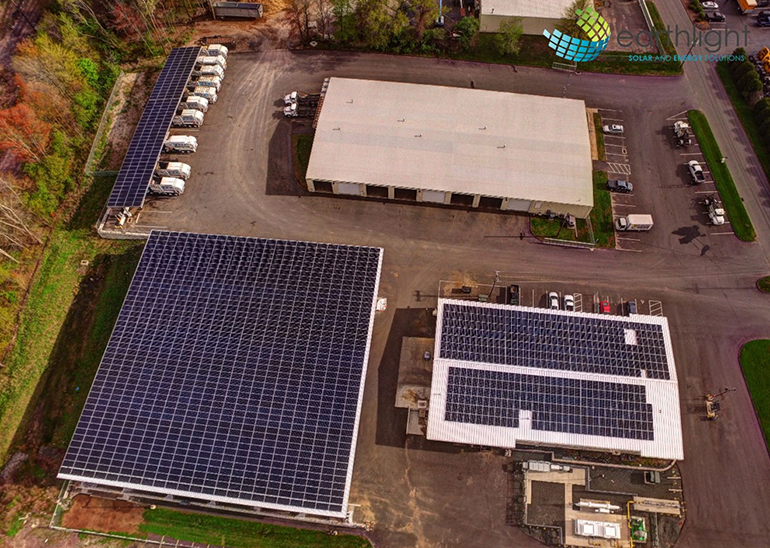 USA Hauling & Recycling installed explosion-proof lighting to avoid a potential event should gas leak under the carport. And because of the large roof required to accommodate the solar array on one truck port, a special gutter system was installed to manage runoff.

“Now the trucks are under cover, which will be a big benefit in the winter here in the Northeast. We won’t have to clear off snow, and it’s safe for drivers to enter and exit vehicles on dry ground,” says Maulucci.

Earthlight Solar & Energy Solutions did the design and installation and had done other projects for the company.

“This particular project was unique because first you have these trucks going out to pick up materials to be recycled. They are running on a cleaner gas than diesel. And you leverage solar to power these energy-consuming compressors required to use this alternative fuel. So, every consideration in this operation is focused on sustainability—on diverting and recycling—but in a way to minimize carbon footprint as much as possible,” says Tim Schneider, CEO of Earthlight.

USA Hauling & Recycling also has solar installations at its corporate operations and at some of its auxiliary businesses. The waste company is in the process of installing solar to offset power at its construction and demolition recycling center in Stratford, Conn.