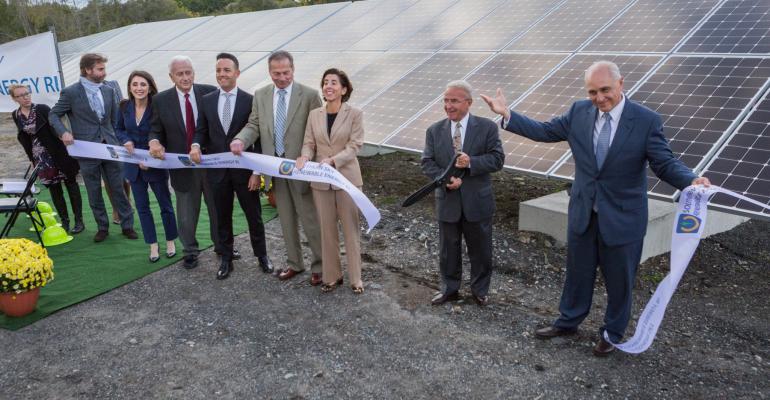 North Providence, R.I., has launched a 2.6-megawatt (MW) solar system with more than 6,700 panels on its closed landfill. Through the 25-year contract with Southern Sky Renewable Energy, it will power municipal and school buildings and tap into three monetary streams: land lease payments, tax revenue and energy savings.

“New England has a dense population and is well developed, so it’s hard to come by enough land for projects like this, particularly in Rhode Island,” says Lindsay McGovern, vice president of Southern Sky Renewable Energy Rhode Island.

Further, solar projects on landfills and brownfields are more complex than in the limited other spaces that are available. But the town was motivated, being part of a state with a goal of 1,000 MW of renewable energy by the end of 2020. And Rhode Island has put in policy to help get there, namely around virtual metering and a renewable energy growth program.

With a virtual net meter system, power is converted to alternate current electricity, which goes through a revenue meter that reports kilowatt hours to the grid. The system enables this capability without the solar array attached to the buildings it’s powering. It’s a way to sell solar to eligible counter parties, including state and quasi-state agencies, municipalities, public schools, nonprofits, hospitals, the federal government and private schools.

This model and another incentive were important.

“Between the virtual net metering program and a $350,000 Rhode Island Commerce Corporation renewable energy grant, we were able to make it a project,” says McGovern.

What has also made similar projects incentivizing in the region is Rhode Island’s Renewable Energy Growth Program. Developers can apply to sell their power on a long-term basis back to the National Grid, the state’s main utility. The program targeted generation of 160 MW of installed capacity by 2020 and has since been extended to 2029 with an additional 400 MW. 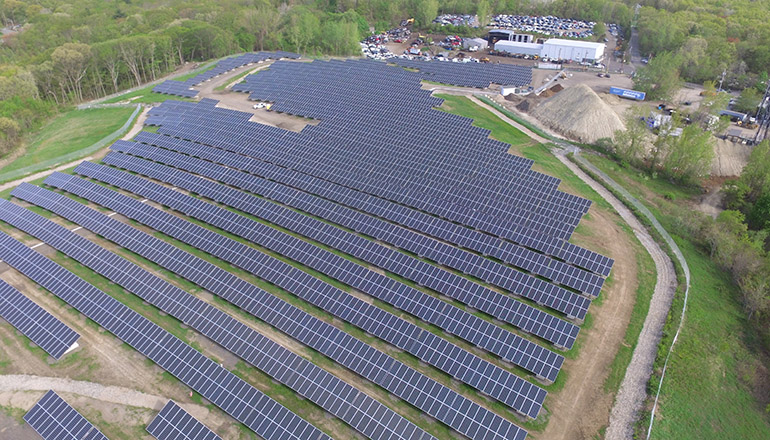 The town’s landfill solar project required collaboration with multiple parties—the state Office of Energy Resources, which oversees incentive programs; the Department of Environmental Management, which approves plans and offers grants for brownfields; and the National Grid, which provides the interconnection.

But the town of North Providence, Southern Sky’s customer, was among its closest partners.

“They were part of every major decision. The town council had to approve this project, so we needed the mayor’s support, and he helped us navigate the permitting steps. They’ve owned this capped, decommissioned landfill for years, so we learned relevant history through them to understand the state it’s in and what needed to be done to successfully develop and construct this solar system,” says McGovern.

The site was overgrown with brush that had to be cleaned out. Washout from rain and wear from dirt bikes and ATVs had to be addressed. And a ballast racking system was installed to ensure the cap remained secure. The structure is composed of rectangular blocks that sit on top of stone to support the whole system.

The solar project is offsetting the town’s energy costs by $200,000 a year, according to North Providence Mayor Charles Lombardi.

“It’s meant more money to put into services for the town, whether police, department of public works or education. It’s less we will have to go to taxpayers for,” he says.

The project began as the mayor’s office’s idea.

“We convinced the council that this was a deal for the town,” says Lombardi. “We didn’t have to cut down trees. It was a closed landfill with a lot of acreage. This was the best possible use. And we are on the cutting edge.”