Articles from 2012 In January

Bowl Championship Series? What Bowl Championship Series? This month the U.S. Environmental Protection Agency (EPA) announced the winners of its 2011 Game Day Challenge, a competition among U.S. colleges and universities with the goal of lowering waste generated at college football games and increasing participation in and awareness of waste reduction programs. More than 75 schools competed by designing a waste reduction plan for one 2011 regular season home football game. The results were measured and submitted to EPA.

“Reducing, reusing, and recycling moves our nation towards an environmentally and economically greener, sustainable tomorrow,” said Mathy Stanislaus, assistant administrator for EPA’s Office of Solid Waste and Emergency Response, in an EPA press release. “These schools and fans have taken the lead through the Game Day Challenge, and now they are ready and equipped with tools and resources to continue to reduce waste across all campus activities and beyond.”

The winners of the 2011 Game Day Challenge are:

In the final tally, 2.7 million fans at the 78 participating colleges and universities diverted more than 500,000 pounds of waste from football games, prevented nearly 810 metric tons of carbon dioxide emissions equivalent to the annual emissions from 159 passenger vehicles, according to EPA. For a list of participating schools, results broken out by school and details on how the results were measured, visit www.epa.gov/gameday.

In addition to the Game Day Challenge, college students and personnel across the nation were asked to help divert more waste through EPA’s Food Waste Challenge under its Sustainable Materials Management program, which encourages schools to donate surplus and wholesome fresh food from sporting venues and cafeterias instead of throwing it away. According to EPA food is the single largest waste stream (by weight) that ends up in landfills. Out of the 165 million tons of waste that went into landfills in 2010, says the agency, food scraps made up 20 percent.

Details on the Food Recovery Challenge (which is open to any company, organization or institution that handles large amounts of food) can be found at www.epa.gov/foodrecoverychallenge.

The court issued a decision based on the argument that because of the franchise agreements Dallas had with haulers the law violated the contract clause of the U.S. Constitution, says David Biderman, general counsel for the NSWMA, in an interview after the ruling.

He says the judge will schedule an expedited trial on the other claims in the NSWMA lawsuit, and he expects that to take place soon.

Judge Reed O'Connor said that the flow control law "will impact the franchisees' disposal business in a substantial way," with the loss of landfill revenue along with higher transportation costs and tipping fees. He also concluded the city enacted the law to raise revenue.

Based on the evidence, O'Connor said in the opinion that the "plaintiffs are likely to succeed on the merits of their contract clause claim."

“We’re pleased with the outcome, and look forward to the opportunity to present other additional evidence to the judge in the case,” Biderman says.

Dallas City Attorney Tom Perkins said in an e-mail, "The city of Dallas respectfully disagrees with the judge's decision ... The city will study the 33-page order and evaluate its options."

Dallas passed a law Sept. 28 directing city waste to go to the city’s McCommas Bluff landfill. NSWMA and several other parties filed a suit to stop the law, saying it is anti-free enterprise and would discourage recycling.

The proposed ban of plastic carryout bags in Austin, Texas, puts 8,800 jobs in jeopardy, according to the American Progressive Bag Alliance (APBA).

“Plastic retail carryout bags are 100 percent recyclable and made from clean natural gas by American workers. Those in Texas interested in reducing litter and protecting the environment would be far better served supporting a statewide reduce, reuse and recycling program rather than a regressive tax on grocery bags,” the alliance said in a news release. APBA is a group of American plastic bag manufacturers.

The group said that the bags comprise less than 1 percent of the municipal solid waste stream, and a ban makes consumers use reusable bags that a mostly imported from China, made from foreign oil and are not recyclable.

In December Austin proposed a plastic bag ban for area retailers that would begin in 2016 and require a 25-cent fee per bag for the previous three years.

Ford to Reduce Landfill Waste in Europe by 70%

Ford Motor Co. said it plans to reduce landfill waste by 70 percent in Europe by 2016.

Dearborn, Mich.-based Ford said in a news release it will significantly increase the proportion of recycling and reuse of waste to reach that goal. That translates into a reduction in the average landfill waste per vehicle to about 7.25 pounds in 2016 from 11 pounds in 2011.

Ford also pledged to reduce waste usage by 30 percent over the same period.

“This plan represents our pledge to minimize Ford’s impact on the environment both before and after our customers get behind the wheel,” said Stephen Odell, chairman and CEO for Ford of Europe.

Ford of Europe has cut landfill waste generation by 40 percent since 2007 and reduced water use by 37 percent during the same period.

The Heap
brought to you by

The Opposite of Single-Stream Recycling 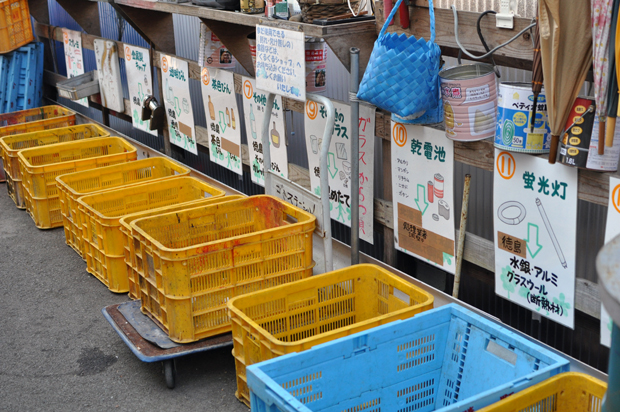 We've reported on Japan's hyper ambitious recycling before. Be it electronics or bras, the Japanese are serious about making sure everything that is used gets reused. It's understandable for an island nation with limited resources but an active consumer base. Perhaps this explains the extreme recycling going on in Kamikatsu, Japan, as reported by Earth911. There residents must navigate not two, not three, but a staggering 34 separate material bins as the village pursues its goal of zero waste by 2020. It may not surprise you to learn that they've already surpassed a 90 percent diversion rate. Click through to read about all of ways in which Kamikatu residents are compelled to separate their waste.

In fairness, we have more bins in the United States than you may realize...They're just not all in one place. Every time you take printer cartridges, rechargeable batteries, compact fluorescent lightbulbs, etc. to a retailer for recycling, or drop off an old TV at an e-waste recycling event, or take unwanted clothes to Goodwill, add those bins to the ones you set out on the curb.

The Heap
brought to you by

For the Love of Lightweighting

The other night I was preparing some rice (basmati, if you must know) for supper when a note on the back of the bag caught my eye. The rice was from Lundberg Family Farms, a brand I've long admired for its sustainable farming practices and, frankly, the tastiness of its product. Up until recently the bags were resealable. The note read, in part:

We've removed the re-closable zipper from our 2 pound bags to save about 15% of the material used to make the bag, which save 35,000 lbs. of plastic from landfills every year. This reduces our environmental footprint and saves precious resources for future generations.

The note went on to suggest alternate ways to keep the rice fresh in lieu of that plastic zipper. This simple notice really got me thinking about all of the ways in which lighweighting is helping to shrink the waste stream. Whether its moving from glass bottles to plastic or concentrating detergent so the package containing it shrinks, manufacturers are finding myriad ways to get their products to market with less packaging -- and should be encouraged to find more.

What are some ways in which you've observed the implementation of lightweighting?

Coca-Cola Co. said in its latest sustainability report that its PlantBottle packaging project saved more than 60,000 barrels of oil and sequestered the equivalent of nearly 30,000 metric tons of carbon dioxide in 2010.

Coke’s PlantBottle replaces the traditional 100-percent polyethylene terephthalate (PET) plastic with a PET that contains up to 30-percent plant based material, Coke said in a news release. The company distributed 2.5 billion PlantBottle packages in 10 major markets in 2010. By the end of 2011 the PlantBottle was available in 20 markets and nearly 10 billion packages had been shipped.

Coke’s eighth sustainability report focuses on four main areas: sustainable packaging, water stewardship, energy efficiency and climate protection. In the most recent report Coke followed the Global Reporting Initiative standards for disclosure and had verification by a third party, resulting in an overall B+ grade.

Coke said it also it improved its water efficiency for the eighth consecutive year and reduced its global carbon emissions by 2 percent.

The wholly owned subsidiary of Primoris Services Corp., Primoris Renewables, will work with Synergy Renewables to begin construction this year and begin operations in the fourth quarter of 2013.

No construction price was given in a news release. Both companies are based in Dallas. Primoris said it expects the facilities to generate revenue for the company of about $40 million.

The partnership, along with Dynamis Energy LLC, based in Boise, Idaho, plans to build waste-to-energy projects worldwide.

The two facilities in Puerto Rico will use a proprietary process to gasify approximately 180,000 tons of municipal solid waste annually to generate 10 megawatts of energy at each site. The facilities will be developed along with Sunbeam Synergy LLC, which is owned in part by Dynamis and Synergy.

The Big Island of Hawaii has adopted a ban on plastic checkout bags, following the lead of two other Hawaiian islands.

The Hawaiian island ordinance will take effect January 18, 2013, and affects only bags sold at the counter, says Hunter Bishop, deputy director for the Hawaii County Department of Environmental Management, in an interview.

It comes after bans on plastic checkout bags took effect Jan. 11 on Maui and Kauai islands and counties. Those Hawaiian counties encompass the islands.

On Hawaii Island, businesses can make plastic checkout bags available for purchase for one calendar year after the law takes effect. It would be up to the individual retailer whether to charge a fee and how much, Bishop says.

The department will have six months to develop specific guidelines for the ban after it takes effect, he says.

“The purpose of this article is to reduce the use of plastic bags and to encourage the use of environmentally preferable alternatives, such as reusable bags,” according to the bill.

Both laws in Maui and Kauai allow retailers to provide recycled-content paper or reusable bags.

Fort Wayne, Ind., hopes to reach a recycling participation rate of 80 percent this year after averaging 70 percent of city households in 2011.

Mayor Tom Henry said since the city’s One Cart recycling program began in January 2011, the city has been able to save nearly $150,000 in fees by reducing the amount of landfill waste. And through a shared revenue agreement Fort Wayne received more than $425,000 for its recyclables, the city said in a news release.

Henry is asking residents who are currently not recycling to call 311 to register for a cart to be delivered to their home.

The city introduced the One Cart recycling program to provide residents with a more cost-efficient waste collection method and to improve the environment by reducing the amount of waste sent to the landfill.

Fort Wayne reduced its landfill waste from an average of 98,00 tons before 2011 to 88,953 tons last year. The participation rate increased to 70 percent from 39 percent before than program started.

As a result of the savings the city reduced the monthly waste fee for single-family homes to $9.95 from $11.24.