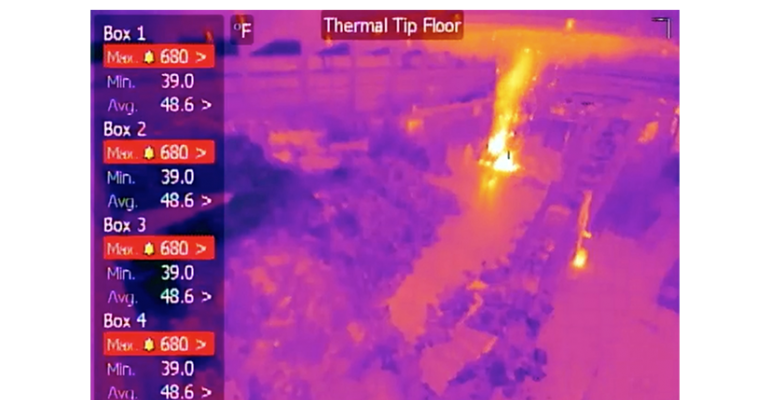 Though fire incidents began to level off during the end of 2018, total reported incidents are still up 26 percent for the year compared to 2017.

During 2018, the waste and recycling industry experienced 365 reported fires in both the U.S. and Canada. Based on reasonable assumptions, we can extrapolate that 1,800-plus facility ﬁres have occurred during that time, which based on the number of facilities reported by the Environmental Research & Education Foundation, is more than 40 percent of the industry.

There were also three deaths and 13 injuries reported during that time. Most of these injuries were suffered by the brave fire professionals called in to fight and contain these incidents. 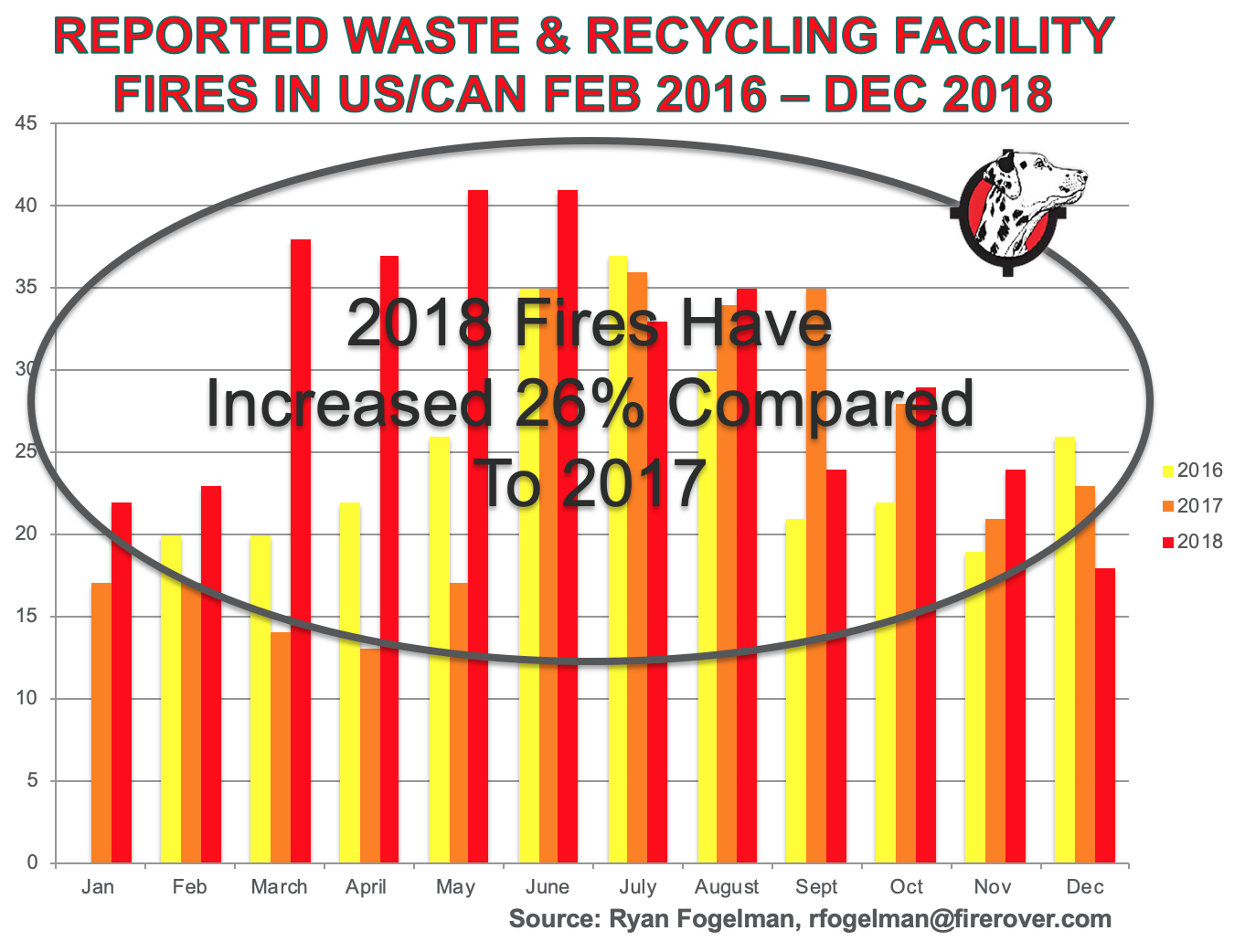 Waste and recycling facility fires started to level off during the back half of the year from their sharp increase the first six months of the year, but total reported fire incidents are still up 26 percent for the year when compared to 2017.

We ended the year on a positive note. For the month of December, we experienced 18 fires as compared with 23 in 2017 and 26 in 2016. We typically see an increase of fires during December based on the increase in municipal solid waste volume due to the holiday shopping season. However, we have incurred five waste fire incidents since Christmas day.

These fires are not only occurring at our materials recovery facilities (MRFs) and transfer stations but also at our scrap metal, construction and demolition, paper, plastic, chemical and organics recycling operations. They are caused by a list of fire hazards, including, but not limited to, lithium-ion batteries, pressurized tanks/containers, fuels, fertilizers, propone tanks, aerosols and more. Most fires are caught during their very early stages, but the fires reported by news outlets have typically passed the incipient stages. Most of these incidents incurred significant damage and downtime and are required to be fought by our local firefighting professionals.

When I first met David Biderman, the executive director and CEO of the Solid Waste Association of North America (SWANA), in 2015, he was focused on driving safety initiatives throughout his organization. From our initial discussion to today, Biderman has been trying to help promote awareness to the fire issues facing our waste and recycling facilities.

Specifically, he notes, “SWANA is concerned about the increase in fires reported at landfills, waste-to-energy and recycling facilities over the past few years and believes the increased use and improper disposal of lithium-ion batteries is a significant contributor. We have incorporated fire prevention into our safety education programs and are urging that batteries be highlighted in communications to homeowners about what materials should not be placed in their curbside recycling. Looking ahead to 2019, I anticipate efforts will be made to make battery manufacturers responsible for the proper management of lithium-ion batteries when they reach the end of their useful life.”

As 2019 opens its door, now is the time to take a hard look at the prior year’s data in order to see potential trends by industry vertical, states, timeframes and volume of material processed. One particular trend we are experiencing is the increase in metal recycling fires at our scrap metal facilities. In 2018, metal fires overtook waste as the number one cause of facility fires. We need to keep in mind that the number of fires as a whole has increased 26 percent, and waste fires have remained steady, but metal fires have almost doubled from 72 incidents in 2016 to 145 in 2018. 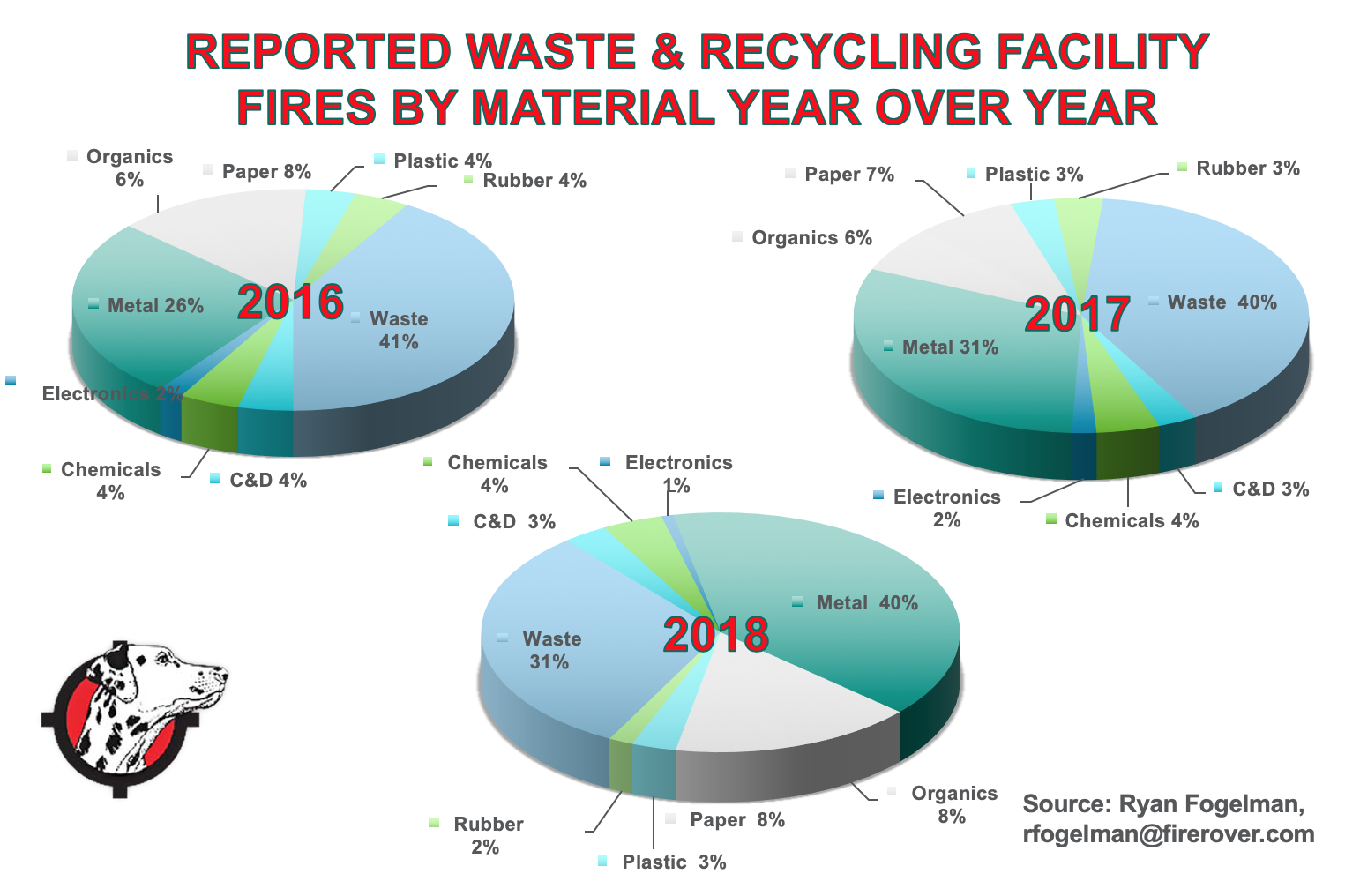 Keep a look out for these results and further analysis in the “2018 Waste & Recycling Facility Fire Annual Report” coming out later this month.