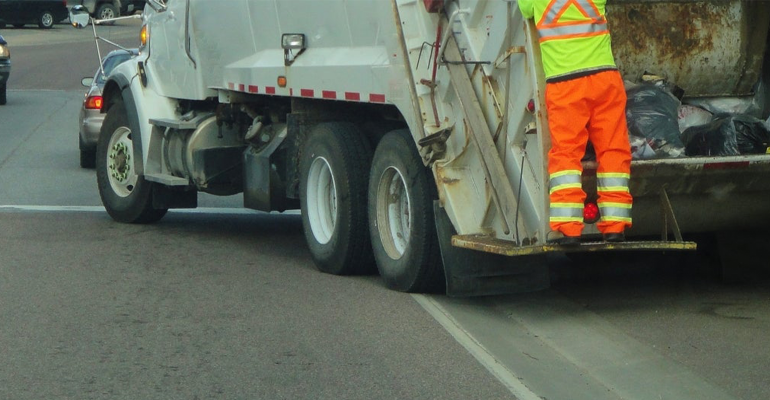 For the first time in years, refuse and recyclable material collectors dropped from the top five deadliest occupations.

The Bureau of Labor Statistics (BLS) published its annual report of 2019 National Census of Fatal Occupational Injuries data. Waste and recycling collection fell behind helpers and construction trades in the number of fatalities to land at the sixth deadliest. A lower number of fatalities in collection combined with a rise in deaths in the construction trades contributed to this ranking.

“We're an industry that has about 50 fatal incidents where a year where a worker gets killed, and most of those are in collection. A small portion of them are either at landfills or transfer stations,” says SWANA CEO David Biderman. “ 2018 was very much an outlier year where we saw this dramatic increase in the number of worker fatalities involved in solid waste collection. And for 2019, our data suggested that there had been a decline in fatalities, but it was still at levels that are both higher than historical averages and also unacceptable.” 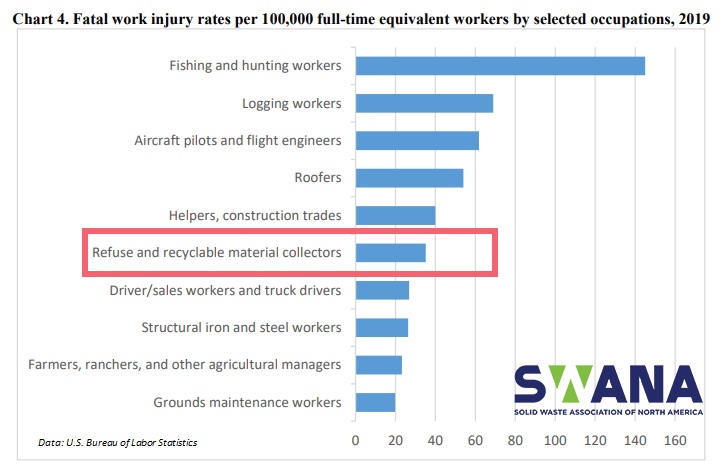 Fatalities at material recovery facilities (MRFs), NAICS 562920, remained unchanged year-over-year with a total of 3. Data for solid waste landfills, NAICS 562212 indicates no fatalities in 2019. In contrast, SWANA’s 2019 fatality report recorded 11 fatalities occurring at landfills, including “several incidents involving landfill workers and contract employees.” The organization states that it intends to reach out to BLS for additional clarification in the landfill category.

While industry sources indicated the 2018 BLS data breaks down the number of fatalities by private hauler, government, employee and self-employed, 2019’s numbers encompass all sectors of the industry – government, private and local.

“Looking at the 2018 numbers, it breaks it down,” says Kirk Sander, vice president of Safety and Standards, NWRA. “And so to do that, we needed to compare apples to apples on what’s happening. What were the types of fatalities? Are they private? Are they public? A decreasing rate is always good. But in order to have actionable steps, we really need to know what these are.”

In a request for comment about the latest fatality stats, Henry Reeve, BLS economist explains that “An estimate may be suppressed if it doesn’t meet certain requirements for both reliability and confidentiality.”

He adds, “We’ve updated our criteria for confidentiality due to concerns about secondary disclosure and this has affected a large number of estimates.”

Transportation incidents comprised 60% of the fatalities recorded for the solid waste and remediation industry in 2019. Motor vehicle-related deaths have historically been a cause for concern in the industry, and as 2020 comes to a close, the pandemic’s effects could shift the numbers.

The National Safety Council (NSC) has reported a steady rise in road fatalities despite the number of hours traveled decreasing because of stay-at-home orders and economic closures.

“Despite the fact that the rate of death has not changed from 2017, this is the highest number of workplace deaths since 2007,” the NSC states. “Even more alarming is that these are pre-pandemic figures: 2020 data could be far bleaker given COVID-19’s impact on workplace safety.”