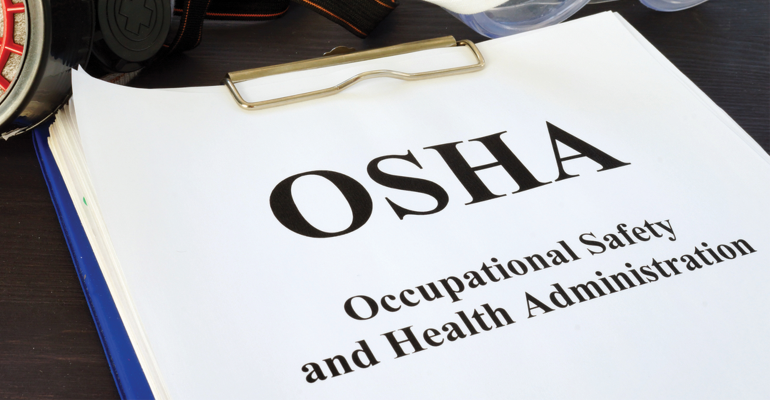 With a new administration in place and changing guidance reflecting the ongoing COVID-19 pandemic, the Occupational Safety and Health Administration (OSHA) is expanding enforcement efforts.

The agency reported that in Fiscal Year 2020 (Oct. 1, 2019, through Sept. 30, 2020), 21,674 inspections were completed in response to "worker complaints, injuries and fatalities, and referrals impacted by the coronavirus." OSHA investigated all 9,189 COVID-19-related complaints.

OSHA released the details of its COVID-19 National Emphasis Program on March 12, 2021. While no emergency temporary standard (ETS) has been issued to date, it would be expected to mirror the directive.

"I think we're entering an era of more from OSHA more aggressive enforcement - a return to some of the Obama administration era - policies and procedures for handling OSHA inspections that we really kind of saw fall away a little bit over the last four years," said Liz Ash, senior legal counsel for CVS Health, during the Virtual National Safety Congress & Expo. "But all of that said, even in the face of more attention from OSHA,  the fundamentals still remain the same. They've not changed just in when you see more attention from OSHA. I think it's exceptionally important for employers to understand what our legal rights are when faced with an OSHA inspection, just like you would expect from any other law enforcement agency."

Ash led attendees through a series of best practices and procedures they can follow during an inspection. The first concept she touched on was probable cause.

OSHA will arrive on a job site for a reason - whether it's a response to a compliant or a notification of an injury from an employer. The agency also has national emphasis programs and random approaches to doing inspections "based on programmatic priorities for the agency."

On the topic of the obligation of an employer to notify OSHA in the event of a serious injury, the agency will do one of two things depending on the severity of the injurty: send a rapid response injury form or perform an on-site inspection. This process and the response never changes, no matter who is at the helm of the agency at that particular time.

"But that's not necessarily determinative," Ash indicated. "They're really getting at whether there's an underlying hazard in the working environment that's not controlled, and that led to the injury in this particular case. And sometimes that will warrant an on-site inspection."

When a letter is received, wther its informal or a rapid response investigation, the first step for an employer is to "undertake a thorough and impartial investigation of the allegations in whatever the document is either the complaint or the underlying kind of root cause of the injury itself." Employers must engage legal council because any documentation generated as a result of an inspection or an injury can be used for litigation.

"For purposes of establishing that relationship between your client and your bureau attorney, those kind of nuances become very important," she explained. "Any documentation that you're creating to respond to an inquiry written in green needs to be done under privilege." Documentation includes any photos taken, interviews conducted and any materials that will be based to OSHA.

Corrective action must be taken immediately if an employer discovers the problem that led to the complaint, whether its accurate about the facility or the condition in the workplace that caused the injury.

"There's an evidentiary principle here that says subsequent remedial action can't be used as evidence that there was fault in the first place," Ash said. "So in other words, just because you change something on the back end  is not an admission that you did something wrong on the front end."

An opportunity to take corrective action in real time will demonstrate that the employer's response to the complaint is done with the intention of improving working conditions.

She added that "when it comes to actually communicating back to the agency, you need to be transparent, but careful in how you read up for the response, which means you avoid legal admissions of violation. You don't say, 'we violated section 1200, we violated a hacker hazard communication standard, or something of that nature.That should demonstrate that you took a very close look at yourself, and made corrective action as needed. And you can say, 'we didn't find an issue here. But we took this step to avoid issues in the future.'"

Because at the end of the day, more isn't always better, she concluded. A response must be tailored to address the concerns of OSHA, and an employer must be selective in the documents provided.

Ash continued the conversation with best practices during on-site inspections.

All OSHA inspections begin with an opening conference followed by a walk-around inspection and requests to review key documentation. Interviews may involve both management and non-management employees. Once all of the necessary information is gathered, the agency will initiate a closing conference.

The length of an inspection may last one day, or a final closing conference could happen weeks or months later.

An opening conference is an opportunity to show agency inspectors that "you have a handle on what you're doing." At this point, safety and legal partners should be notified of the impending inspection.

"My best practice is take the inspector to a conference from a neutral error area, if you have the facility and take a reasonable amount of time, 10, 15, 20 minutes to get in touch with your legal adviser and or your safety professional that's closest to that facility," Ash said.

If safety and legal are available to be present during the opening conference, it is an employer's right to have them at the meeting. The opening conference will reveal the manage and scope of the inspection. Referring back to the concept of probable cause, Ash said that the agency doesn't have the authority to go to every corner of a facility to look for violations except in "very narrow circumstances." Inspectors are only allowed to search parts related to the scope of the complaint, which determines the scope of the probable cause.

"If they show up and they say we've got a complaint that there's a rodent infestation in your breakroom, then the scope of their inspection is limited to the break room," Ash said. "The exception to that is that anything that's in plain view, along that route into your from the front door into the break room is fair game. So it's, it's anything in plain view can be subject to citation in certain circumstances. It's important to kind of set expectations with the inspector during that opening conference about what portions of the facility are subject to the inspection."

During the inspection, the employer should have someone accompanying the agency representative at all times. When the inspector takes a photo, that person can take an identical side-by-side photo so all parties have identical records.

Once the inspection is completed, the next step is a record request. Ash explained that, "any program or document that's required by an OSHA standard to be kept is fair game during an inspection if it's within the scope of the inspection."

The only time sensitive documents are OSHA 300 logs, which need to be provided within four hours of the request. Ash's best practice for document sharing involves making a list of the paperwork OSHA wants, telling the agency that you will gather the document and communicating a set date at which the agency will receive them. This approach keeps everyone on the same page.

"Again, your job as an advocate for your employer. During an inspection, any kind of government inspection, whether it's OSHA or someone else, is to show that you've got a handle and you know what you're doing, because as soon as anyone sees that there's a crack in the armor or an opportunity to say, 'come on guys, this is such an obvious miss' suggests to them that there are other things they need to look at. There are other things lurking behind the corner that say if [the employer] misses this, then odds are they're going to miss 14 other things that we're going to want to take a look at," Ash said.

An employer's job is to control the narrative while being cooperative and responsive. While OSHA may be entitled to documentation, there are limitations that may need to be enforced.

She added, "the vast majority of OSHA inspectors across the country are exceptionally professional people. They care about people working in our workplaces. And if everybody kind of aligns on that objective, and that philosophy, then things tend to go a lot smoother."

When OSHA inspectors begin the interview process, it's important to request these interviews to take place at a certain time in order to not disrupt business operations. This could mean scheduling sessions a day or two in advance.

Legal counsel should be present during all interview because statements from managers, in contrast to hourly employees,  can be taken as the knowledge of the company as a whole and not that individual worker's perception.

"It's really important to understand that difference and make sure that you've got the right controls around manager interviews." she stressed. "You need to develop policies around the ability of managers to sign statements. In our case, we say don't sign statements, you can take a more fluid approach. There's no hard and fast rule either way, but it's good to set that expectation."

Employees should be told they are expected to be cooperative and tell the truth during interviews, as they will not be penalized in any way for speaking with an OSHA inspector.

"If people are obtrusive or uncooperative, it just sets the wrong tone, and it's just so much harder to manage on the back end if something does go awry," Ash said. "It's important to have those kind of concrete principles outlined and to make people understand that this is a part of business, it's something that we have to deal with, we get that it's unpleasant. But all you have to do is tell the truth, and nothing bad's gonna happen. And if you set that tone as an employer, it really helps people kind of feel at ease in in a really unfamiliar situation."

Every touch point with an OSHA inspector is an opportunity to "demonstrate your sophistication as an enterprise and employers, she said. If the inspection is approached in this matter, it creates the opportunity to align your goals and objectives with the agency and can avoid an adversarial scenario.

Ash explained, "when you take the  perspective that 'listen, we get that we have good programs, we get that we're not perfect and we're willing to hold them mirror and do more,' then it's really hard for an OSHA agency to take issue with what you're doing."

While this doesn't avoid citations, an inspection should never been made to feel negative.

She said, "when I approach an OSHA inspection, it is always from that standpoint of professionalism. We care about our employees. We want to do the right thing. We think we got it right, but help us understand if there's something more that we need to do. Have that attitude. Approach things from a position of curiosity as opposed to judgment, or having that growth mindset, or whatever corporate aphorisms I can throw your way. It applies to OSHA inspections, too."

Ash concluded, "stand behind your programs, but be willing to do more."

Editor's Note: This two-part series explores workplace safety trends in 2021. Part one explains the structure of workplace standards and oversight across the United States. Part two, as told from an employer's perspective, discusses how to prepare for an OSHA inspection.