Sanitation worker loses a leg but finds his mission.

Even if you’re relentlessly careful, an accident can change your life in an instant. In less time than it takes to empty a Dumpster, Rick Ottinger of the city of Clearwater, Florida’s solid waste collection team went from whole to disabled. Yet, he refuses to let his disability dominate his life.

In the 15 months since his accident, Ottinger has become Clearwater’s biggest safety advocate. He’s tireless in his efforts to both overcome his challenge and save others from a similar fate. 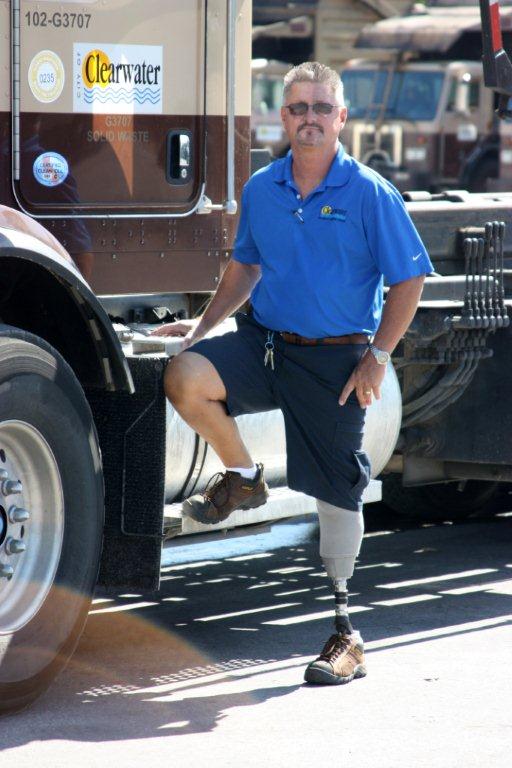 During most of his 23-year career in the sanitation field, Ottinger worked as a swing driver. Familiar with a wide range of industrial vehicles, he worked as a Jack-of-all-trades. “Wherever they needed me was where I went,” says Ottinger.

On the day of the accident, Ottinger was asked to fill in as a backup man on a commercial route. He had driven that very route several times, so he was familiar with that area of town, along with the configuration of the parking lot of the Cypress Point Plaza. He knew that once in the lot, the front-end loader had to make a series of tight turns to get in position in front of the dumpster.

But on that day there was an added complication. As the team successfully navigated the curves, they found a truck blocking the entrance to the dumpster enclosure. Ottinger says he told the driver, “’Stop in the middle of the parking lot. I’ll go out and get the truck moved.’” The driver acknowledged Ottinger’s intention, then stopped the truck.

Ottinger hopped out of the truck and instantly found himself on the ground. He looked up, only to see that the 56,000-pound truck’s tire was on his left leg. The driver had apparently let off the brake pedal just enough that the truck shifted, pinning him beneath the tire. He yelled out for the driver to go forward. As soon as the truck rolled off his ankle, Ottinger dragged himself out of the truck’s path to avoid being hit by the other wheels. His first impression of the injury was that the truck “got me pretty good.”

After pulling the truck off Ottinger’s leg, the driver used the radio to report the accident and came around to check on his backup man. One passerby called 911 while another notified Ottinger’s wife at work.

Within seven minutes the fire department arrived and began preparing to move Ottinger to the hospital. He recalls that moment vividly. “I was conscious the whole time. It didn’t hurt. They asked if I needed pain medication. I was worried about my job.”

Medical personnel cut Ottinger’s boot off and asked him to wiggle his toes. Try as he might, he couldn’t move his foot at all. Soon he was on a gurney inside the helicopter, being rushed to the Bayfront Medical Center. 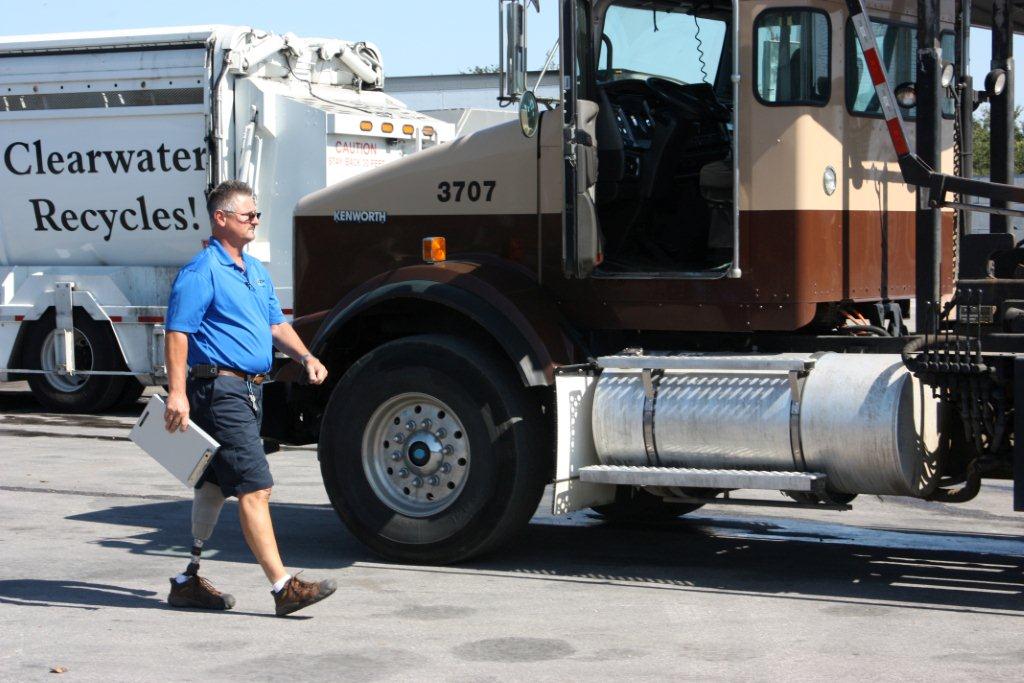 After multiple MRIs to assess the damage, the doctor gave Ottinger the honest truth: trying to save his foot would require six or seven surgeries, the rehabilitation process would be extremely painful and there were no guarantees that he would ever regain the use of his foot. In addition to the injuries to his foot, he had lost the skin all the way down his shin and much of his calf musculature.

With the odds stacked against him and the prognosis grim, Ottinger had a decision to make. And he said it was not a hard choice. “I said, ‘Take the foot. I’m glad I’m alive.’“

The doctors amputated his foot and took muscle tissue from eight separate muscle groups to reconstruct his calf. They used skin from three places on his upper legs to graft over the injury. Ten days and 260 stitches later, the doctors checked the wound to see if the skin grafts and muscle relocations were successful. They found signs that his body was accepting the tissues, and released him to his wife’s care at home.

That’s when Ottinger’s work really started. With his wife’s help, he relearned simple skills that most of us take for granted. Showering, dressing and getting in and out of his new wheelchair were time-consuming and challenging. Besides caring for his amputated limb, he had to make sure the skin graft areas on his thighs healed.

Ottinger knew that most amputees take between two and five years to master a prosthetic. He said, “’I just turned 50 years old. I don’t have that time.’

“I got my first test-fit socket and was walking within 30 seconds. They were a little shocked. They didn’t think I would be walking that day. I said, ‘I’ve been in a wheelchair for three months. I’m walking today.’“

After another month getting accustomed to the prosthetic, Ottinger shocked everyone around him by returning to work a full five months ahead of the experts’ projections. When asked to explain what made him beat the odds, Ottinger said, “You gotta get back on the horse that bit you. First thing I did was drive the truck that took my foot. Did it change my life? Yes. But losing a foot isn’t going to slow me down for what I need to do as a husband, as a parent and for going to work. That’s my drive. I thank God I’ve been blessed with support from family and friends and the city of Clearwater.” 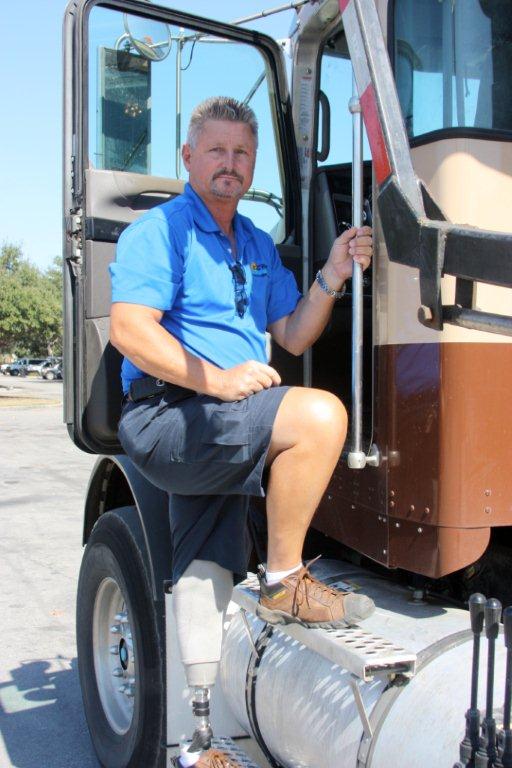 John Pittman, the city’s assistant director of solid waste, has nothing but praise for Ottinger. “Rick is a unique guy. He never once thought about throwing the towel in. The day after the accident happened, I went to visit him in the hospital and the first thing out of his mouth was, ‘What’s the status of my job?’ I said, ‘Your job is fine. Just get healed.’ He worked so hard to get back to work. He’s constantly pushing himself.”

But even with his indomitable spirit, recovery hasn’t been easy. He lives with phantom pain and constant blisters where his leg bone chafes against the prosthetic. Getting ready for his early-morning shift takes him more than twice as long as it used to. He’s aware that others in his situation might have sued the city and retired off a settlement, while he still has a decade of working ahead of him. But he has found a mission that keeps him going.

Fifteen months after the accident, Ottinger is the city’s most vocal proponent of safety. Promoted to the management track just prior to the accident, he now works as one of two supervisors over the city’s commercial division, with special responsibilities relating to safety awareness. He reminds drivers and other employees that complacency is the biggest cause of accidents.

Ottinger delivers presentations on safety at city and department staff meetings, offering vital reminders to others in the industry. He tells staff that the equipment they use every day can be a weapon. One moment of inattention or carelessness, and a driver can cause deadly harm to a person they don’t even know — or, as in Ottinger’s case, someone they do know.

But he’s not one to hold a grudge. Ottinger works with the driver who caused the accident every day—even training him on new equipment at one point. His philosophy is simple: “He’s got to deal with his mental mistake the rest of his life. I treat him like he’s any other driver.”

The accident that crushed Rick Ottinger’s foot was not enough to crush his spirit. He said, “I haven’t lost a day of work because of my leg since I’ve been back. Don’t treat me like I’m handicapped — I’m not. I still drive better than most people. I just drove in a garbage truck rodeo. I placed third.”

Monelle Smith serves as content director at Gemstone Media. She produces business and creative content for a range of industries.