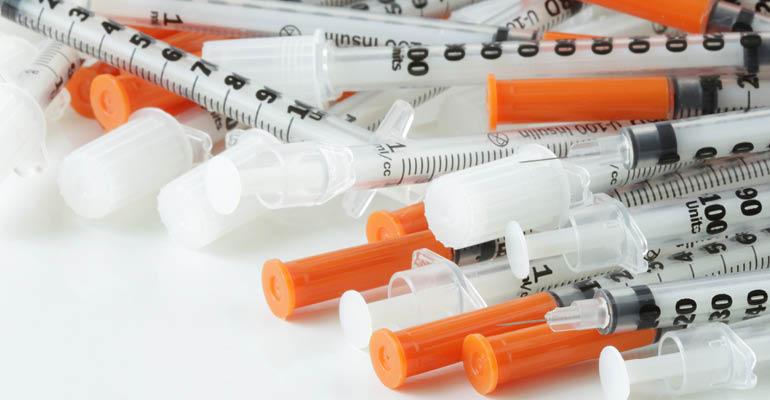 The joint study between EREF and SWANA surveyed MRFs to estimate injury risk due to improperly disposed household needles.

An estimated 7.8 billion injections occur each year outside of healthcare facilities, and a portion of these needles and sharps end up at recycling facilities where they may be encountered by workers and result in injuries. The recent passing of a statewide needle take-back program in California highlights that household needle and sharps disposal is an issue. This is compounded by the effects of international policy actions such as the National Sword, where a 0.5 percent contamination rate has been imposed on many recyclable materials that are being shipped from the U.S. to China. In an effort to meet these more stringent requirements, some materials recovery facilities (MRFs) have increased the number of pickers on sorting lines, which may increase the potential for needlesticks.

The Environmental Research & Education Foundation (EREF), in collaboration with the Solid Waste Association of North America (SWANA), recently completed a study of needlestick injuries (NSIs) at municipal solid waste (MSW) recycling facilities. Survey results suggest needles are routinely observed as contaminants in the recycling stream. Ninety-seven percent of MRFs participating in the study reported seeing needles or syringes at least one time per year. Over half reported seeing them daily or a few times per week. Similar rates were reported by MRFs that do and do not accept commercial recycling from healthcare sources, indicating improper sharps management at healthcare facilities is not the primary cause of needles at MRFs. 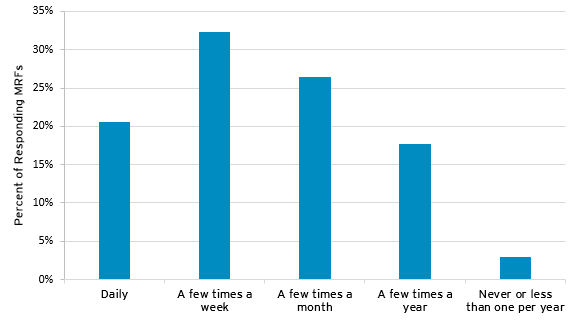 Once on the line, needles can result in NSIs and potential exposure to bloodborne illnesses. Over half of MRFs reported that one or more NSI occurred in 2016, which equates to an injury rate of 2.7 NSIs per 100 full-time equivalent workers. Nearly all reported injuries (98 percent) happened to picking line workers, who have an elevated risk of a NSI due to their direct contact with improperly disposed sharps when manually moving or sorting materials along the conveyor. Based on these findings, it is estimated that between 781 and 1,484 NSIs may occur each year at U.S. MRFs. These injuries to MRF personnel could result in up to $2.25 million in direct costs for medical care.

How do needles end up in household waste and recycling streams? Across the U.S., needle disposal is a patchwork of differing disposal guidelines and program access levels. In all states, residents are instructed to place used household needles in a rigid container for storage and disposal. If a specialized sharps container in not available, residents may use a variety of traditionally recyclable containers such as laundry detergent or milk bottles.

Across much of the U.S., policies and guidelines instruct residents to place sharps containers in the portion of their household garbage destined for landfill. However, these containers also end up in recycling bins. Four states ban sharps containers from the MSW stream altogether: California, Massachusetts, Oregon and Wisconsin. An additional 11 states allow the practice but specify it as a last resort.

Alternative collection and take-back pathways in the U.S. include: drop-off sites and events, mail-in service, syringe exchange programs and special waste pickup service. Drop-off is the most commonly available option, with more than 3,700 programs and events held in 43 states. Syringe exchange programs are available in 42 states. The majority of these programs use private sanitation contracts to properly dispose of sharps, thereby reducing risk to MSW collection and picking line workers.

There is growing concern that that needles in the MSW stream, and the resulting NSIs, are on the rise. Factors such as an aging U.S. population, an increase in home-health services, the growing opioid epidemic and confusion or lack of access to proper home sharps disposal could all contribute to a growing risk. More information on household needle policies, safety controls and MRF injury rates can be found by downloading the full report, “Household Needles in Municipal Solid Waste (MSW): Policy, Controls and Material Recovery Facility (MRF) Safety.”