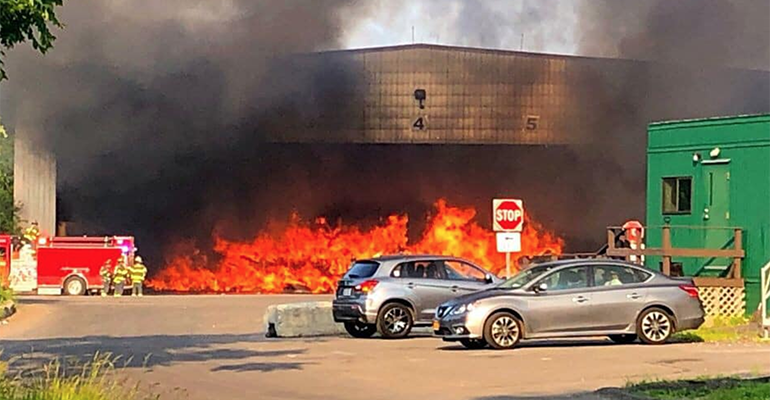 With all the focus the industry has put into fire prevention efforts, why are fire incidents still increasing?

With all things being equal, I am proud of the waste and recycling industry. The industry’s attitude toward fire is night and day compared to when I first started down this path in 2015.

Back then, “fire” was a dirty word not to be mentioned outside of the four walls of any waste and recycling business. If there was a fire, fingers pointed to the operations and safety organizations to fix the operational breakdown that must have occurred.

Fast forward to present day, waste and recycling companies have embraced fire prevention. Most organizations have some sort of plan in place or, at the very minimum, have begun to address the issue through planning, training, public education and investment in technology. So that begs the question:

In September, we saw 36 reported waste and recycling facilities fires that occurred within the U.S. and Canada. September’s number being so high is only one of the issues we face. The real issue is that we have had a monthly high now for July, August and September. The industry has experienced a summer increase in fire incidents for decades. These fires traditionally are caused by the public’s enjoyment of their summer. Hazards from propane tanks, to charcoal, to fertilizers end up on our tip floors that result in close calls to complete destruction of our waste and recycling operations. 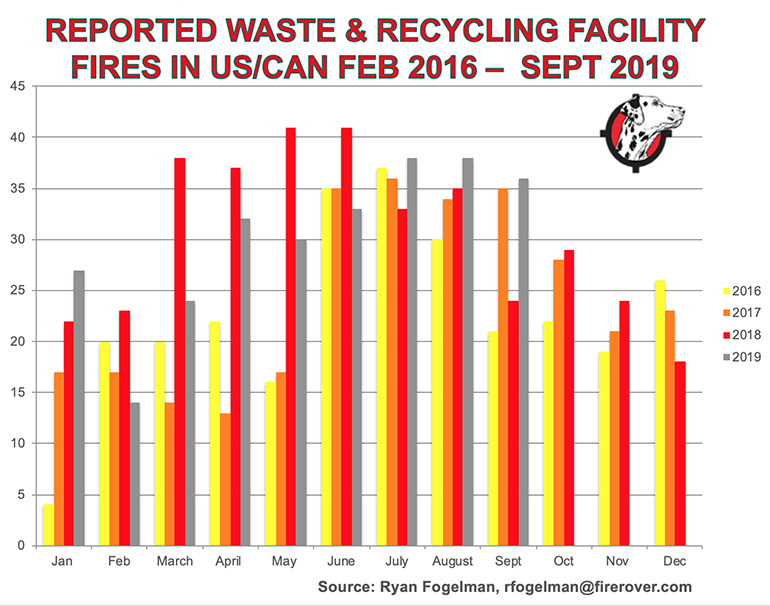 September’s high numbers could very well be due to the hot and dry summer that has prolonged well into September in many parts of the country. Unfortunately, we cannot rule out the new hazards from lithium-ion batteries that continue to flood our waste stream.

During the past 12 months, the waste and recycling industry has experienced 342 reported facility fires in both the U.S. and Canada. Based on reasonable assumptions, we can extrapolate that 1,800-plus facility ﬁres have occurred during that time, which, based on the number of facilities reported by the Environmental Research & Education Foundation, is more than 40 percent of the Industry.

I define “reported facility fires” as any fire that has been reported by the media that occurs at a waste or recycling facility. Typically, those fires are the two-alarm fires that required fire professionals to arrive on scene.

At WasteExpo in 2016, I presented a simple strategy for decreasing the number of fires that our waste and recycling industry face each year. This included a number of different fire safety initiatives, which, in combination with our early detection and remote suppressant solutions, would result in “saves” in materials recovery facilities, transfer stations, construction and demolition (C&D) facilities and metal recycling facilities.

I made the assumption that if we have “saves,” the number of reported fires will eventually start going down. I have updated the data in the graph below with actual and updated estimates. But the issue that I underestimated was the sheer number of hazards we face as an industry primarily due to the continued onslaught of lithium-ion batteries in our waste stream. 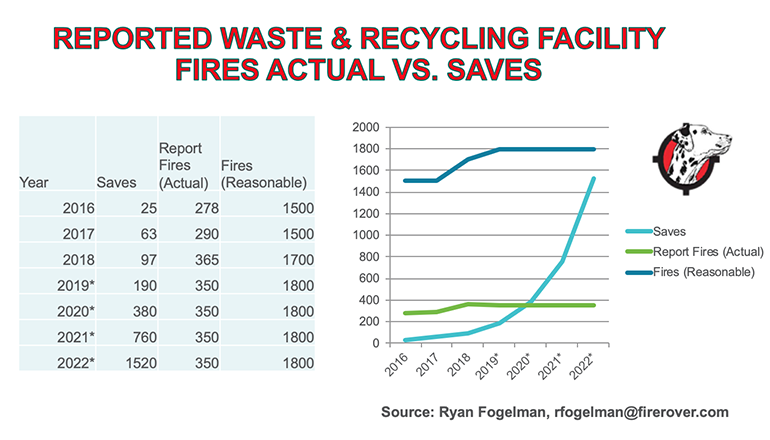 According to an article penned by Matt Bohlsen that was published last month in Seeking Alpha, “No matter which way you look at it, lithium-ion ("Li-ion") battery demand is set to surge about tenfold between 2018 and 2030 (see BNEF chart below)." Another way to get a feel is the Benchmark Minerals megafactory data, which as of a July 5 Tweet: "Assessment published at 1,956.6GWh [gigawatt hours] capacity by 2028, increase of 5.25%, now tracking 91 plants." The 91 number was three back in Q1 2015, showing how much megafactory demand has advanced in just four years. (Source: BloombergNEF) 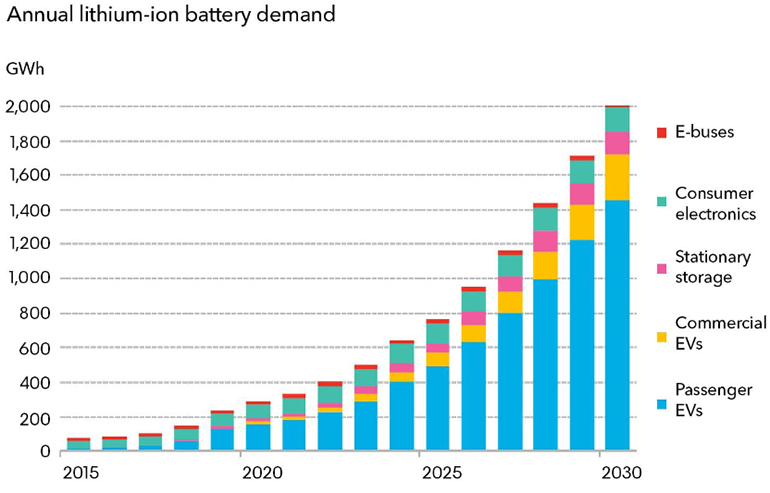 As you can see from the graph above, the amount of power consumers and businesses that need to meet their growing appetite for lithium-ion batteries is staggering. I am not sure we even comprehend what is coming down the pike. The good news is that a significant increase in the need for lithium power is coming from automotive uses, which is the supply chain where I see the most work being focused on developing a closed loop supply chain allowing for fire protection and tracking during the entire product lifecycle.

One of my counter parts, Ronald Butler, is working on just this type of solution for the automotive OEMs, which I highlighted in my May article published in Waste360.

Most of the issues that the waste and recycling industry faces is in consumer electronics and stationary storage. These are the products that end up in our recycling bins, on our tip floors, in our C&D material and on our shredders.

Last week, I was fortunate to be part of a Lithium-Ion Battery workshop that was put on by the Solid Waste Association of North America Illinois Chapter for its fall event. I wanted to share some insight that I gained from the other presenters around the issues we are facing as an industry. My presentation focused on national trends and future trajectories of lithium-ion batteries, which I have uploaded below if you are interested in viewing:

The first speaker was Jeff Spangenberger of Argonne National Laboratories, who works in materials recycling research and development. He made the point that although we are testing a number of different types of materials in an effort to replace the dangers of lithium-ion batteries, lithium is currently our best option. I know that I am constantly barraged by headlines from the major news outlets that claim there is a safer, more powerful portable energy storage option coming to the market. Spangenberger made clear that most of the testing is coming from small samples sizes. And although promising, they might not be all that the headlines are making them out to be. Although I believe that eventually a better option will be developed and commercialized, the fact is that we are going to be dealing with lithium-ion batteries for a long time into the future.

The second presentation was led by John Sliwicki, vice president of risk management for Lakeshore Recycling Systems. His presentation highlighted his experience dealing with a large fire at one his facilities in 2018 that required more than 1.5 million gallons of water to contain and completely suppress the fire hazard. Since the fire, his organization had made a number of changes outlined in a disaster preparedness plan that include more employee training, working with the local fire department, grading loads, clearing its tip floor and adding early detection and suppression capabilities.

I would personally like to stress that executives like Sliwicki and a number of others in the industry, including Steve Sargent from Rumpke Waste & Recycling, Brent Shows from Advanced Disposal Services, Michael Gross from Zanker Recycling, Michael DeCastro from Covanta, Rafael Reveles from Apple (formerly Sims Recycling Solutions) and David DeVito from ReEnergy Holdings, have all been on the forefront in both fire preparedness through proper planning, public education and sharing of best practices. I highlighted DeVito’s harrowing experience successfully fighting a major C&D fire incident in last October’s article. These executives that are willing to share their experiences and learnings for the rest of their industry colleagues and the public to learn from is the spirit of what safety is all about.

Finally, John Schumacher from Assurance shared the insurers’ perspective on handling the fire risks in the market. We have all witnessed insurance companies' hesitation to insure the risks in the industry. Schumacher made the point that insurers are requiring higher deductibles/premiums and increasingly only willing to insure layers of the risk. This is different from the days where one insurer would insure an entire property. Schumacher was clear that the best way to get on any of the insurers' good side is to put the programs, policies and investments in place that will lower the risk profile of your operation.

From my experience, insurers do not want to stop writing policies in this industry. They are doing all that they can to make sense of the risks and the incidents they are experiencing. As the industry develops a better understanding of the strategies and investments needed to keep facilities safe from fire incidents, the insurers will be more likely to underwrite the collective risk.

I have one of the best jobs and one of the worst jobs that a person can have. I have spent the past five years engulfed in an industry that we cannot do without (waste) or should not do without (recycling). We are in the heart of an epidemic that is causing havoc in our operations. From my perspective, we have made it through the hardest part, which was getting our arms around the initial and continued scope of the problem. The problem is not going away, but the industry has been stepping up by working together, educating, executing and investing in strategies and solutions that are mitigating both the traditional fire risks as well as the onslaught of fire risk we are experiencing through lithium-ion batteries.

We need to keep up the fight. The day will come where the number of fire incidents in our facilities, especially the major fire incidents, will catch up to the danger, and we will see these reported numbers steadily decreasing. For those of you out there who are contributing to the solution through your company, organization or yourself, I appreciate your continued efforts.