Is Sanitization Nation Responsible for the Post-Pandemic Surge in Facility Fires? 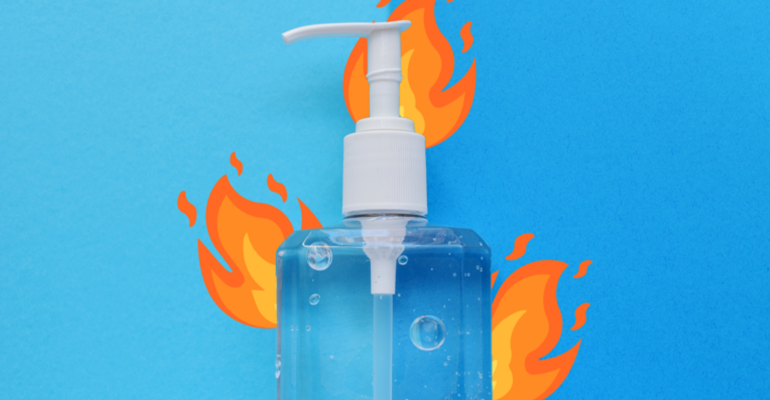 The July Fire Report recaps the continuing cover of fire incidents at waste and recycling facilities in June 2021.

The good news is we didn’t have the worst month for fires ever, but the bad news is this June ranked second to June 2018 with regard to fire incidents at our waste and recycling facilities. The same is true when we look at the past 120 days. The 156 fires incidents we experienced were only one short of the same period in 2018, which was the year of the “lithium-ion battery fire spike.”

In June of this year, we encountered 36 reported fire incidents at our waste and recycling facilities in the U.S. and Canada. To put this into perspective, in March through June of last year, we only faced 105 total fires compared to this year’s same period of 156. This number far surpassed the average number of fires we have seen in the past five years including the start of the lithium-ion wave of 2018 where we incurred 158 fires during the same time. At Fire Rover, we responded to 77 fire incidents at our clients’ facilities to go along with the 74 from April and 88 from May. 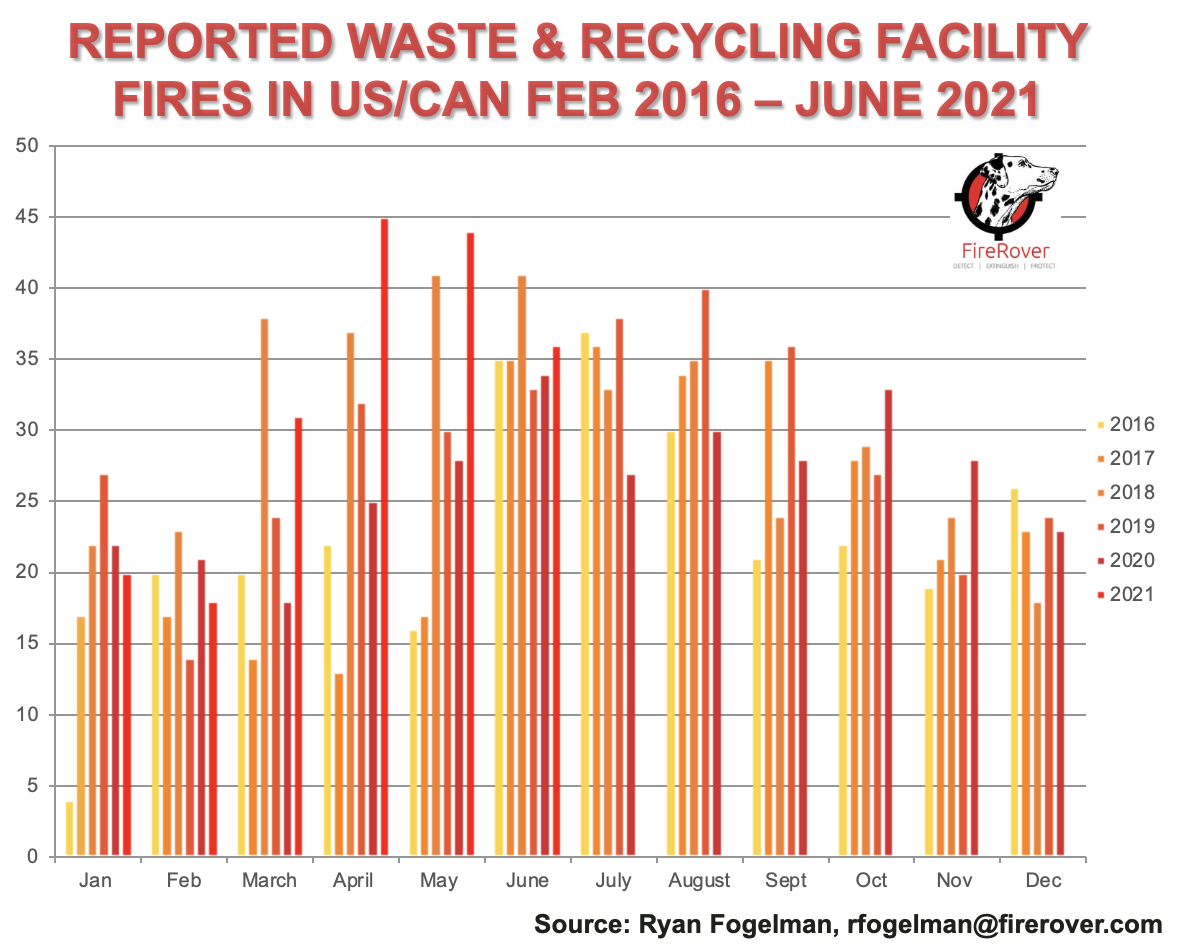 The fire incidents we have experienced during the past four months are clearly not an aberration. We are dealing with fundamental factors in the waste and recycling supply chain. To put this into historical perspective, I have updated the annual incident data to include 2021 numbers. The numbers are based on the trend for the first half of this year, but as you can see pretty clearly, if things don’t change, we are facing the worst year for fires at our waste and recycling facilities since I began keeping records in 2016. 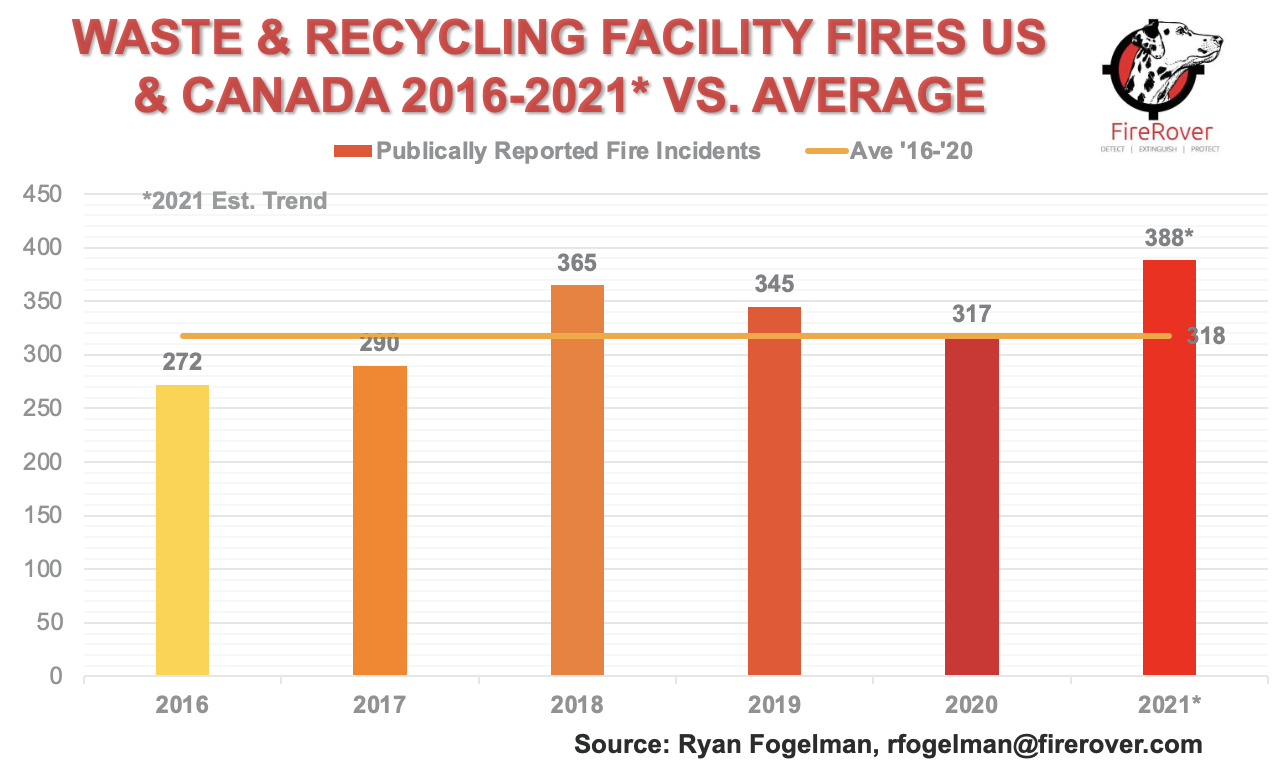 Is There a Particular Sector Driving the Increase in Fire Incidents?

I asked the same question last month, but I wanted to make sure I was not missing anything. 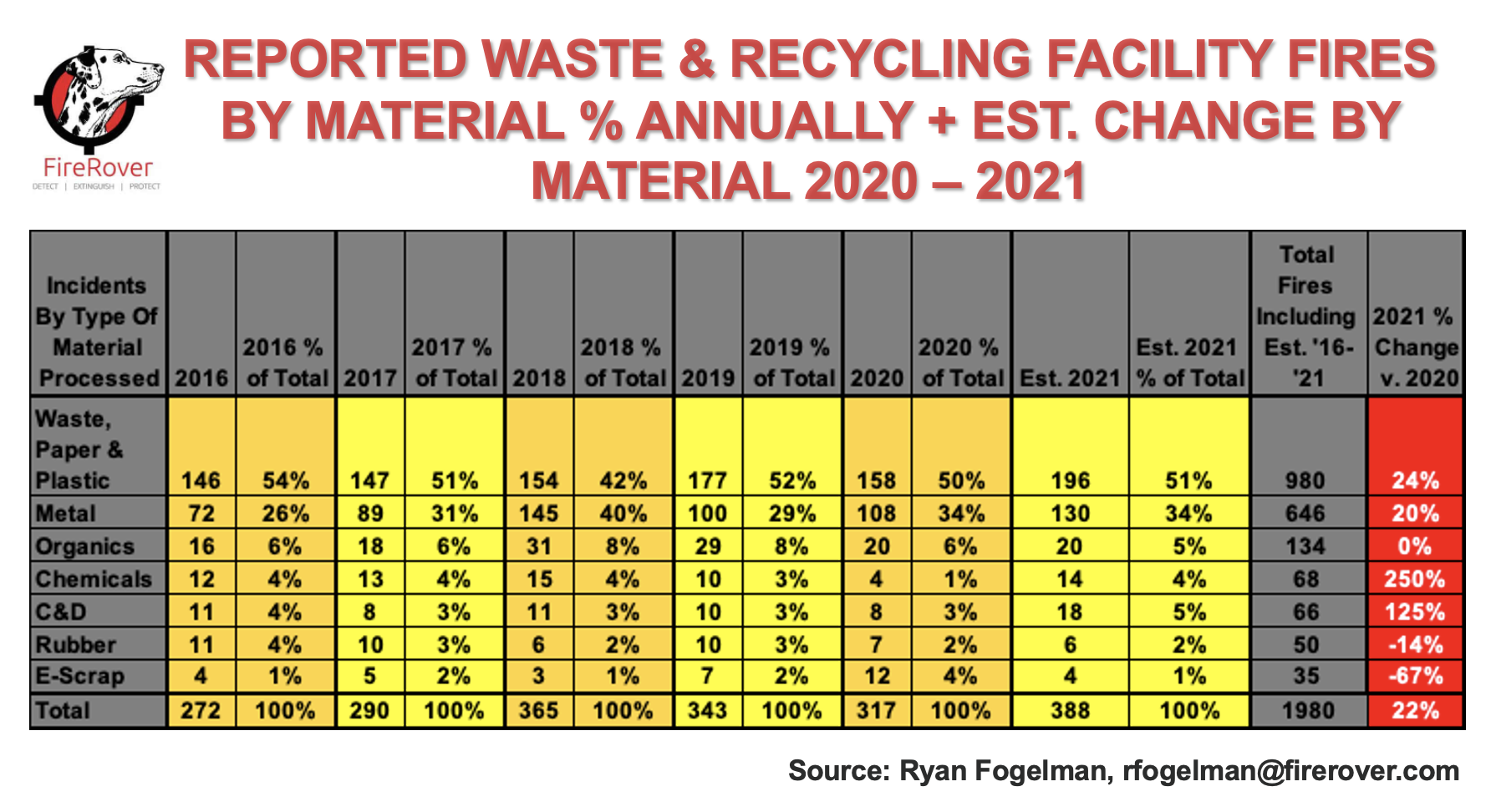 The issue is the increase in fire incidents from 2020 to 2021. Waste, paper and plastic is on trend to be 24 percent higher this year than last year, scrap is forecasted to increase 20 percent and, although on a lower number, C&D is expected to increase 125 percent.

What Possible Factors Have Led to the Spike in Fires?

Last month, I broke down the factors I believe are leading to the uptick in fire incidents, including lithium-ion battery increases, heat and dryness, staffing shortages and increased material. This month, I’m taking a deeper dive into each of those factors.

We all know that the number of batteries in the waste and recycling streams has been increasing and will continue to do so for the foreseeable future. It is true that the industry is aligning to increase awareness of these hazards, but unfortunately, I have not seen anything in educational programs that shows that this will solve the problem in any significant way without a monumental investment in a national campaign to change public behavior.

I personally believe that, at minimum, a third of the dollars earmarked for education should be reallocated to help train both career and volunteer firefighters. More importantly, we need to provide the proper equipment for these firefighters to be successful fighting our fire incidents. I also think that these dollars need to be reallocated toward proven risk mitigation technologies and solutions like the Fire Rover that can detect and eliminate these fires early enough to properly combat these incidents.

Increased heat has been a major suspect over the years, and this year is no different.

According to an article in Vox, “the Pacific Northwest is sweltering under a record-breaking heat wave. Portland reached 116 degrees Fahrenheit this week. Seattle reached 108 degrees. Vancouver reached 89 degrees. The searing heat has buckled roads, melted power cables and led to a spike in deaths. It’s especially concerning in a region like the Pacific Northwest, where few buildings have air conditioners.

This follows weeks of extremely high temperatures across the Northern Hemisphere and an early-season heat wave in North America that triggered heat warnings for 50 million people. Scientists say these record highs align with their expectations for climate change and warn that more scorchers are coming.”

Staffing shortages are continuing to plague all industries in the U.S., including waste and recycling, during this post-pandemic recovery. This is making it harder for our nation’s operators to process their material, leading to a higher risk of material on the floor, less ability to presort material and a greater challenge of removing dangers from waste and recycling streams.

Then it came to me: we have become a nation of sanitizers and disinfectors. We have become “Sanitization Nation.” Before the pandemic, we saw those products in our waste and recycling streams but not to the level we are seeing today. Early in the pandemic, the United States Centers for Disease Control and Prevention (CDC) recommended “if soap and water are not available, CDC recommends consumers use an alcohol-based hand sanitizer that contains at least 60 percent alcohol.” This recommendation caused an increase in the purchase of these products as well as the disposal. When you add the increased volumes of bleaches, disinfectants and more, we have a system loaded with accelerants that only need a spark to become an event.

So, where do you think all of these products go once we, the public, are done using them? I have been told that the alcohol is supposed to evaporate, like it does when we rub hand sanitizer into our skin, but what about half-empty containers? Just like with paint thinners on rags, when we place these containers into a garbage bag and bin, place them out on the curb in 90 degree weather and then dump these containers into the back of a truck, all we need is a spark, and there is potential for a major issue.

Take a look at the video below, where I show how these types of products can burn, fast and clear. All you need is a spark, which we know all too well since we see a ton of them in our daily operations.

While this issue increased during the pandemic, we unfortunately can’t expect this change in consumer behavior to go away anytime soon. According to an article in The Wall Street Journal, “Gojo Industries Inc. added both a factory and a warehouse—the family-owned company had just one of each before the pandemic—and restructured its supply chain, all with the expectation that demand for hand sanitizer will remain exponentially higher than before the pandemic.”

The one thing I often hear from anyone who has been the unfortunate victim of a major facility fire is that there was a series of unrepeatable events that led this incident to happen, but the truth is that the stars align more often than we think.

At Fire Rover, we have put out 200-plus fire incidents at our clients’ facilities that were all due to events where the stars aligned. My sincere belief is that like a number of other industries, we have to accept the fact that there is an inherent risk of fires in the waste and recycling occupancy. Similar to the big oil industry that combats its risk with internal fire brigades at its refineries, the waste and recycling industry needs to protect itself with fire prevention best practices as well as fire protection technology and equipment. We have too many factors in place to think that educating the public alone is going to solve the problems we face.

Ryan Fogelman, JD/MBA, is vice president of strategic partnerships for Fire Rover. He is focused on bringing innovative safety solutions to market, and two of his solutions have won the distinguished Edison Innovation Award for Industrial Safety and Consumer Products. He has been compiling and publishing the “Reported Waste & Recycling Facility Fires In The US/CAN” since February 2016 and the “Waste & Recycling Facility Fires Annual Report.” Fogelman speaks regularly on the topic of the scope of fire problems facing the waste and recycling industries, detection solutions, proper fire planning and early-stage fire risk mitigation. Additionally, Fogelman is on the National Fire Protection Association’s Technical Committee for Hazard Materials. (Connect with Ryan on LinkedIn at https://www.linkedin.com/in/ryanjayfogelman or email at [email protected])