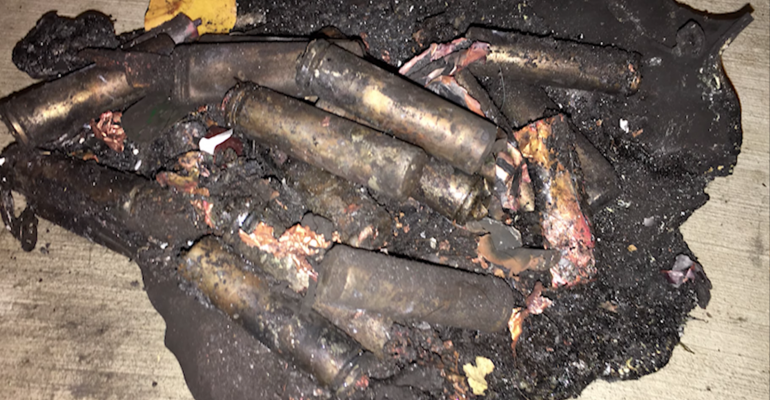 When Call2Recycle was founded in 1994,  the battery collection program focused on extended product responsibility regulation for nickel cadmium batteries.

With the shift of portable technologies to lithium-ion power, Call2Recycle now annually collects 3 ½ million lbs. of batteries in North America.

In 2018, the company launched a successful pilot program in the Bay Area called “Avoid the Spark” to educate consumers about the safe recycling and the associated risks of battery fires. It also works with manufacturers to launch products aimed at mitigating the risks of transporting batteries.

Getting to the End of Life

When talking about the end of life for a battery, the supply chain for the used item is complicated, Frederickson said.

Batteries are dispersed based on their use to consumers and businesses, eventually ending up at collection sites. Lithium-ion batteries are not recycled with the same technology as alkaline batteries or nickel metal hydride batteries, making the process of going to a smelter and refiner arduous.

“It's important to understand that from the consumer all the way to being reintroduced into the commodities market, there's a lot of expense and complexity associated with recycling batteries,” Frederickson said. “One of the most important things to consider in a recycling program is the diversity and complexity of the collection networks. Because the collection networks need to be both where the batteries are in the hands of the consumers but also catered to the types of batteries that are being collected.”

The most important thing to communicate and consider for consumers is the fact that despite a lithium-ion battery being at its end of useful life, it will still contain 80% of its thermal capacity. So, they must be handed with the same caution as a new battery.

Frederickson also said it’s important for consumers to know that they shouldn’t remove batteries from devices that aren’t intended to be removed. Many have thin outer walls and can be damaged, causing thermal runaway.

“It's also important for consumers to know that lithium-ion batteries should be individually taped or bag because short circuits are connecting the positive negative terminals with a piece of metal is a common source of thermal runaway,” he explained.

In regards to wishcycling, the high-risk aspect of lithium-ion batteries must be reinforced. Throwing batteries in the blue recycling option often is the source of many of the fires seen in the waste and recycling industry.

Thermal runaway begins as sudden acceleration of a battery’s temperature, which leads to fire within milliseconds. Because thermal runaway occurs when lithium-ion batteries are pierced or punctured from material shredding, segregation is crucial. Batteries should be stored inside or outside of humid and wet conditions. Rainwater, especially combined with salty air, can cause internal short circuits a lead to thermal runaway even if the battery has not been damaged.

“It’s important for waste handlers to have some type of some type of media to put the battery in if they start to see an at-risk battery,” Frederickson said. “Generally, sand is the most commonly available and low-cost type of material to have on hand if you have a battery that's starting to go into thermal runaway.”

A “patchwork” of different legislation dictates what parties are responsible for lithium-ion battery recycling.

“In some cases, it's the maker or producer of the battery, which is also called the brand owner,” Frederickson said. “But there are also there are also places where the responsible party is the retailer, or even what's called the importer of record, which is the intermediary retailer who brings the battery into that regulated area.”

Eight states currently have provisions for rechargeable batteries: Minnesota, Iowa, New York, Vermont, Maine, New Jersey, Maryland and Florida. California has a retailer-based EPR law as well as a disposal ban. Vermont has the only primary battery bill in the country. Frederickson also mentioned the nation’s first-ever all battery bill with extended producer responsibility for both primary and rechargeable batteries which was passed in December 2020.

A number of EPR legislation has been introduced, which Frederickson detailed: