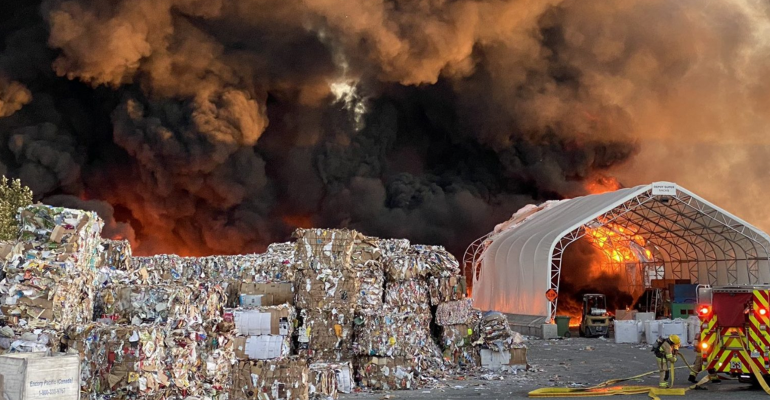 Sarah Edwards, Eunomia CEO, said to pardon the pun, but the waste and recycling industry has seen an "explosion of incidences in our waste management collection system and processing systems that are caused by lithium-ion batteries."

During an NWRA webinar, the UK-based research and consulting group along with Call2Recycle spoke about the dangers of lithium-ion batteries and discussed methods that are helping to reduce battery fires.

The impacts of a lithium-ion battery fire don't just impact the health and safety of workers. Recycling facilities inherit a business risk and cost associated with these incidents as well. Edwards pointed to the rise in costs of insurance premiums that come along with the increase in fires. While there previoulsy were 20 insurance providers in the waste and recycling industry, that number has been halved as MRFs take on significant risk.

Edwards explained that the cost of lithium-ion batteries has dropped 8% in the last ten years.

"Across the board, the cost of using lithium ion batteries has decreased, and as a result of that we're seeing them in a much broader array of consumer products. And these these items are kind of embedded in the in those products," she said.

From smartphones to electric toothbrushes to singing birthday cards, the proliferance of lithium-ion batteries can be seen in a myriad of goods. Eventually, the batteries come to the end of their useful lives and are simply thrown in curbside containers and trash bins. Edwards pointed to "wishcycling," or the consumer's hopes that once the item enters the waste stream that it will be recycled, as a factor.

"Many people think that it's appropriate to put their electric toothbrush or their e-cigarette within their recycling stream thinking that it might be might be recycled," Edwards said. "And obviously that comes down to kind of a lack of consumer awareness, both in terms of how the industry communicates how its products and packaging should be disposed at the end of life, as well as other things."

Sophie Crossette, Eunomia senior consultant discussed the company's research in partnership with the Environmental Services Association. The end goal was to understand and quantify the issue of waste fires.

"We know they were occurring all the time, a nd they're getting scarily big in some instances, but we have no data," she said. "So, we set up our projects initially with two key aims. The first one was to try and estimate the number of fires. We have to look at the number of waste fires, and then to try and attribute the number to lithium-ion battery fires so we could start to get an understanding of what they might cost the sector and the wider economy."

The study trid to understand the financial burdem. Second, Eunomia targeted international best practices to see what methods have been successful in other countries. The goal was to develop an evidence base for methods that could be use to divert batteries away from trash bins and get them to correct disposal locations.

"We chose to focus on waste collection. So, the collection vehicles to the transfer stations, where waste is handled, processed stored as opposed to any sort of disposal or electrical appliance sorting facilities," Crossette said. "We recognize that there are issues so in scrap metal, electrical equipment and community drop off, but equally, they are projects in their own right. We very much chose to focus on - I guess the heart of where I deal with things - I'm very much about recycling collections transferring treatment."

The findings of the research, which were largely estimated, discovered 48% of the waste fires that occurred in the UK were attribute to lithium-ion batteries in 2019 and 2020. Eunomia looked at how the fires changed based on scale and found that the cost to the UK economy was $216 million a year.

"We think that number of fires is too low because of how we collected data and the fact that a lot of sites don't report them," she said. "And we think the costs can really sort of be dug into more because because we don't know the number. Not everybody's reporting the implications. And therefore we were pretty sure these numbers are too low."

Unsurprisingly to them, Eunomia found that 90% of costs are carried by the site operator. This encompassed the cost associated with material damage business interruptions and the  resources to deal with an incident. It did not take into account preventative measures such as fire suppression systems detection systems and mechanisms such as firewalls.

"It also doesn't include the cost of insurance, which as Sarah mentioned, is going up year on year as waste sites seem a less profitable business to cover insurance wise," she added.

Now that Eunomia had some numbers with which to work, the group came up with key recommendations. The first was to ban batteries and small electrical equipment from being thrown away in trash an recycling streams. People must be encouraged and educated about how to properly dispose of the items. In addition they must be provided with "good mechanisms" for disposing of batteries appropriately.

"If these measures don't generate the shift we need, we also  have a think about drs now - deposit return systems  -  to sort of really see if we can boost the numbers of batteries that are being collected for recycling and the electrical appliances that are going through the right groups to make sure that they're not in our waste streams causing us problems when we're shoveling around waste and processing it for treatment or recycling," Crossette concluded.

This is part one in a two-part series. The second part will summarize Call2Recycle's segment of the webinar, which includes 10 principles for running a successful consumer battery collection and recycling program.