Open Burning of Trash: A Hidden Toxin (Part One) 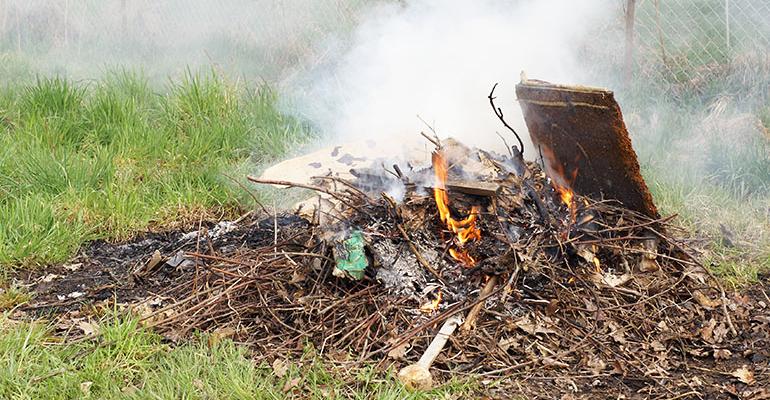 Part one of a two-part series this week takes a look at the problems caused by backyard trash burning.

In a two-part series this week, Rob Arner, consultant with Re-gain Enterprise, will examine the problems associated with backyard trash burning and what municipalities and government leaders are doing to address those problems. Read part two here.

The open burning of household trash directly affects Americans' health and welfare. This nation lacks any awareness or education regarding this activity. The open burning of trash can increase the risk of heart disease; aggravate respiratory ailments, such as asthma and emphysema; and cause rashes, nausea or headaches. Backyard trash burning also produces harmful quantities of dioxins, a group of highly toxic chemicals that settle on crops and in waterways, where they eventually wind up in our food and affect our health.

Typically, the trash burned can include plastics, paper or any other materials that would be recycled or landfilled. This may take place in an open pit, burn barrel, homemade burn box, wood stove or outdoor boiler. This backyard burning releases toxic air emissions directly into the atmosphere without being treated or filtered. This pollution is tough to track since it is unmonitored and unregulated. Also, scientists have difficulty factoring this air pollution in their studies and atmospheric computer models.

Uncontrolled, low-temperature burning and smoldering conditions are typical of backyard trash fires. Created are pollutants such as polychlorinated dibenzodioxins and dibenzofurans, sometimes collectively called "dioxins,” fine particulate matter and polycyclic aromatic hydrocarbons (PAHs). These pollutants form during backyard trash burning regardless of the composition of the material being burned.

Modern combustors, on the other hand, are designed to burn waste efficiently at high temperatures and to minimize the conditions known to promote the formation of these combustion byproducts. Studies show higher levels of dioxins are created by burning trash in burn barrels than in municipal incinerators since household burn barrels receive limited oxygen. Also, this trash burning usually happens at fairly low temperatures, producing not only dioxins but a great deal of smoke and other pollutants.

Large incinerators have stringent pollution-control systems that reduce dioxin emissions primarily by preventing their formation. Backyard burning is also particularly dangerous because it releases pollutants at ground level where they are more readily inhaled or incorporated into the food chain.

The most recent study was written by Alexander Cogut in October 2016, titled “Open Burning of Waste: A Global Health Disaster, for the Regions of Climate Action.” Below are portions from the executive summary:

Waste production rates have increased and are projected to increase significantly in the coming years to 2.2 billion tons per year in 2025, according to the World Bank. An estimated 41% of global waste is burned openly. In developing, low income countries that figure is even higher. Creating a well-executed waste collection program, or disposal mechanism is difficult in less economically developed countries. The practice is popular because it is a fast, effective and inexpensive way to reduce waste. Most open waste burning occurs residentially, is completely unregulated and, consequently, is nearly impossible to measure. An estimated 620 million tons of waste per year are burned openly. Much of the open waste burning occurs in dumpsites that have been filled far beyond their maximum capacity. Dumpsite waste fires are either started intentionally to reduce waste volume or occur spontaneously.

Below are the findings of a 2014 study published in Environmental Science & Technology, funded by the National Science Foundation. It was coauthored by scientists from the University of Montana and the U.S. Environmental Protection Agency:

Unregulated trash burning around the globe is pumping far more pollution into the atmosphere than shown by official records. A new study led by the National Center for Atmospheric Research estimates that more than 40 percent of the world's garbage is burned in such fires, emitting gases and particles that can substantially affect human health and climate change.

Unlike emissions from commercial incinerators, the emissions from burning trash in open fires often go unreported to environmental agencies and are left out of many national inventories of air pollution. For that reason, they are not incorporated into policy making.

Wiedinmyer said that actual emissions could be larger or smaller than the study's estimates by a factor of two. Still, the analysis represents the most comprehensive effort to date to account for emissions from trash burning.

"Air pollution across much of the globe is significantly underestimated because no one is tracking open-fire burning of trash," said NCAR scientist Christine Wiedinmyer, lead author of the new study. "The uncontrolled burning of trash is a major source of pollutants, and it's one that should receive more attention. The study concluded that as much as 29 percent of human-related global emissions of small particulates (less than 2.5 microns in diameter) come from the fires, as well as 10 percent of mercury and 40 percent of a group of gases known as polycyclic aromatic. hydrocarbons (PAHs). These pollutants have been linked to such significant health impacts as decreased lung function, neurological disorders, cancer, and heart attacks."

There is increased concern about air pollution. In a survey of leading British health professionals, nine in 10 said air pollution was harming children in their areas, and a similar proportion (92 percent) said the public needed to be better informed about the issue. These experts state that families and parents are worryingly unaware of the severe damage air pollution is doing to young people in the U.K. All open-burning activities produce smoke and harmful pollutants—some of which are toxic. Repeated exposure to smoke can also cause developmental problems in children and increase people's chances of getting cancer. Children, the elderly, those with lung problems and pregnant or nursing women may suffer more serious health effects than other adults.

Due to increasing climate change, air pollution all over the world is increasing in 2019. A study, published February 4 in Nature Climate Change, shows that the contrast in warming between the continents and sea, called the land-sea warming contrast, drives an increased concentration of aerosols in the atmosphere that cause air pollution. Aerosols are tiny, solid particles or liquid droplets suspended in the atmosphere. They can come from natural sources, like dust or wildfires, or human-made sources, such as vehicle and industrial emissions. Aerosols affect the climate system, including disturbances to the water cycle, as well as human health. They also cause smog and other kinds of air pollution that can lead to health problems for people, animals and plants.

Bassam Khawaja with Human Rights Open wrote in December 1, 2017, regarding uncontrolled burning in the Mideast:

Burning of waste is a dangerous and avoidable practice that takes place across Lebanon. Because it risks causing a range of short and long-term health problems, it implicates the Lebanese government’s legal obligations to protect the health of its citizens. In Lebanon, open burning is a consequence of the government’s failure to manage solid waste in a way that respects environmental and health laws designed to protect people. Children and older persons are at particular risks.

For 40 years, Rob Arner has worked on water quality improvement programs and resource management issues. He has experience in implementing all types of conservation programs in the Washington, D.C., area and in other parts of the U.S. and abroad. Also, he has provided technology transfer and technical assistance in all aspects of pollution prevention.