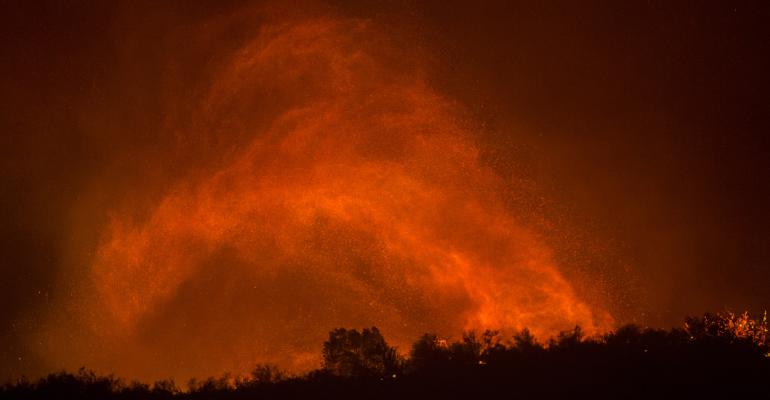 Ryan Fogelman has been tracking fires since January 2016.

Fires have been a dangerous hazard in waste and recycling facilities for decades, but new research from Fire Rover Vice President of Business Development Ryan Fogelman allows us to learn more about the extent of the problem in the U.S. and Canada.

Waste and recycling facility fires can be caused for a variety of reasons, some of them more preventable than others. Other than being dangerous to the workers at these facilities, they can cause unwanted shutdowns and greatly decrease the efficiency with which the facilities can process material.

For the last two years, Fogelman has been collecting data on these incidents, presenting his findings in the 2017 edition of  “Reported Waste & Recycling Facility Fires in the U.S. & Canada.” The report is an attempt to provide the waste and recycling industry with a baseline of information to assist in the understanding of what Fogelman calls an epidemic of fires.

Fogelman began keeping tabs on fires throughout the industry in the beginning of 2016, after he was surprised to discover that such information was nowhere to be found in the U.S. and Canada. “Everyone in the industry anecdotally knew that there were fires, but there was no data,” says Fogelman.

Fogelman, who joined Fire Rover to assist with business development, began asking around; searching for any hard numbers regarding this issue that everyone seemed to be aware of off the record. “I thought there had to be an organization like the U.S. Environmental Protection Agency (EPA) or Occupational Safety and Health Administration (OSHA) that had this data somewhere. No one had it,” says Fogelman.

So, he began tracking the incidents himself, using various keywords to comb through news alerts and slowly develop a picture of fire prevalence in North America. Now, Fogelman has amassed roughly two years of data, and a few trends are beginning to show.

In 2016 (without tracking the entire month of January), Fogelman accounted for 272 fires in the U.S. and Canada. In 2017, he tracked 287 fires. These figures account only for reported fires, and Fogelman, along with many others in the industry, believe the numbers are too low to be accurate. As Fogelman states in his report, “We can assume based on our experience that the number of ‘non-reported’ fires that occur on a daily basis in recycling operations across the US and Canada is significant.”

The biggest trend that Fogelman has recognized in his research is the increased frequency of fires in the summer months. There were 145 documented fires from June 2016 through October 2016 and 167 during the same period in 2017. Fogelman offers multiple potential reasons for such an uptick, including dryer material, increased lightning strikes and fireworks. He also mentioned the potential role that climate change could be playing, noting that the increased temperature “certainly isn’t helping the situation.”

Another trend mentioned in the report is a smaller, seasonal spike between Thanksgiving Day and New Year’s Eve. Fogelman attributes this to the sharp increase in the amount of waste tonnage over the same period each year.

When broken down by state, California had the most reported fires by far with 26 in 2017. Pennsylvania, Ohio and Texas followed behind with 17, 15 and 13, respectively. South Dakota was the only state in 2017 to have no fires reported, although nine different states had only one reported.

Fogelman’s data can also be broken down by the type of material processed at the facility. Waste and metal comprise the majority of the reported fires, with waste accounting for 41 percent of fires and metal accounting for 31 percent.

Fogelman notes in his report that the prevalence of metal fires, while surprising to some, becomes easier to understand when one considers the sheer tonnage of metal that is processed each year. Per OSHA data, 56 million tons of iron and steel are processed in the U.S. annually.

One particular waste item that could have an outsize impact on facility fires in the coming years is the lithium-ion battery. With technological advancements making batteries smaller and cheaper to produce, the quantity of batteries on the market, and therefore in waste and recycling facilities, is expected to spike in the coming years.

While technology has allowed them to be smaller and cheaper, they’ll remain just as much of a fire risk as they’ve always been. “Lithium-ion batteries have a tendency to get worse when they’re treated roughly, and the process of waste and recycling is very rough. We throw our trash in a front loader or we hit it with a bulldozer,” says Fogelman.

The unique danger posed by the batteries comes from their potential to undergo a mini-explosion at any point of a facility’s process. Their small size makes it practically impossible to prevent every single battery from entering a dangerous, combustible environment.

The recent Chinese waste import ban could also have an impact on the coming statistics, notes Fogelman, as facilities are dealing with tons of extra plastic and paper waste that had previously been shipped out of the continent.

Solving any problem is impossible if the problem isn’t fully understood. Although there is certainly much left to be discovered and plenty of fires going unreported, Fogelman’s research is a step in the right direction.