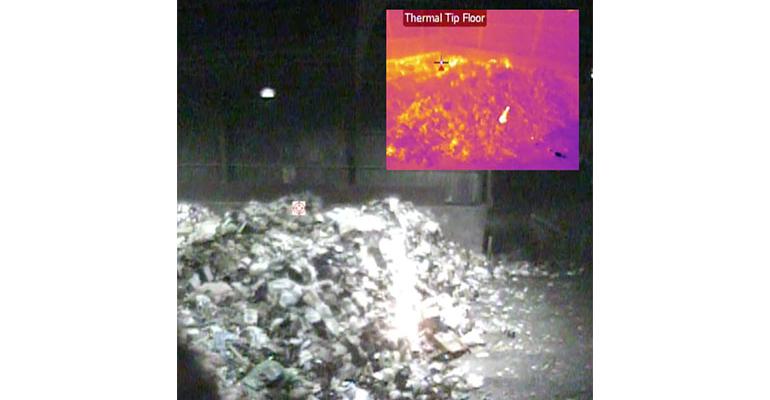 This month, Fire Rover’s Fogelman shares incidents that customers have agreed to share for the greater good of safety.

I am proud to report that in November, we continue the reprieve that I reported last month. The number of reported waste and recycling facility fires that occurred in the U.S. and Canada totaled only 20 fire incidents. This is the lowest number of reported fires we have seen since November 2016. Can we celebrate? Considering that in July, August and September of this year, we have experienced record high numbers of fire incidents, I remain cautiously optimistic and hope for December’s number to follow suit.

As Lou Brown, the fictional manager of the Cleveland Indians, so famously belted out in the cult hit "Major League," "We won a game yesterday. If we win one today, that's two in a row. If we win one tomorrow, that's called a winning streak." 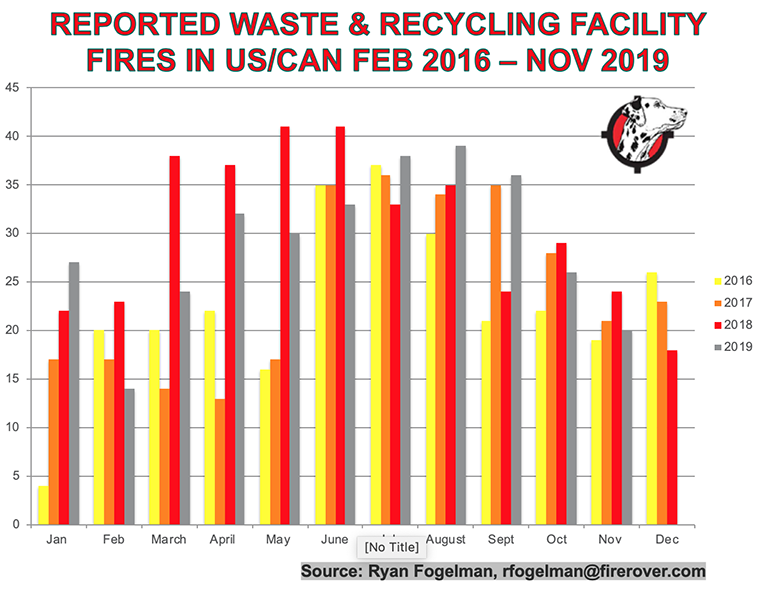 During the past 12 months, the waste and recycling industry has experienced 337 reported facility fires in the U.S. and Canada. Based on reasonable assumptions, we can extrapolate that 1,800-plus facility ﬁres have occurred during that time, which, based on the number of facilities reported by Environmental Research & Education Foundation (EREF), is more than 40 percent of the industry. I define “reported facility fires” as any fire that has been reported by the media that occurs at a waste or recycling facility in the U.S. and Canada. Typically, the fires that are reported by the media are larger fires that require fire professionals to arrive on scene and where there are affects that the public can witness. 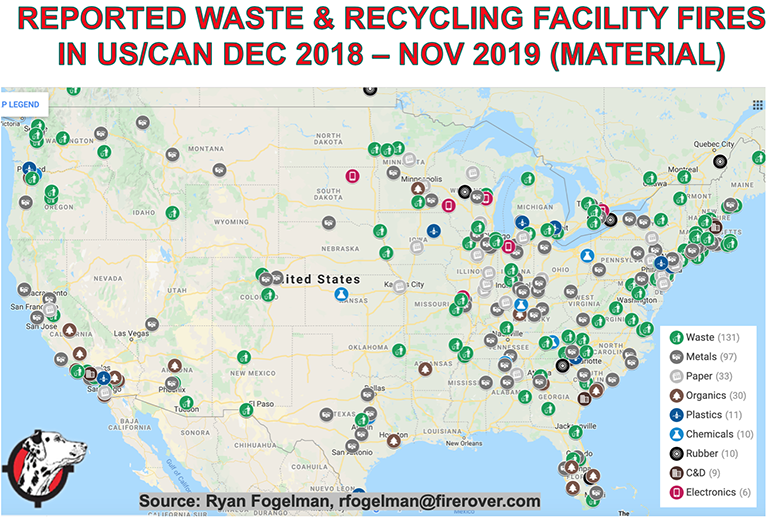 In an unfortunate turn of events, we added an incident from October that wasn’t reported in November that involved the death of one employee and injury to another. The death occurred from an injury due to an explosion at a metal recycling facility in Hawaii where two employees were hurt. The victim ultimately succumbed to his burns. If you would like to donate to the victim, a GoFundMe campaign has been set up to help with funeral expenses. Over the past 12 months, there have been 47 injuries that have occurred in 24 unique fire incidents, with a significant percentage of these injuries to the fire professionals. 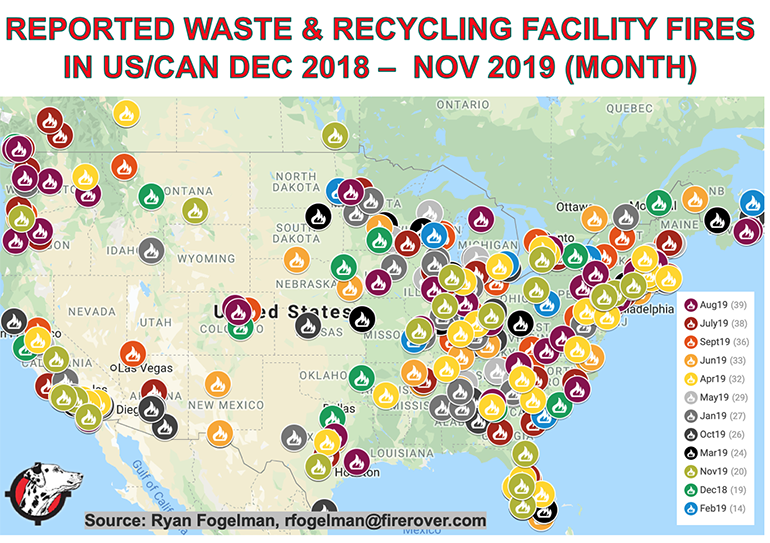 I have been extremely fortunate to work with fire professionals with a wide variety of expertise and industry experience. One of those colleagues, Dr. Chris Cloney, and I launched our respective fire incident databases at the same time—his focused on combustible dust fire incidents and mine on waste and recycling fire incidents. Cloney earned his doctorate degree researching dust, gas and hybrid mixture explosions. I highlighted his research in my February update in Waste360 this year.

Cloney was heavily involved in Explosion Safety Days Conference, a workshop held last month in Brilion, Germany. "Safety should not know competition" was the core idea of the event following the approach of Nils Bohlin from Volvo Group to make his invention of the three-point safety belt available to all car manufacturers in 1959, which truly saved millions of lives.

"Safety should not know competition." We can learn a lot from these words. In our industries, we compete with our competitors through our core businesses. The goal is developing efficiencies and operational excellence that drive a competitive edge. In my opinion, safety is not one of those areas. Safety best practices should be shared, discussed and amplified in order to protect our most important asset: human life!

In my position with Fire Rover, I am fortunate to be on the frontlines helping my clients mitigate their risks through innovating the way the waste and recycling industry prepares and combats the risk of fire. Over the years, we have eliminated hundreds of fire incidents at our customers’ operations and continue to do so every day. After each significant event, we work internally and with our customers to ensure we are not only celebrating a successful outcome but learning from the incident. As you can imagine, some incidents are typical where there was nothing we could have done to position for a better outcome. But, there are many incidents when sharing allows us to all learn from the event.

This month, I thought I would share a couple of incidents where our customers have agreed to share their incidents with the public for the greater good of safety.

In the first situation, a lithium-ion battery explodes on a full tip floor with a ton of material on the floor. The goal with a lithium-ion battery fire is to get stop the battery from getting to the point of thermal runaway. Utilizing our thermal detection capabilities, we detect the explosion and apply an environmentally friendly cooling agent from a remote location in order to quickly suppress the fire. We make quick work of the fire and ensure that thermal runaway doesn't occur at this site, avoiding the possibilities of a major fire incident.

In this next situation, we learn that the only truth we can count on when dealing with fires is to "never underestimate" their size and power. At first glance, this seems like a small municipal solid waste pile, but after early detection and almost 10 minutes of remotely applying our environmentally friendly cooling agent while our client removes the material bucket by bucket, we finally get to the bottom of the pile and extinguish the fire for good.

In the spirit of sharing, EREF has been working hard on a research project to determine and address the issue of fires at recycling facilities in the United States and Canada. The research project is in partnership with the National Waste & Recycling Association, the Institute of Scrap Recycling Industries and the Solid Waste Association of North America. The goal of the project is to find and identify “The Causes & Impacts of Recycling Facility Fires” across the U.S. and Canada.

In order to participate, there is a 100 percent confidential survey that EREF and its partners are asking operators to fill out in an effort to get more precise data on the true scope of the fire issues we face. Here is a link to the survey for operators.

If you are interested in learning more about the scope, consequences and solutions of fire safety, I will be presenting a webinar for the Massachusetts Department of Environmental Protection on Fire Mitigation Planning & Technology on December 11 from 9 a.m. to 10 a.m. ET.

Ryan Fogelman, JD/MBA, is vice president of Strategic Partnerships for Fire Rover. Fogelman is focused on bringing innovative safety solutions to market, two of his solutions have won the distinguished Edison Innovation Award for Industrial Safety and Consumer Products. He has been compiling and publishing the “The Reported Waste & Recycling Facility Fire In The US/CAN” since February of 2016, the “Waste & Recycling Facility Fire Annual Report” and speaks regularly on the topic of the scope of fire problems facing the waste and recycling industries, detection solutions, proper fire planning and early stage fire risk mitigation