July 2020 Fire Report: No Fireworks, No Problems and a Conversation with Chris “Mr. Nice Guy” Hawn! 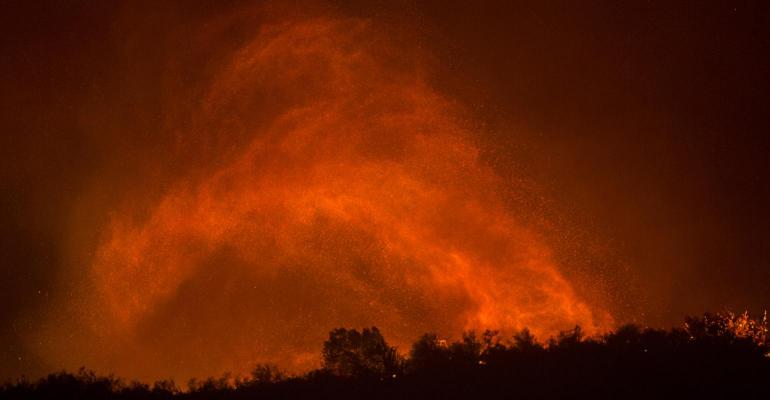 If someone would have asked me to forecast the number of fire incidents we would experience for the month of July, on July 1, I would have said 35 to 40. This is based on historical numbers and the increasing trends we have been experiencing since March.

But surprisingly, in July we felt a bit of a breather. We experienced 27 waste and recycling facility fire incidents for the month. The majority of these fires occurred in waste, paper and plastic recycling operations and scrap metal processing facilities. At Fire Rover, we eliminated 10 fire incidents at our clients’ operations using our Fire Rover solution, which I outlined in last month’s article and will continue to report on monthly. 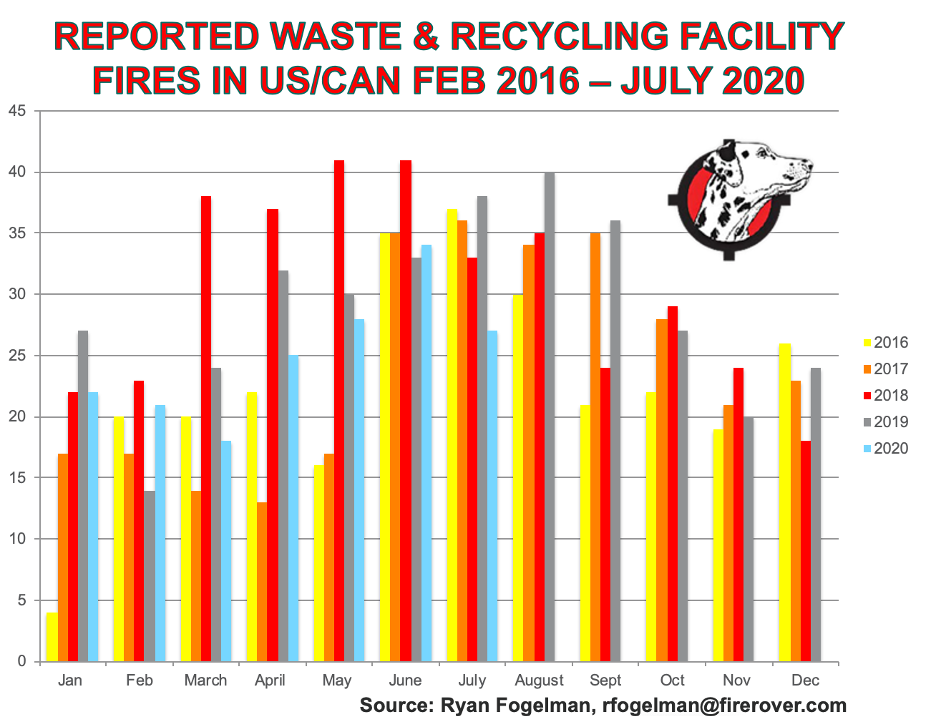 During the past 12 months, the waste and recycling industry experienced 322 reported facility fires in the U.S. and Canada. Additionally, we incurred 33 reported injuries and four deaths that can either be directly or indirectly attributed to these fire incidents. Based on reasonable assumptions, we can extrapolate that 1,800-plus facility ﬁres have occurred during that time, which, based on the number of facilities reported by the Environmental Research & Education Foundation, is more than 40 percent of the industry. I define “reported facility fires” as any fire that has been reported by the media that occurs at a waste or recycling facility in the U.S. and Canada. Typically, the fires that are reported by the media are larger fires that require fire professionals to arrive on scene and where there are effects that the public can witness. 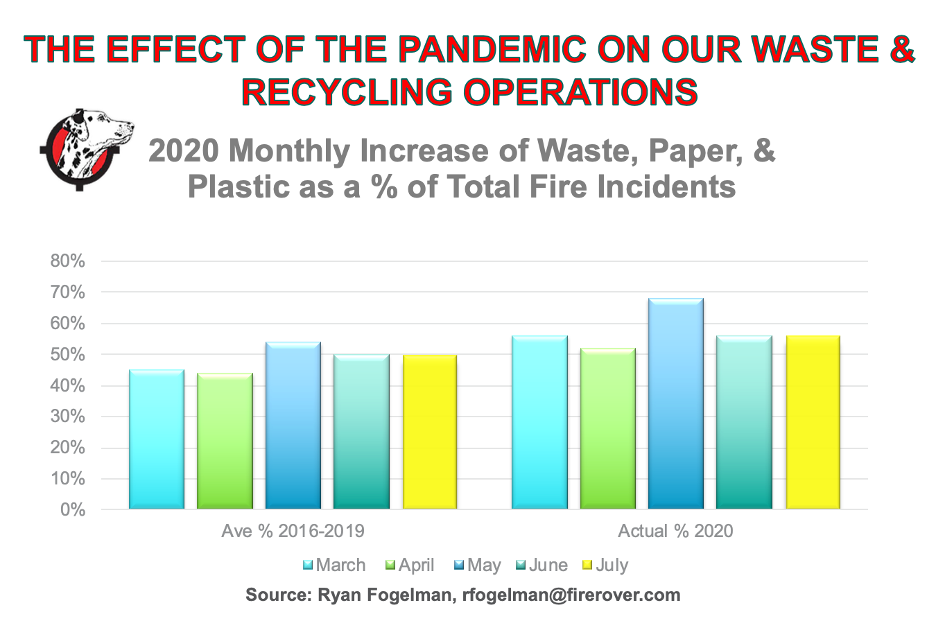 The question is, why are the numbers down as much as they are? I would like to hope that the public is finally understanding the risks associated with recycling and throwing away hazardous materials, but then I got to thinking: One of the major causes of increased fires in the summer months is improperly disposed fireworks or charcoal from summer get-togethers. As we all know, most of these events have been canceled for the summer because of social distancing orders. We will never know for sure, but if lower fire incidents are a silver lining to this dark cloud, we would be hard-pressed to complain.

A Conversation with Chris “Mr. Nice Guy” Hawn from Machinex

I can remember my first trade show that I participated in for Fire Rover. It was the 2015 Paper & Plastics Recycling Conference in Chicago, which is a great conference put on by Jim Keefe and his team. Being my first industry trade show, my grasp of the waste and recycling industry, the companies and the true scope of the fire risks were in their infancy. At that time, we had one Fire Rover installed at one customer’s scrap metal facility.

On the first day of the show, a gentleman approached our booth and asked me about the Fire Rover. Keep in mind at that show I was trying to learn as much as I could, and Chris Hawn proceeded to share his insight on a variety of factors. But most impressive to me was that he told me to hold on a minute and walked away. A minute later, he reappeared, accompanied by a vice president of recycling from one of the majors, and he proceeded to make a warm introduction.

Since that time, I have gotten to know Hawn pretty well. We are currently working on a materials recovery facility (MRF) project for the Marquette County, Mich., Solid Waste Management Authority, under the direction of industry veteran Brad Austin. We will be converting the MRF from a dual-stream operation to a single-stream operation and providing a performance-based approach using Fire Rovers to meet the county’s sprinkler requirement.

For this project, we’re also adding a few key features that we developed specifically for lithium battery operations, where fire departments are required to take a defensive approach because of a major incident that occurred last year in Surprise, Ariz.

In this incident, four firefighters were seriously injured, and four others and a police officer sustained less serious injuries, during the April 2019 explosion at the Arizona Public Service's McMicken energy storage facility. This facility used lithium batteries to store and distribute solar energy.

The report that followed states the issues that led to the event included:

In reality, what that means is that the fire department is going to come into a building that houses lithium power because the department needs the ability to fight the fires while remaining at a safe distance. To solve this problem, we have added a “quick connection” to the back of our Fire Rover units that allows the local fire authorities to connect a water source to our unit so that we can continue to spray after our internal tank is depleted (typically 10 to 12 minutes).

In addition, we have added separate 4G backups for redundancy, and we have a “sprinkler system” replacement that is far more superior in its ability to detect and address hazards and to communicate with the fire professionals in a timely and safe manner.

Ryan Fogelman: Folks always refer to the “MRF of the Future.” What does that mean from your perspective?

Chris Hawn: It means the use of more automation, which ultimately results in less manual labor. As you look at advertising from each manufacturer, it is clear that optical sorters and robots are the way of the future.

Fogelman: Where does fire protection fit in?

Hawn: The tip floor and bale storage area have historically been the best locations for fire detection and extinguishing. With the newer generation systems, which incorporate more expensive equipment, I would contest that an entire facility should be under constant thermal surveillance. This would include everything under the sorting platform and potentially on the infeed conveyors. With the increase in automation, it is easy to see the reduction in OPEX, (operating expenses) and I can only assume that it means significantly more CAPEX (capital expenditures). Why wouldn’t you ensure that kind of investment with fire protection?

Fogelman: Where do your waste and recycling customers see fires occur most often?

Hawn: As mentioned above, the most common location is on the tip floor where a “hot load” is brought in from a collection truck, dumped on the floor and exposed to oxygen. The bale storage area is another area to keep an eye on because you never know what has happened in the recycling process, and a smoldering incident could slowly but surely wipe out an entire MRF.

Fogelman: From a fire safety prospective, what is your best advice for these facilities?

Hawn: First and foremost, educating the general public about what is recyclable and making clear that batteries, aerosols and propane tanks are not part of the program. Community outreach is essential. Next, ensure that your drivers and equipment loaders are keeping a watchful eye on each load brought to the facility. At a bare minimum, I would suggest protecting each and every tip floor from exposure to an incident, as that’s where the vast majority of fires start.

So, whether July’s decrease in reported fire incidents was a blip or a new trend, the fire hazards and risks that we face as an industry are only going to get worse; but together, I truly believe we can slow the trend down and provide a safe, reliable infrastructure for our employees, our businesses and the greater good of the public. I don’t think anyone out there believes that recycling is not good; it just needs to make sense both financially and, dare I say, politically.

Ryan Fogelman, JD/MBA, is vice president of strategic partnerships for Fire Rover. He is focused on bringing innovative safety solutions to market, and two of his solutions have won the distinguished Edison Innovation Award for Industrial Safety and Consumer Products. He has been compiling and publishing the “The Reported Waste & Recycling Facility Fire In The US/CAN” since February 2016 and the “Waste & Recycling Facility Fire Annual Report.” Fogelman speaks regularly on the topic of the scope of fire problems facing the waste and recycling industries, detection solutions, proper fire planning and early-stage fire risk mitigation.  Additionally, Fogelman is on the National Fire Protection Association’s Technical Committee for Hazard Materials. (See)