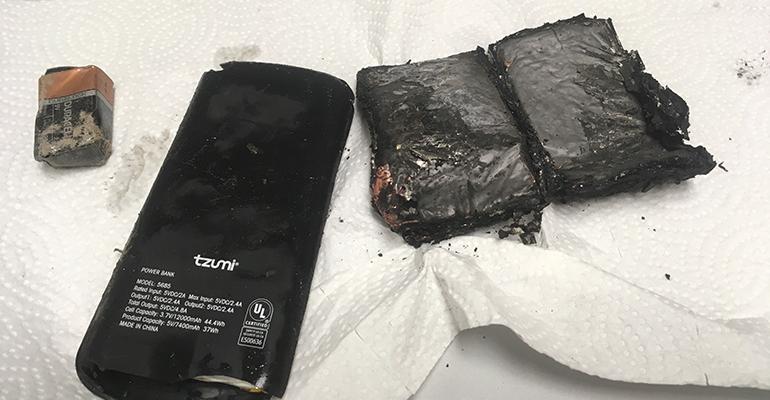 The number of lithium-ion batteries entering waste and recycling streams will not allow us to put our guard down. The epidemic we face is shared globally.

The number of reported waste and recycling facility fires that occurred in the U.S. and Canada in January 2020 totaled 22. 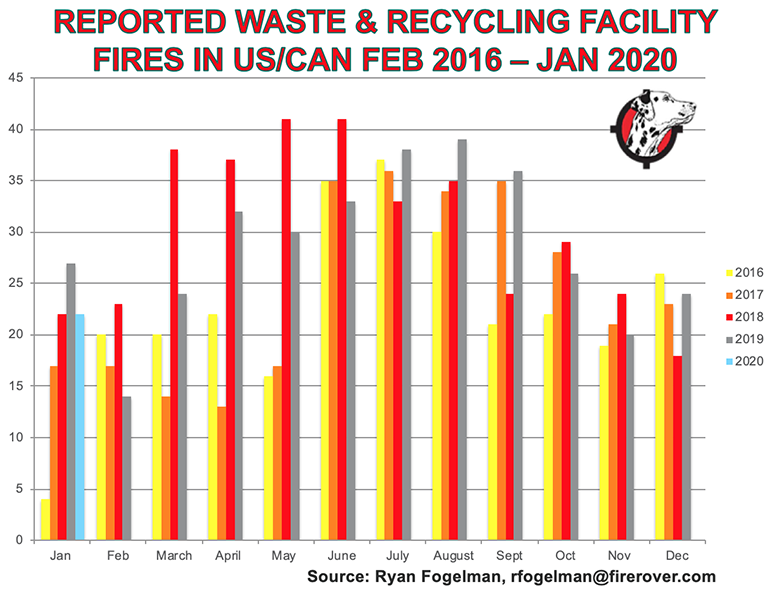 During the past 12 months, the waste and recycling industry has experienced 338 reported facility fires in the U.S. and Canada. Additionally, we incurred 48 reported injuries and four deaths that can be directly or indirectly attributed to these fire incidents.

Based on reasonable assumptions, we can extrapolate that 1,800-plus facility ﬁres have occurred during that time, which, based on the number of facilities reported by the Environmental Research & Education Foundation (EREF), is more than 40 percent of the industry. I define “reported facility fires” as any fire that has been reported by the media that occurs at a waste or recycling facility in the U.S. and Canada. Typically, the fires that are reported by the media are larger fires that require fire professionals to arrive on scene and where there are affects that the public can witness.

As I finish up the “2019 Waste & Recycling Facility Fire Annual Report,” which will be published later this month, I cannot help but be extremely proud of our industry. When I first started looking into this issue in 2015, there was little, if not no, attention paid to the specific fire hazards that we have faced for years. Since that time, every major waste and recycling organization including the National Waste & Recycling Association, Institute of Scrap Recycling Industries and Solid Waste Association of North America have started to develop or have published some type of fire safety standards/best practices. In addition, EREF is backing one of the largest fire surveys undertaken in the waste and recycling industry, which will hopefully provide much-needed insight from all players in our industry. The word is finally out that this problem is not going away and needs a combinational approach to keeping our facilities, our employees and the public safe from these incidents. We might not all exactly agree on the steps necessary, but no one can argue that any step is better than no step.

The problem is that the trends are not in our favor. The public education of proper recycling as taken hold; however, Call2Recycle just put out a press release that it successfully recycled 7.5 million pounds of batteries in the U.S. in 2019. The number of lithium-ion batteries that are entering the waste and recycling streams is not going to allow us to put our guard down. We need to double down. But it is helpful to know that we are not alone. The epidemic we are facing is shared globally. 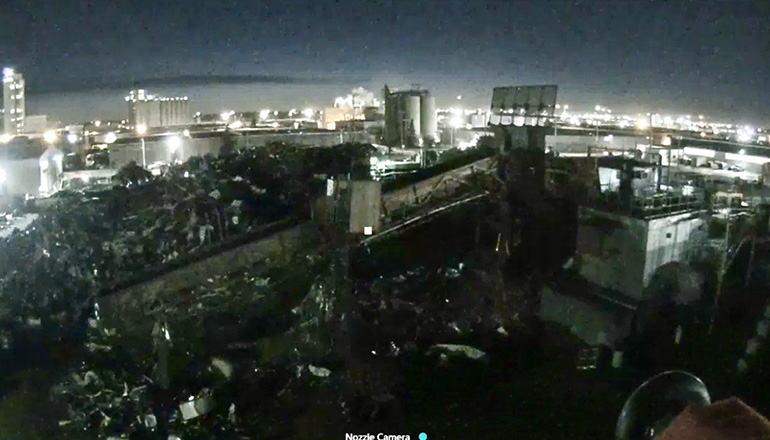 This month, my company Fire Rover achieved a major milestone. We have fully installed our Fire Rover solution at our very first international operation in Calgary, Canada. Take a look at the picture above of the skyline as the sun rises during our first week on guard. What you are seeing in this picture is the nozzle camera taking its first shot of the morning sky. To most folks outside of the industry, this is just a recycling operation, but to those of us who are part of the industry, we have a unique perspective and can appreciate this, dare I say, beautiful image. But it brings to life the real issue, which is that fires in the waste and recycling industry are truly a global epidemic.

The 1,800-plus actual facility fire number that I use for the U.S. and Canada is based on the assumptions from the data that the U.K. Environment Agency (EA) collected in the table below. The Chief Fire Officers Association also reported 250 fires in 2015 at waste and recycling companies, but they have been experiencing 300-plus fires for decades. The EA fire data was taken during a time when lithium-ion batteries were not as prevalent as they are today. These numbers are based on more traditional hazards of propane tanks, aerosols and chemicals. 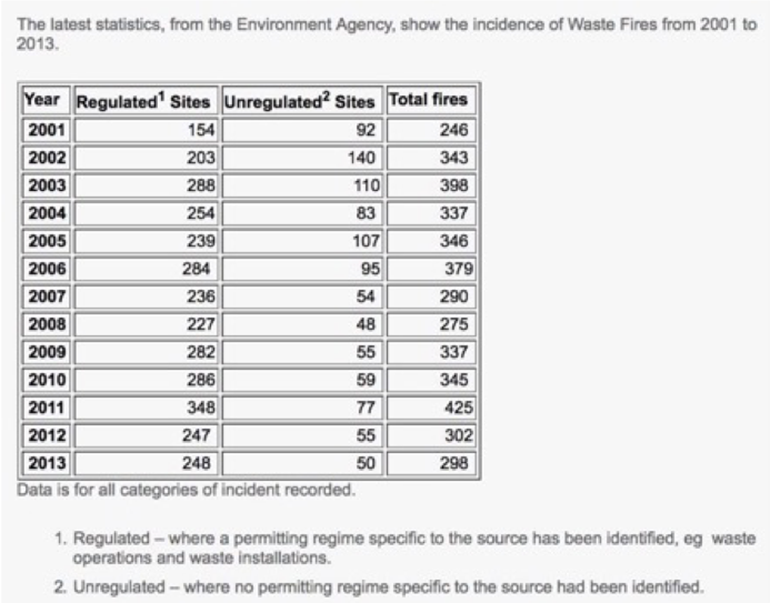 I have been searching for updated numbers and have yet to see any new data showing an increase in the number of fires in Britain. However, Veolia UK recently issued a press release that stated that fires in waste vehicles have increased by 37.5 percent since 2017.

To put that into perspective, Veolia has 113 lithium-ion battery drop-off sites and a very extensive waste and recycling footprint in the UK and Ireland. The press release goes on to say that the average UK resident throws away around 24.5 kilograms of electronics annually. That is 54 pounds of batteries per person, and less than half of residents are even aware that these batteries need to be recycled. Even if half are recycled properly, we are talking about roughly 800 million pounds of batteries that are comingled in sorting and processes operations.

Other countries, like Japan, are facing issues as well. According to an article in the Japan News section of The Asahi Shimbun last month, the Japan Containers and Packaging Recycling Association released data from its survey reporting that in fiscal year 2019, recycling facilities for plastic containers reported 230 incidents of smoke or fires by the end of December. This is up from 128 incidents in 2018 and less than half that number from 2013 to 2017. See the table below. It is clear that in the past few years, something has changed, and most data points to the additional lithium-ion batteries in the waste stream. 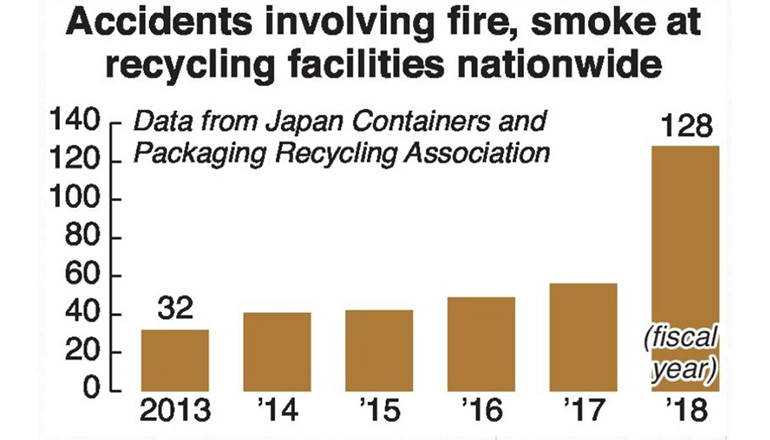 These increases of fire incidents in the past few years are consistent with what we are experiencing in the U.S. and Canada. See the table below that highlights my reported waste and recycling facility fire data with Nathan Brainard’s, vice president at Insurance Office of America, actual insurance claims data. We see big increases from 2017 to 2018, which is holding true even in 2019’s data that I reported in last month’s Waste360 article of 343 fires. Definitely better than 2018’s data, but the waste, paper and electronic fire incidents were up for the year with the big decrease coming from metal facility recycling fires. I get into the details in my annual report, but I believe we are seeing a new normal. 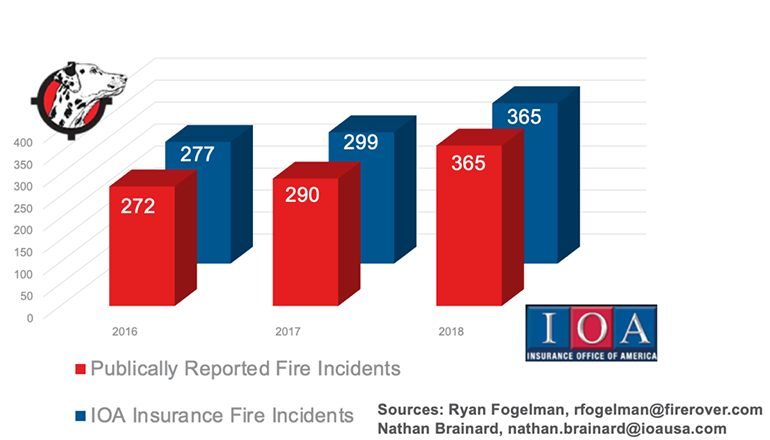 I have only highlighted Japan and the UK here, but a quick Google search will show we are not alone. There are numerous reported fires in Australia, the rest of the European Union and Asia.

The fact is that lithium-ion batteries are being cemented as our main power source for portable electronics, cars, storage and more. This is due to their small footprint, power capabilities and relatively safe technology when handled properly. We are rough on our waste and recycling materials, which can turn that relatively safe technology into a hazard with serious consequences. We need to continue to educate the public regarding this risk, develop the proper fire planning and increase fire protection infrastructure in order to protect these mission-critical facilities from fire incidents and their harmful effects.