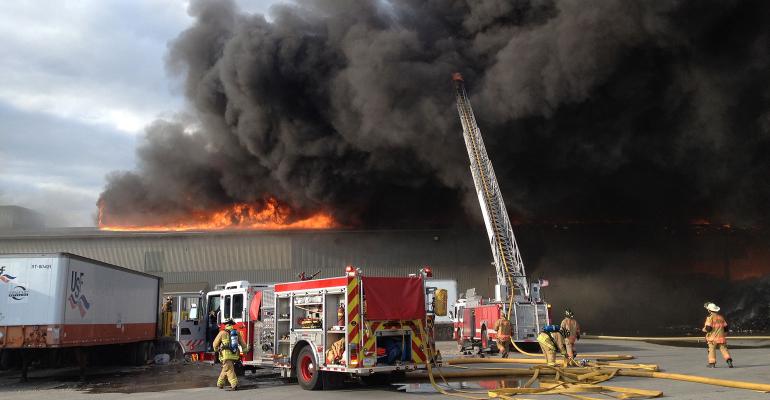 This January, reported fires have increased from 17 incidents in 2017 to 27 incidents reported this year.

During the past 12 months, the waste and recycling industry has experienced 371 reported fires in both the U.S. and Canada. Based on reasonable assumptions, we can extrapolate that 1,800-plus facility ﬁres have occurred during that time, which based on the number of facilities reported by the Environmental Research & Education Foundation (EREF), is more than 40 percent of the industry.

There were also three deaths and 13 injuries reported during that time. Most of these injuries are suffered by the brave fire professionals called in to fight and contain these incidents. 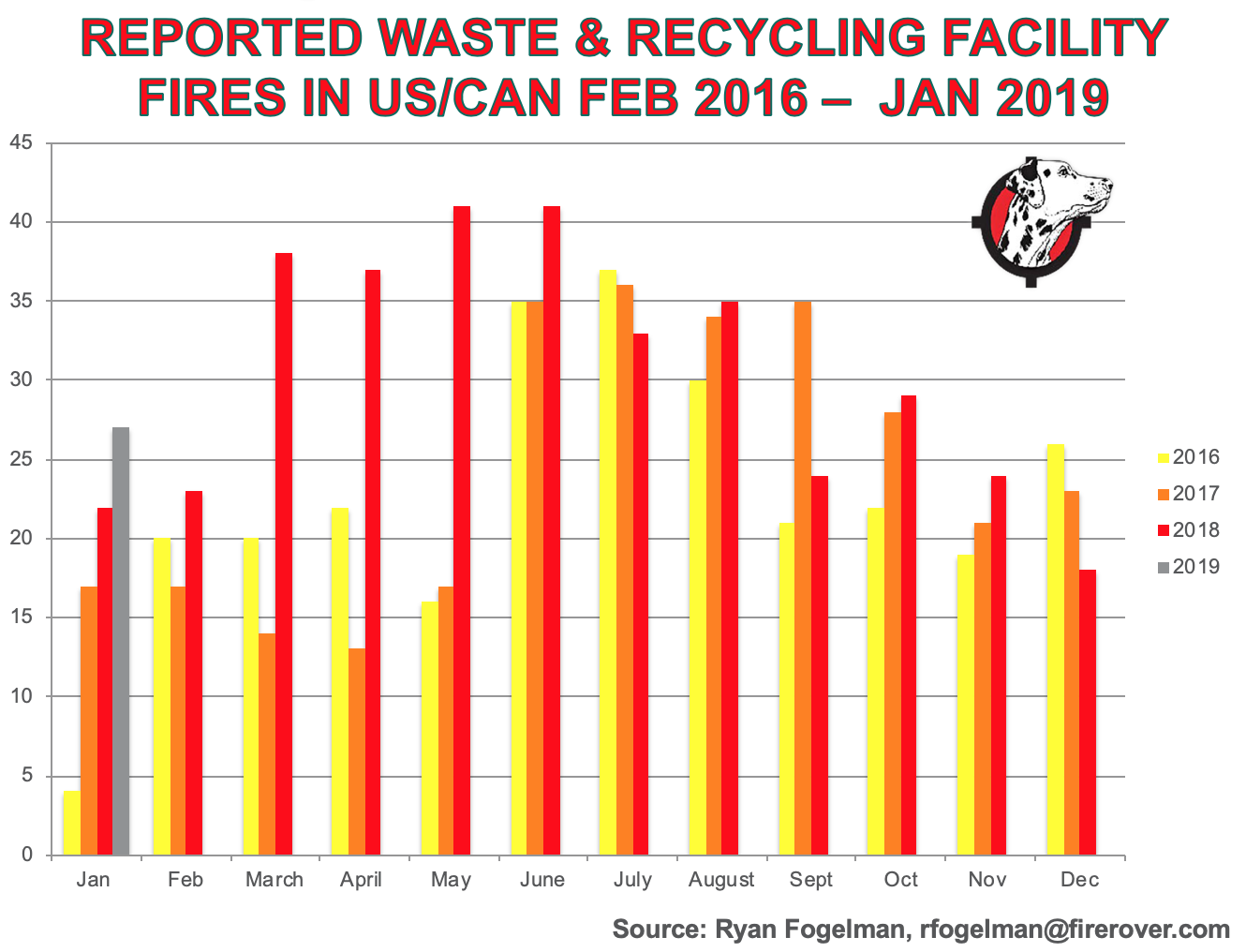 These fires are not only occurring at our materials recovery facilities (MRFs) and transfer stations but at our scrap metal, construction and demolition (C&D), paper, plastic, chemical and organics recycling operations and are caused by a list of fire hazards, including, but not limited to, lithium-ion batteries, pressurized tanks/containers, fuels, fertilizers, propone tanks, aerosols and more.

Most fires are caught during their very early stages, but as one can imagine, the fires that are being reported by news outlets have typically passed the incipient stages. Most of these incidents incurred significant damage and downtime and are required to be fought by our local firefighting professionals. 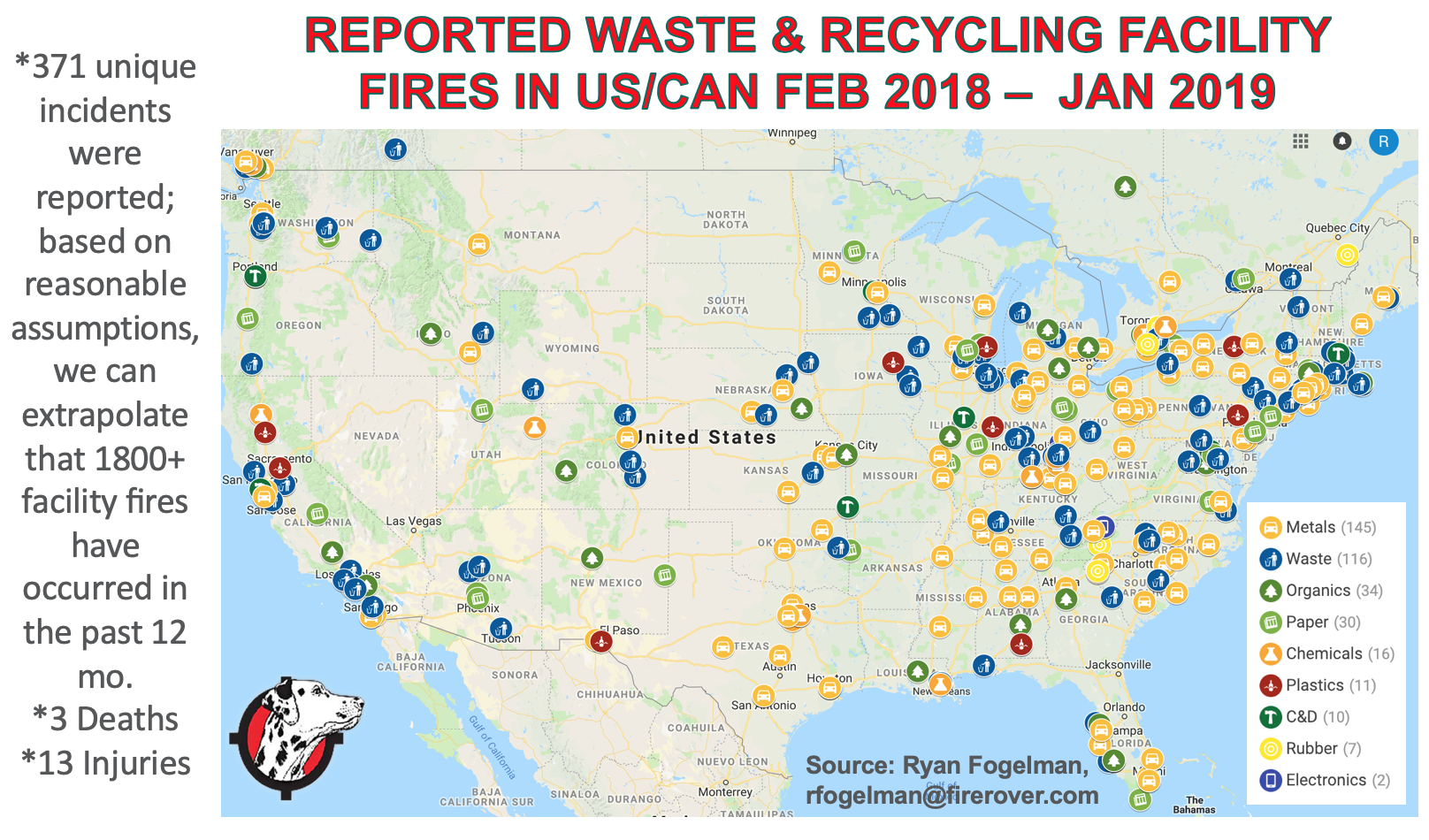 Causes of these fires range from traditional material hazards such as pressurized tanks, chemicals, hot work activities, hazmat and smoking to newer hazards like lithium-ion batteries. No matter what the cause or what the risk, even the best operators are not able to completely eliminate their risk of fire. It is imperative that they develop and continuously revisit their fire plan. The proper defense consisting of training, operations, equipment and technology can mean the difference between getting a fire incident under control early versus the alternative of a complete shutdown.

I met with Paul Kuhar from Champion Waste based out of Dallas to get his thoughts around the fire protection and prevention both in the industry and at his sites. As Kuhar and I spoke, I bulleted a number of key highlights he mentioned during our conversation:

If you have interest in learning more about the C&D side of the business, I would suggest attending C&D World, which will be held March 9-12 in Brooklyn, N.Y. Kuhar will moderate a fire safety panel that will include myself, John Schumacher from Assurance and Jim Emerson, a highly trained fire engineer with Starr Technical Risks Agency. The panel will focus on understanding how to mitigate the risk of fire in your operation from the insurance perspective, specifically focused around the Combinational Approach to planning for a waste and recycling facility fire.