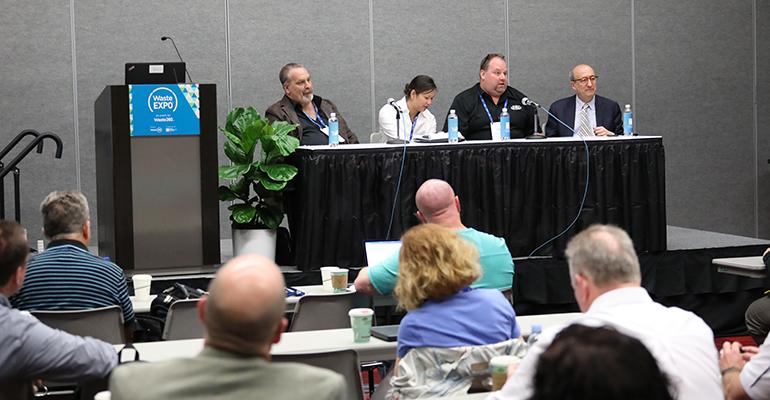 Check out some of the key moments from the inaugural NWRA Safety Symposium during this year’s WasteExpo.

At this year’s WasteExpo, the National Waste & Recycling Association (NWRA) held its first-ever Safety Symposium, which delivered four information-packed hours of insight from some of the most known industry players. Joining them was David Michaels, former and the longest-ever serving assistant secretary for the Occupational Safety and Health Administration (OSHA).

The menu of panel discussions and other presentations provided an update on a proposed change to a federal hauler rule that waste companies have been watching closely. It included thoughts on why calling safety a “priority” is wrong, and what term would be better. There was dialogue on the connection between safety and profitability. And both speakers and attendees shared heart-wrenching stories of tragic accidents within their operations and their lasting impacts.

Michaels was the first to take the stage, proposing to attendees that workplace safety is not so much about compliance.

“You have to do much more than [comply]. You have to think creatively and adopt a culture. You have to set a standard on how employees work,” he said. 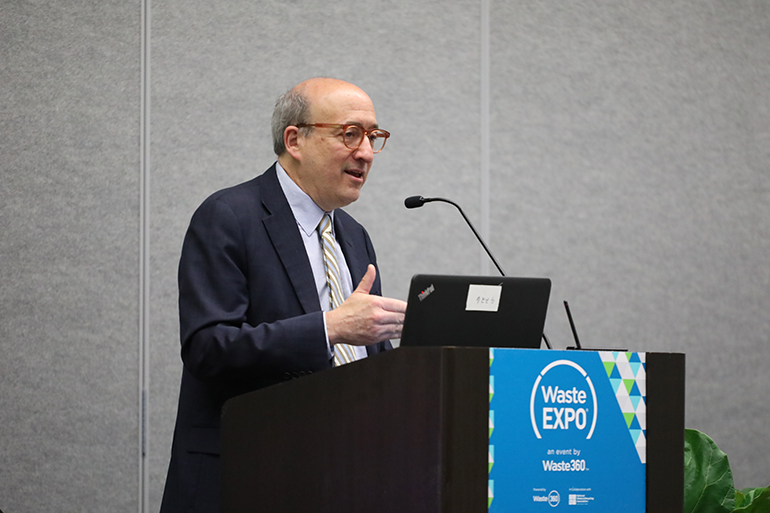 He explained OSHA’s role and the OSHA Act of 1970, which states employers must provide safe workplaces. The law puts the onus on employers to commit to safety and to take action if workers are not following direction.

However, the agency did institute the rapid response investigation for severe injury, which involves a collaborative, problem-solving approach where employers and the agency work together toward shared goals. The idea is to engage employers and the workforce in addressing the problem, he said.

“Employers say they focus on safety because it’s the right thing to do; some say it’s because they don’t want penalties, and some look at their worker comp bills, or cost related to replace an employee or time lost. But I find none of these drive safety enough,” said Michaels. “I also hear the phrase 'safety is a top priority.' It’s not a priority; it’s what we do. Safety is a culture. We should talk about a safer operational culture, and it must come from the top because if top management doesn’t say and live it, it’s not going to happen.”

Business schools teach there is tradeoff between safety and profitability, he pointed out. But he disagreed, contending running a safe operation is actually a value proposition. He cited examples such as Hasbro, which opted not to move a plant to Asia because the corporation would not be holding up to the standards of OSHA’s Voluntary Protection Programs requiring commitment to go past OSHA standards to ensure safe operations. Because Hasbro did safety right, it was more profitable, he said.

The flip side is Union Carbide that did not properly maintain a plant in India, resulting in a toxic chemical leak and high fatality rate. “They disappeared, and stockholders took a major hit,” said Michaels. 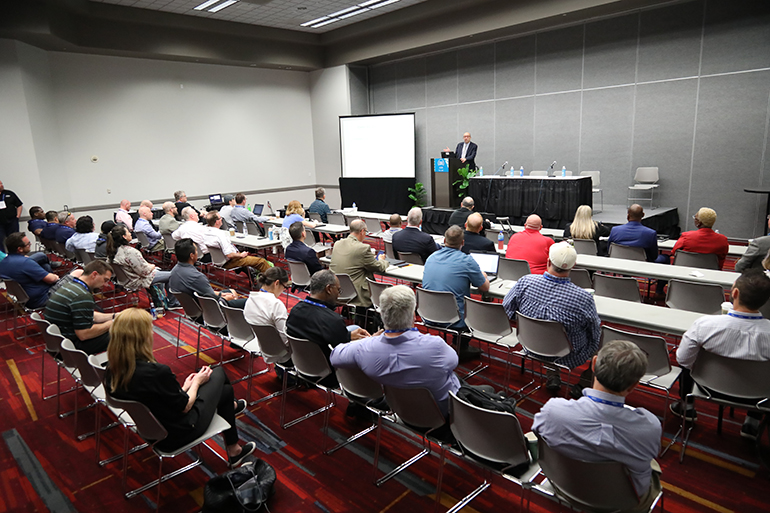 While OSHA expects employers to take responsibility for enforcing workplace safety, the agency does inspections and issues citations and fines if it finds hazards. OSHA has distributed press releases, raising awareness when companies have been seriously negligent. And bad press can cost a company more than money.

Michaels pointed to a particularly high-profile case where a killer whale killed a trainer at Sea World. OSHA issued a citation, and Sea World went to court and lost. It paid a fine and had to agree not to put trainers in water with killer whales. The fine was fairly nominal, but the story swept across the country, and the publicity was damaging, he said.

While OSHA does not issue industry-specific standards, it can lead callers to existing ones like ANSI. The agency also will put together compliance guidelines. “It’s worth thinking about [having guidelines made up] if there are things you think should be shared across your industry,” he said.

A panel of independent haulers shared their experiences trying to keep their workers safe and what they have had to consider for success.

Presenters told of serious injuries their workers have sustained, and another told of the worst possible tragedy—a new employee was hit when he walked behind the truck, which hadn’t been braked. The truck rolled over him and killed him.

“You’ve got your home and work families and you really know how close you are to these people when this kind of thing happens,” said Curt Saffle of Dick’s Sanitation. “It’s so important to stay ahead of the curve so you don’t go through a bad accident again.” 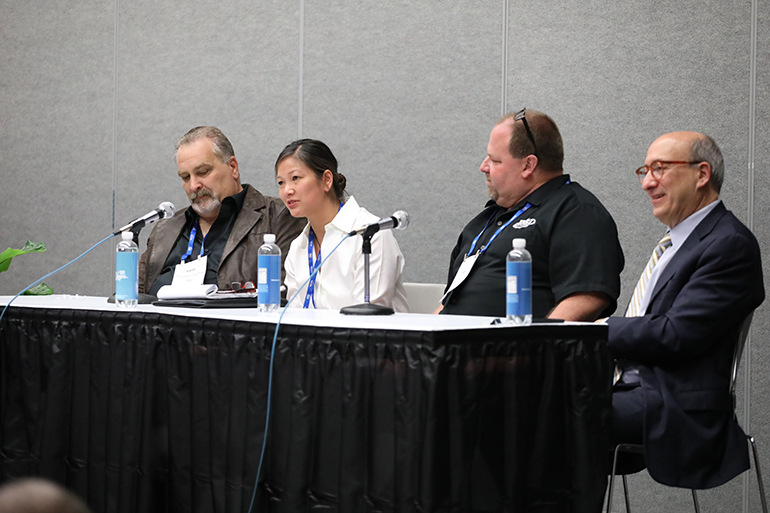 “The bigs like Republic and Waste Management already developed this stuff. You can use the same information if you have three trucks like we started or thousands,” he advised.

They broached questions like, “Do we want to spend on technology? And they talked about presenting top management with the math showing cameras and other safety products are worth the investment. They spoke of how to get employees to follow safety protocol.

“We try and spin it in a positive way when we talk about needing to follow the rules,” said Jane Dolezal of Homewood Disposal.

They discussed barriers in getting communities to work with them to keep their drivers safe. The general consensus was that when Slow Down to Get Around came out, they were not always successful in getting municipalities to work with them. But getting media support and leveraging social media helped raise awareness, as did building relationships with first responders.

In a presentation on the future of safety, panelists talked about switching to more automated technologies.

“We can’t do this [large scale] right away, but we’ve made progress to automate. Autonomous [trucks] will eventually be a great solution but it’s not going to come soon,” said Jim Olson of Republic.

For now, if he could, he said he would put everyone in the safety of a cab with automated collections. 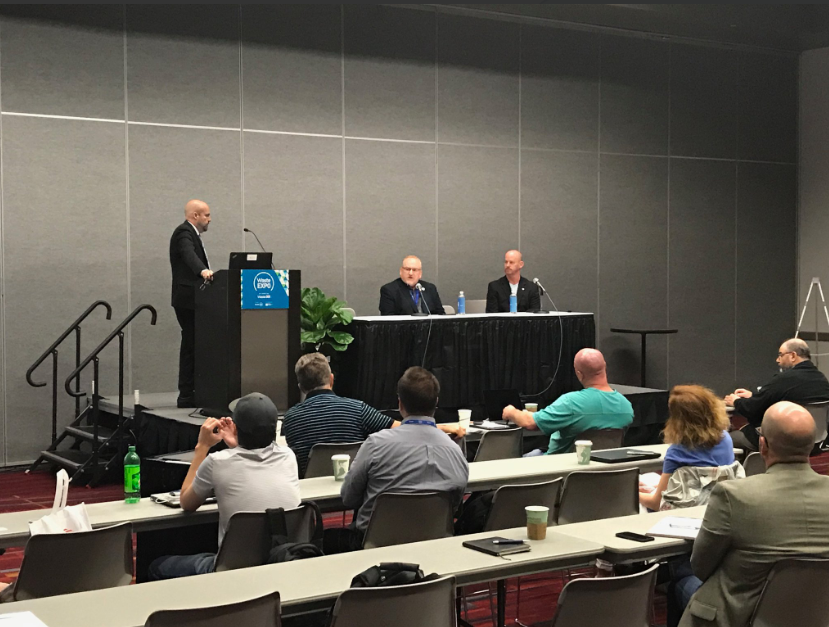 Another suggestion was to have phones configured to become disabled when a vehicle is in motion. The role of predictive modeling was broached, too.

“I don’t think a week passes I don’t have the opportunity to speak to colleagues, and that’s unique when you consider many of us are traded companies. But we set that aside if it comes to safety. We are trying to learn lessons to mitigate the likelihood of an accident happening again,” said Shawn Mandell of Waste Connections.

He spoke of sharing clips of events as learning tools and encouraged those in the room to submit their lessons learned to NWRA.

“It’s going to be tough to move the needle without predictive modeling. We need to share data,” said Mandell.

Brian Haney of LeadPoint spoke on safety in materials recovery facilities (MRFs), and he opened with startling but not surprising news: while 2016 saw the lowest injury rates in years, those rates are climbing—there was about a 50 percent increase from 2016 to 2017.

“MRF operators are contending with a labor shortage. They have to spend more to process commodities that are worth less. Issues like high turnover and product and quality pressure sometimes drive operations to sidestep safety, and if it’s not built into your company as a value, this will be an ongoing problem,” he said.

“You can have a lot of material stacked up and forklifts going back and forth. There should be no traffic pattern; forklift operators and bale inspectors should be the only people in the area. And don’t have heavy material on top of light,” he advised.

During screen cleaning, operators must be 100 percent in lockout/tagout and avoid failures.

“If you have doubt as to how tight your lockout program is, you have to walk through it. If you are going to do screen cleaning, watch. Do spot checks whenever you have the opportunity,” he suggested.

"A lot of facilities have guarding built into their system, but MRFs change and guards get loose or people don’t put them back on. Walk through and make sure guards are on, and, in general, you are set up for safety," he said.

Douglas Castro of Global ERA discussed training and how to sell safety to employees.

“Treat training like marketing and advertising. It’s got to be educational, engaging and entertaining to get buy in,” he said.

He suggested team-building activities, working with local news outlets and putting employee safety messages on trucks. Videos are powerful and can be made easily and inexpensively, so leverage them, too, he said. He suggested installing screens and playing videos in break rooms, maybe of employee interviews or shots taken from inside trucks.

Tom Jacques of Waste Management discussed regulations, including changes that are under consideration.

Currently, if drivers are within a certain radius of their terminal and on duty less than 12 hours, they aren’t required to use an electronic logging device (ELD). Industry members are trying to raise that threshold to 14 hours, also extending time they can go without a break. The thought of proponents of the extended hours is drivers would be less restricted if they got delayed.

The amendment has been received by the Federal Motor Carrier Safety Administration (FMCSA). And the industry hopes to hear a decision before July. Jacques advised attendees to become actively involved in policy.

“Work with American Trucking Associations and state motor associations to get valuable information and to be able to voice your opinion about a change that affects you,” he said.

He suggested making contacts at the Commercial Vehicle Safety Alliance to meet key players around regulations. “Work with others to understand the direction that regulations are going. Team up and make your voice heard,” said Jacques.

Jim Mullen of FMCSA provided updates on a few other rules, including the Drug and Alcohol Clearinghouse rule, which, among provisions, will require FMCSA-regulated employers to report information related to violations of FMCSA’s drug and alcohol testing regulations by employees. It will go into effect in 2020. 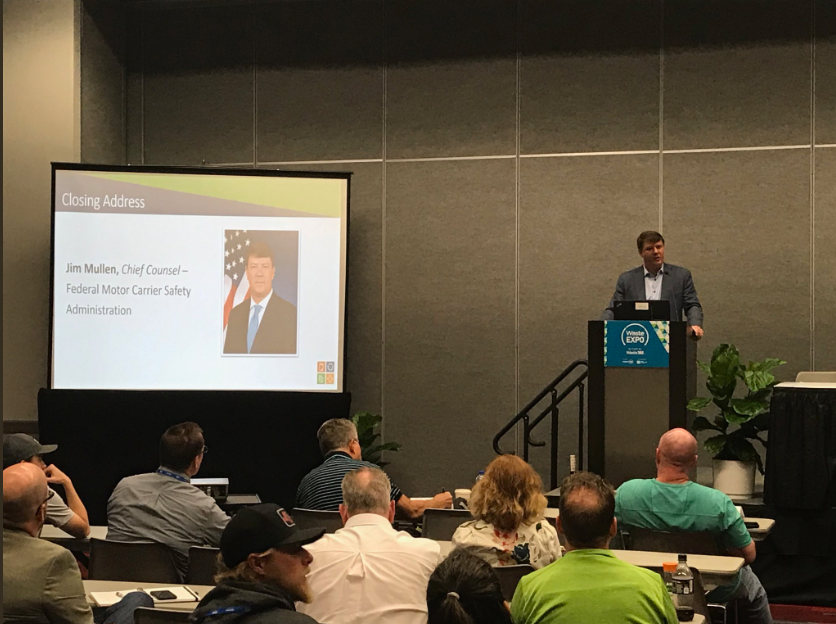 The Entry Level Driver Training rule was slated to go into effect next year but will not hit target. In closing, Mullen called on attendees to continue collaborating with government.

“We read your comments, and some of them are incorporated into the final rules. It is critical that the industry continue to engage with FMCSA,” he emphasized.