Getting Together for the Future of Fleet Safety: Part One 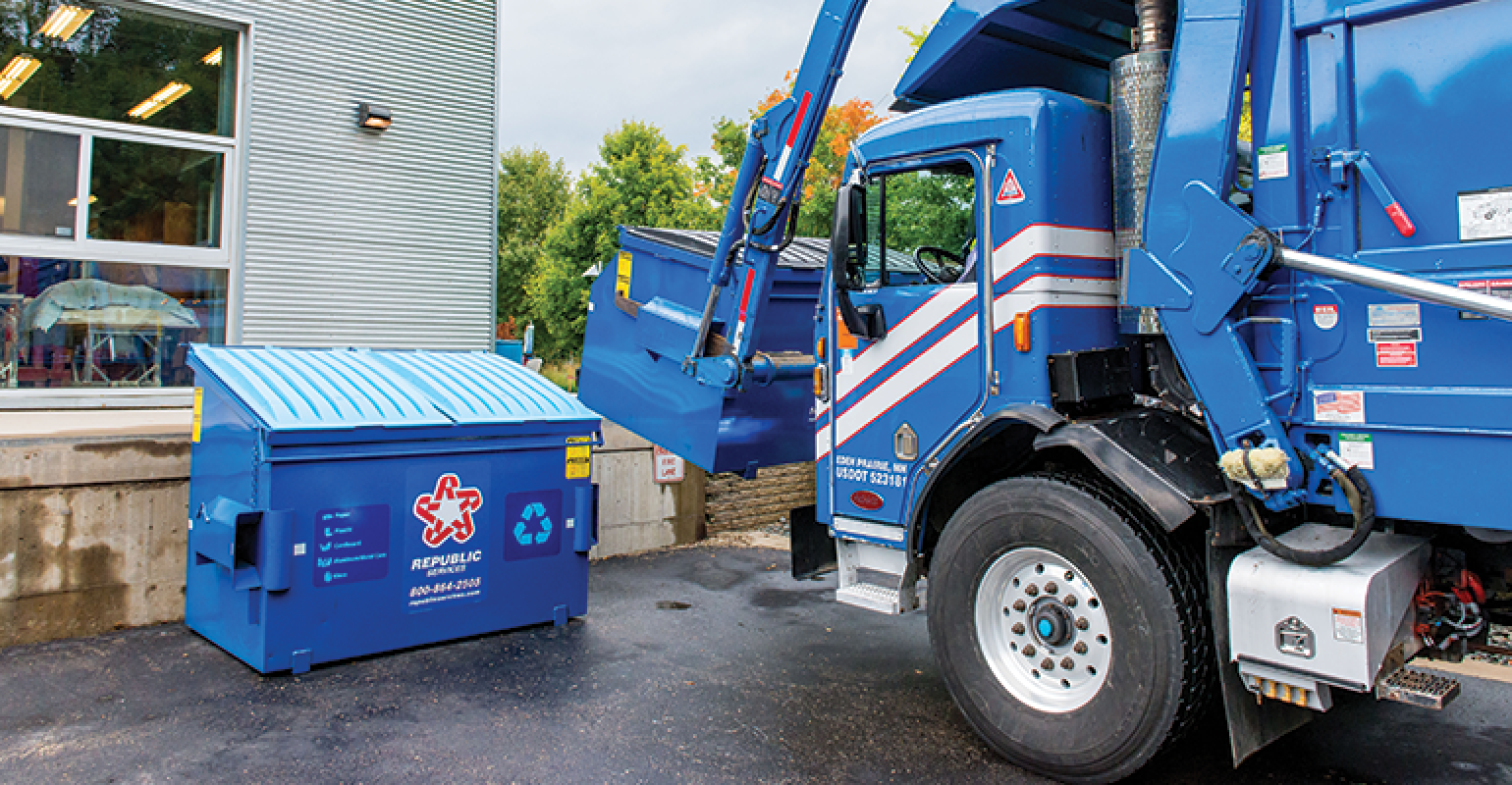 The organization's latest project deemed Truck of the Future focuses on driver visibility as a part of its members' original commitments to the Stockholm Declaration and reaffirmation of the United Nations' Decade of Action for Road Safety, which was enacted in 2010. The goal is to "partner with innovative startups with a focus on commercially viable emerging technology solutions scalable in-market." The new initiative has the waste and recycling industry at the forefront when it comes to fleet safety considerations.

Related: Getting Together for the Future of Fleet Safety: Part Two - Republic Services

"We think that there's a lot of appetite and great corporate intent in the waste and recycling community, and we want to be a part of helping that industry to be successful," Braunstein indicated. "As operators with some of the largest vehicles on the roads that are out there day in and day out, we know it's a tall order to run a responsible and safe operation."

As part of the project, a solution provider will be selected during a virtual, international pitch day on Dec. 2, 2020. The chosen solution will be piloted in the U.S. and an international market in 2021. The ultimate endgame for TSR and its partners is to "create scalable and lasting change" in the battle to halve road fatalities by 2030.

In a three-part series, Waste360 discusses the intersection of road safety and technology with Braunstein and member companies Republic Services and Anheuser Busch InBev.

Waste360: What challenges or issues are drivers currently facing?

David Braunstein: One of the issues that we still see challenges with are vehicle designs that impact all of us on the roads in terms of the way that we operate vehicles safely. So, visibility is a major challenge with many vehicle designs. While it is often attributed to driver behavior, many crashes can be attributed to poor vehicle designs. And that cuts across both commercial and consumer vehicles, passenger vehicles, so that's one of the challenges that TSR is trying to help solve, both in the short term. In the intermediate term, we would like to help identify better interventions and accelerate those interventions for overcoming vehicle shortcomings. We know that blind spots are still an issue for commercial and system drivers. So that's one issue that we talk a lot about as a coalition. And that was the reason that we initiated this most recent challenge.

One of the other issues that we care a lot about is the role of road users. The vast majority of deaths are in many cases, depending on the region of the world, you're talking about are pedestrian cyclists and others using powered two wheelers, scooters and the like. And so that's the challenge that needs to be addressed as well. So, we don't just need to protect vehicle occupants, but we need to protect vulnerable road users as well and make our cities and road systems more friendly to alternative modes of transportation that don't involve large vehicles.

Waste360: What innovations or technology have helped so far? What are the hurdles to making a new technology standard?

Braunstein: You can start with passive safety systems, for example - so just thinking about vehicle occupants for a moment, which is an important part of road safety even though normal road users are equally important. Just think about airbags and seatbelts. Previously, they made a tremendous impact on fatalities and injuries over the last 40 or 50 years. We started to see the advent of advanced driver assistance systems and things that improve the vehicle's ability to brake more appropriately. You're starting to see the adoption of Lane Keeping Assist Systems, and those sorts of technologies are coming to market. Now, those are not passive. Those are the active systems, and those are starting to show some very good signs of improving road safety for all road users.

We are keeping our eye on those both, but when it comes to what we see as being the next level for commercial road users, I think we're looking at vision and sensing systems that are retrofittable. Because the reality is that many vehicles are out there, they're on the road for quite a long time. Operators of those vehicles are not buying new vehicles all the time. So, we need to find a suitable solution. Making them standard, I think, is important because that affects the purchases of new vehicles going forward, but it does not help the vast majority of vehicle legacy vehicles that are on the road. So our emphasis, especially in our Truck of the Future program is to find retrofittable solutions that upgrade vehicles with advanced sensing systems just like the ones that we're now becoming familiar with in new vehicles.

Waste360: How was the Truck of the Future project developed and how were all the players gathered?

Braunstein: Truck of the Future is a concept that was born of member initiative - members including Anheuser Busch InBev, Republic Services, PepsiCo and UPS and some of our collaborators like the New York City Fleet Management Team that operates a fleet of 30,000 vehicles for New York City. They agreed that there are still some gaps that are out there that are affecting fleet operators across industries. And so we as TSR, became the convener for this new Truck of the Future initiative. And the way that they're involved, essentially, is we went through an ideation process with them using design thinking, and we allowed them to talk about the challenges that are still out there. We covered a lot of ground when it comes to vehicle design and vehicle shortcomings and driver needs especially. When you look at it from the standpoint of effort versus impact, one of the things that they all agreed upon was that new sensing systems are still potentially out there to improve the visibility of drivers. So, that's how we concluded that our first sprint for Truck of the Future, because there will be others, would focus on sensing systems that improve visibility for drivers. And so it's all driver-focused operator focused ideation. Now we're in the process of trying to source some innovative companies that have those sensing solutions that we can test.

Waste360: What criteria will be considered?

Braunstein: That would be a part of the evaluation process. The steering committee, which again includes PepsiCo, UPS and Anheuser Busch InBev, are going to be helping us to decide which solutions are most feasible. And one of the criteria I think they would be using would be the acceptability and the training requirements for drivers.

Cost is certainly a consideration because beyond our fleet operators that are part of our community, we would like to find solutions that can be cost-effectively deployed by any fleet. Our fleet operators are some of the largest in the world, but we want this to impact as many fleets as possible. So cost-effectiveness is one aspect of it. We're also looking for solutions that are on the cutting edge, but not so bleeding edge that they can't be implemented at scale. So what we're looking for is an interesting balance: we want innovative but not so innovative that it wouldn't be able to scale in reasonably short order. We have to find that balance of innovation and scalability. And then I would say another criterion that we would be using is global reach. We want to partner with startups and have the ability to go into markets where these kinds of solutions are certainly needed as much as they are in North America.

Waste360: Can you tell me a little bit more about TSR's 2030 agenda and how this project is going to help progress it?

Braunstein: The 2030 agenda has several places where road safety is called out. One of them is in cities' "healthy cities" area, and then there's just health and wellness. The 2030 agenda counts on public-private partnerships in order to advance the agenda. That's where we see Truck of the Future fitting in: helping us to achieve the goal of halving road fatalities within the next 10 years, which is a tall order. It was also the goal with the original call to action. But I think we've learned a lot as the road safety community, and I think we have a better chance now than ever to go after that. And making vehicles safer is certainly a big component of achieving the 2030 agenda.

Waste360: With the COVID-19 pandemic, we witnessed roadway fatalities go up despite the number of hours spent on the road decreases. What opportunities do these innovations present to keep everybody safe on the roads at all times?

Braunstein: There isn't one silver bullet, right? When you think about what has happened through the pandemic - even though volumes were down, vehicle miles traveled were down, risky driving behaviors actually went up. And one of the risky driving behaviors that we are not addressing, in this case, is speeding. But one of the things that we will be addressing is visibility. So, I think that it's important to tackle all of these things simultaneously, in order to get the optimal outcome, which is dramatically reducing serious injuries and fatalities. But you can't just have one solution to the problem. We need better roads, infrastructure and we need better policies that discourage speeding on the roads. We need better-separated infrastructure that helps large vehicles to not have incursions with lower road users. All of those things go into a successful, safer road system. We are just taking a lead in that one aspect, which is visibility, which we believe is a large contributing factor. But it's not the only factor. So I think we as a member of the road safety community are supportive of the other efforts as well.

Other stories in this series: