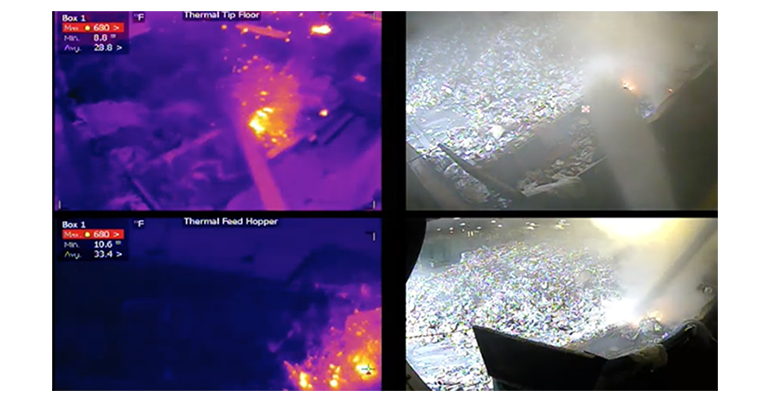 The number of reported waste and recycling facility fires that occurred in the U.S. and Canada in December 2019 totaled 24 fire incidents. 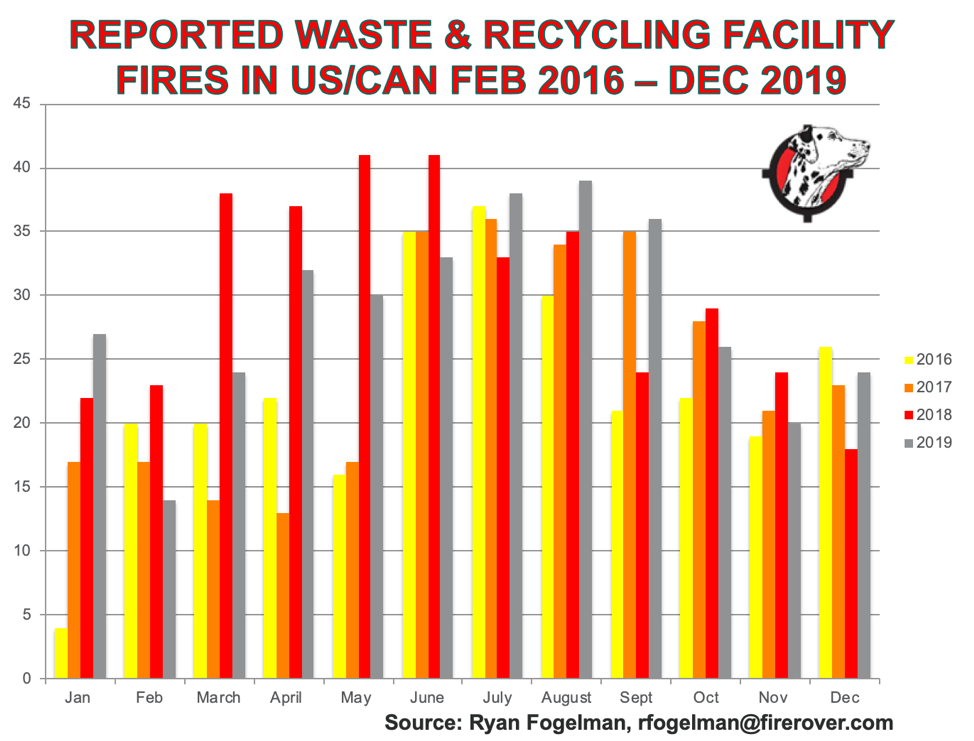 During 2019, the waste and recycling industry experienced 343 reported facility fires in the U.S. and Canada. Based on reasonable assumptions, we can extrapolate that 1,800-plus facility ﬁres occurred during that time, which, based on the number of facilities reported by the Environmental Research & Education Foundation, is more than 40 percent of the industry. I define “reported facility fires” as any fire that has been reported by the media that occurs at a waste or recycling facility in the U.S. and Canada. Typically, the fires that are reported by the media are larger fires that require fire professionals to arrive on scene and where there are affects that the public can witness.

Unfortunately, 2019 was also a record year for reported injuries of 49 and two deaths that can be directly or indirectly attributed to these fire incidents. As we head into 2020, I am spending a significant amount of time developing the “2020 Waste & Recycling Facility Fire Annual Report” consolidating 2019’s data and analyzing trends in order to understand the true scope of the fire risks we face as an industry.

Overall, I am very proud of the industry for its focus on mitigating the risks of these fires. I see firsthand that both companies and our associations industrywide are focusing initiatives on dealing with these risks, including developing fire protection plans, investing in technology and equipment and better incident tracking, to name a few. To give a taste of what is to come in the report, I have provided the following initial data: 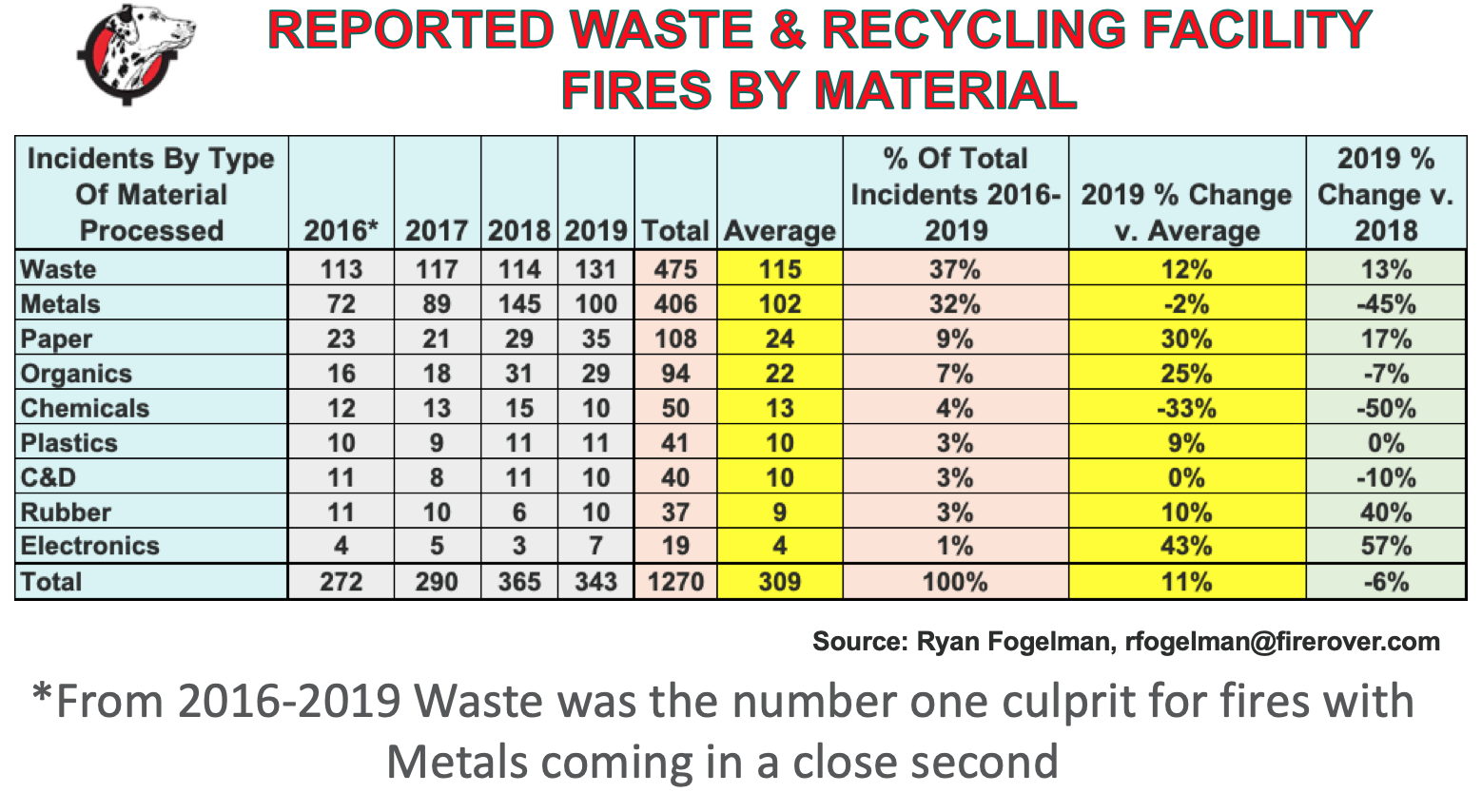 In 2019, fires in waste facilities were up 13 percent over 2018 and 12 percent over the three-year average from 2016 to 2018. We also saw large percentage increases in paper—17 percent over 2018 numbers and 30 percent above the 2016 to 2018 numbers. Rubber, which had fallen in 2018, was back to typical levels. And electronics recycling, which has seen an increasing footprint due to the need for these series, was up from years prior. My guess is that we are going to see these fires increase as the capacity for these services continue to grow. These fire increases are due heavily to the continued influx of lithium-ion batteries into our waste and recycling streams.

Fortunately, metals fires, which still account for almost a third of total fire incidents over the past four years, were down 45 percent from 2018 and down 2 percent over the average of 2016 to 2018. We hope that 2018 was an aberration for the metal recyclers, but only time will tell. Chemicals were down in 2019, which is good news as their fires tend to be major.

If you had time to read last month’s article, I focused on a core tenant that “Safety should not know competition.” There are certain partners that I have worked with over the years, but no one lives by this tenant better than Michael Csapo, the general manager of the Resource Recovery and Recycling Authority of Southwest Oakland County (RRRASOC), Mich.

I had the pleasure of asking him some questions that I feel provide a unique perspective on how to successfully set up and manage an ongoing public-private partnership between a municipality and its service provider, especially when dealing with the safety challenges we see in the waste and recycling streams.

Ryan Fogelman: What are the unique differences of developing safety programs when operating a public-private partnership?

Michael Csapo: One of the keys to establishing a successful public-private partnership is recognizing where the values and goals of the two entities are aligned and where those values and goals may differ and then crafting a relationship that allows both parties to have their values and goals operationalized to the greatest extent possible. For the most part, I’ve found that safety is one of those areas in which values and goals are often closely aligned. It’s rare, or at least it should be, that an entity wouldn’t have the health, safety and welfare of its employees, partners, customers and first responders among its highest values. As such, it's generally easy to agree that developing and deploying thoughtful safety programs is essential.

Ryan Fogelman: How are you dealing with the increase in lithium-ion in your waste and recycling streams?

Michael Csapo: Dealing with contamination in the recycling stream is a widespread and ongoing challenge in the recycling industry for a variety of reasons. However, batteries, and lithium-ion batteries in particular, present a particularly crucial challenge because of their ability to serve as an ignition source to the large amounts of combustible material that we process. Dealing with them is essentially a three-part approach.

First is engaging in public education about what can and cannot be recycled and emphasizing the problems that can be created when folks put the wrong things into their recycling carts or bins. It is important for people to understand that contamination in the recycling stream doesn't just reduce our efficiency, increase our costs and create maintenance problems, but it can create dangerous situations, such as when a lithium battery creates a fire on the tip floor or in the infeed hopper. Complementing this educational effort is establishing programs such as household hazardous waste collections, so folks are not only made aware that their batteries shouldn’t go into their recycling carts, but they are given safe and effective alternatives to recycle and/or dispose of those items that don’t belong with the curbside recycling.

The second component of the approach is employee training and operational diligence. It is critical to ensure that frontline staff are vigilant and continually watching for those problematic materials, such as batteries and propane tanks, and safely capturing them at every opportunity. In an industry that has relatively high employee turnover, constant training and retraining is ever present.

Finally, ensuring that there are systems in place to deal with fire threats as they arise are necessary. Those systems fall on a spectrum, including onsite employee responses, third-party monitoring and response systems like Fire Rover (a well-maintained building fire suppression and alarm system) and a well-trained and responsive local fire department.

Ryan Fogelman: When focusing on public education, have you had success with your programs? An example would be targeting zones that have high violations.

Michael Csapo: Public education can be complicated because the material that is processed at our MRF [materials recovery facility] comes not just from the authority but also from communities outside of our nine member communities. With Republic Services as our operator, outside material may come from their own organic curbside routes or from third-party haulers with whom they have arrangements for material processing. While we can control the education and messaging within our own borders, public education beyond our borders requires the cooperation and commitment of a variety of haulers, their customers and other stakeholders for whom both recycling and safety is important. In that environment, ensuring accuracy and consistency can be difficult. In some cases, we’ve had to pressure communities and haulers into updating and improving upon the ways they educate homeowners. We’ve found instances of legacy information still being available from an old curbside, multi-sort system that allowed batteries in the curbside bin. While that was never a very good idea in the first place, in this era of single stream recycling with cart collection, there is no way for the curbside drivers to identify and capture those batteries, and residents should not be able to access information that indicates that batteries are allowed.

We’ve also just completed a broad curbside observation program within our communities that is designed to quantify and qualify what is happening at the curb within our communities at the neighborhood level. The data from that effort should help inform our outreach and education efforts and allow us to be more targeted and cost effective with our message of “Recycle More, Recycle Right.”

As we head into the new decade, I look forward to continuing our individual and industrywide efforts to solve the fire problems we face. The “2019 Waste & Recycling Facility Fire Annual Report” will be available later this month, which I hope will help in these efforts. If you have any insight or information that should be included, please do not hesitate to reach out to me directly. 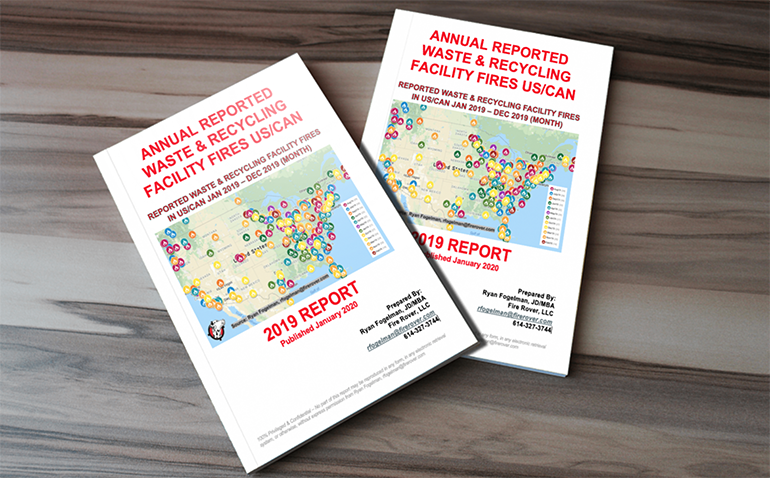