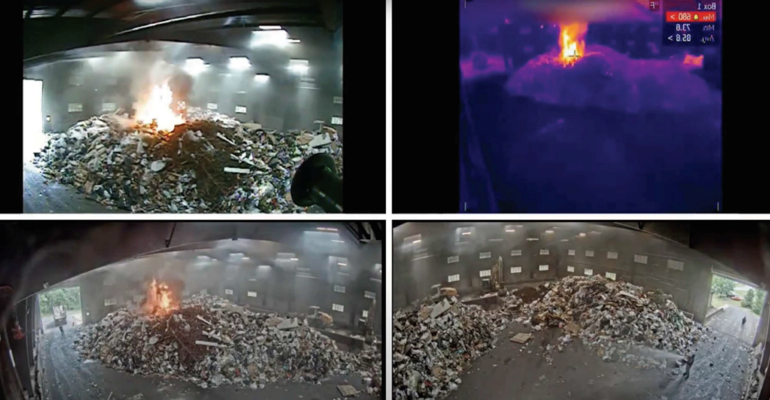 The past two months have been the worst on record since I began reporting waste and recycling facility fire incidents in 2016. In March, we incurred 31 reported fire incidents, which is still below the lithium-ion battery wave we faced in 2018, but in April, we incurred 45 waste and recycling facility fires in the U.S. and Canada. This was the worst month ever recorded, far surpassing May and June 2018 where we encountered 41 incidents each month. To put this into perspective, in March and April 2020, we only faced 43 total fires compared to this year’s same period of 76. This number far surpassed the average number of fires in March and April of 48.5 fires incidents for the past five years. 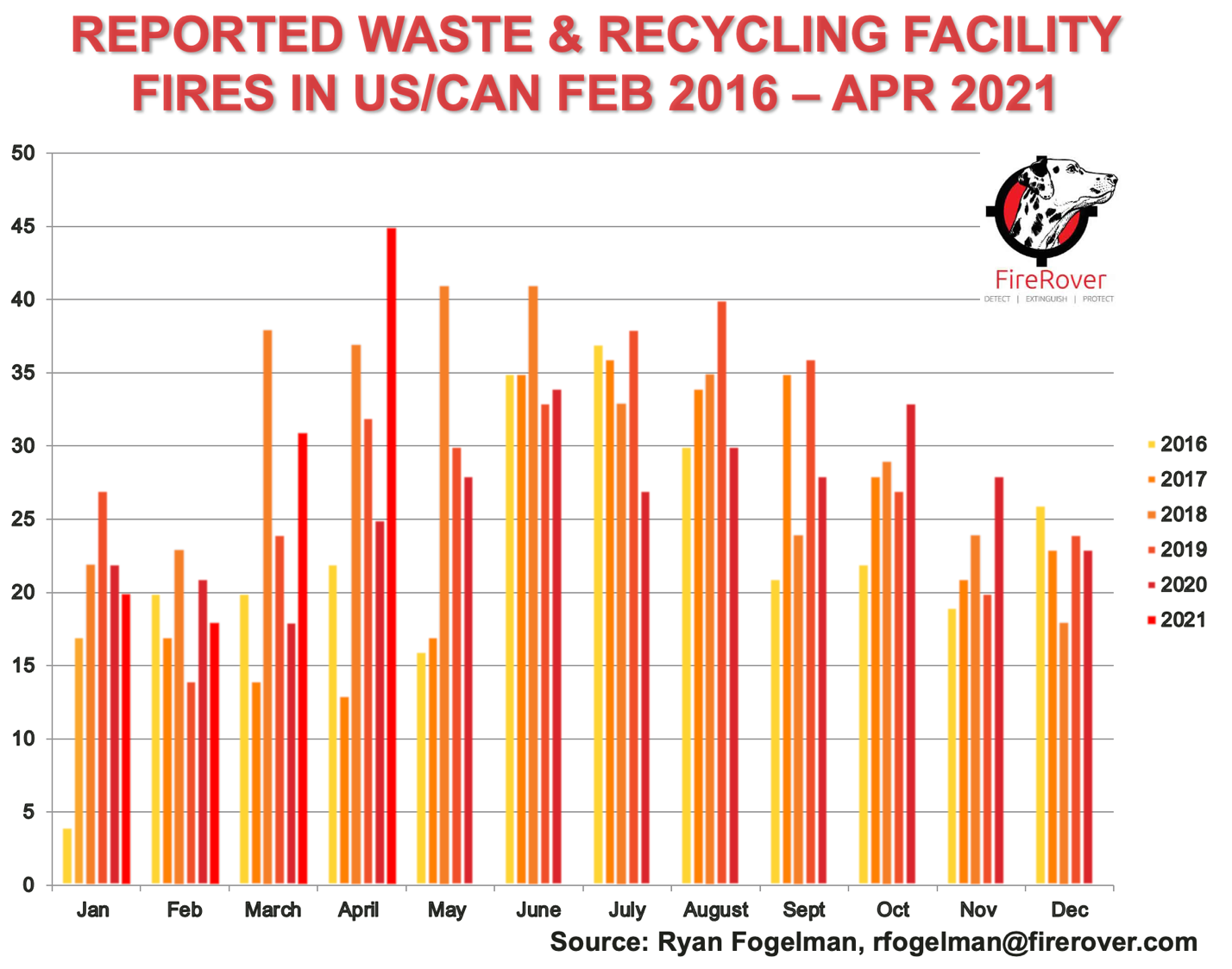 Is this just happening in the U.S. and Canada? From my research, I have seen an increase in fire incidents across the globe. Although it is purely anecdotal at this point, the fires in the UK were in full effect for the month of April—three large fires occurred just days apart.

Let’s take a look at some possible factors that led to this spike in fire incidents.

Was there a particular sector driving the increase in fire incidents? 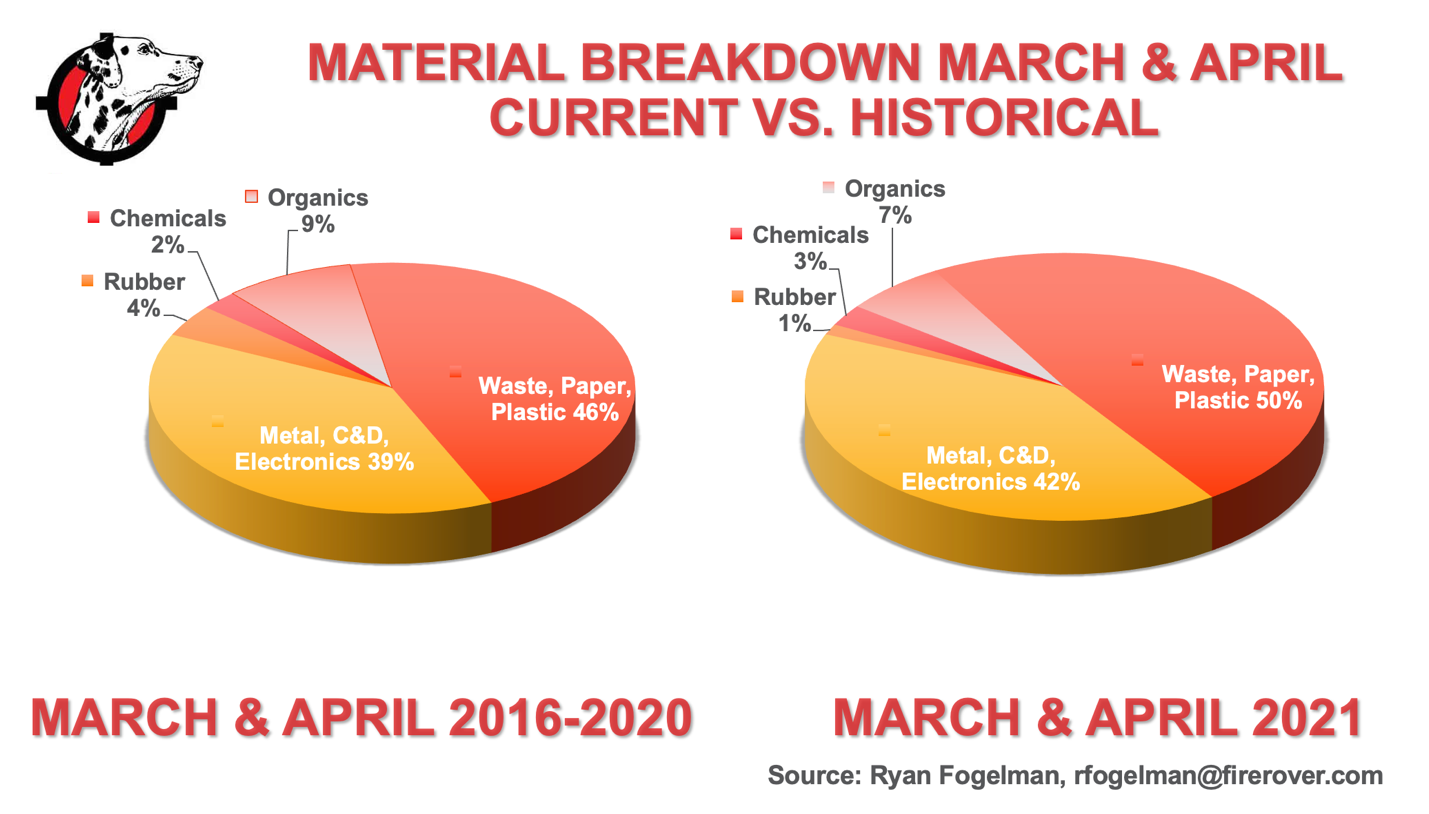 There have been times in the past where certain materials made up a large percentage of fire incidents and skewed the numbers higher. In the chart above, I broke out the materials for historical March and April versus this year’s timeframe. It is pretty clear that we are seeing materials close to their historical norms, give or take a few percentage points.

Was the increase in fire incidences due to heat?

We have found that increased heat is typically the cause of our historic “summertime spike.” According to a report from Climate.gov, the National Centers for Environmental Information’s latest U.S. monthly climate summary stated the average temperature for March 2021 was 4 degrees warmer than the 20th century average. A recent report by the National Oceanic and Atmospheric Administration also revealed that weather across the U.S. is warming. Specifically, "the Arctic is among the fastest warming regions in the world and is heating at twice the global average," according to the World Meteorological Organization. Heat is not just a direct cause, but the data shows that it certainly exacerbates the problem.

How are the Fire Rover customers faring during this time?

I began sharing the Fire Rover “saves” last year, and in March, I reported that we eliminated 34 fires in the first quarter of this year. In April, we responded to 74 fire incidents at our clients’ facilities. This higher number is partially due to the increase in fire incidents that began in March and continued to plague our industry through April. Our past definition of a “save” only included instances where there was a formal fire response or a “pressurization event” of our units. Due to some changes in our reporting, it is now feasible for us to have reliable data that includes all events where a hazard was responded to as compared to a false alarm. Moving forward, I will be following this more accurate approach, while keeping in mind that, in theory, fires are not the issue, and the severity of a fire is critical. 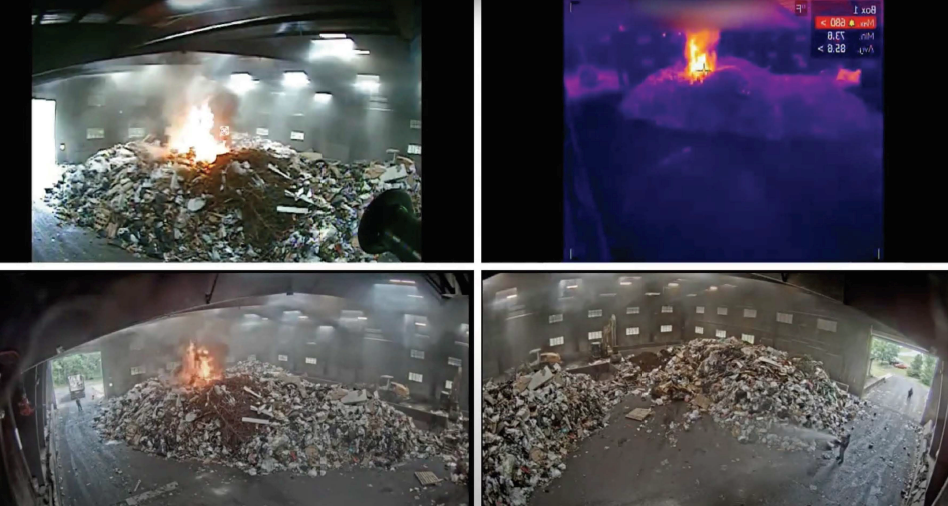 Take a look at this video of a fire incident that occurred in late April at one of our Client’s operations.  A deep-seated fire began in one of their MSW piles on their tip floor.  We were able to provide our Client a positive outcome with our quick identification through our smoke analytics, rapid contacting of the fire department and remotely operated and application of our environmentally friendly cooling agent directly to the fire.  Imagine what would have happened if there was a delay in contacting the fire department or worst yet, there was not 1000+ gallons of our encapsulator applied while the authorities were traveling to the site.  This positive outcome could have taken an extremely negative turn rather quickly.

Our waste and recycling operators are the victims. 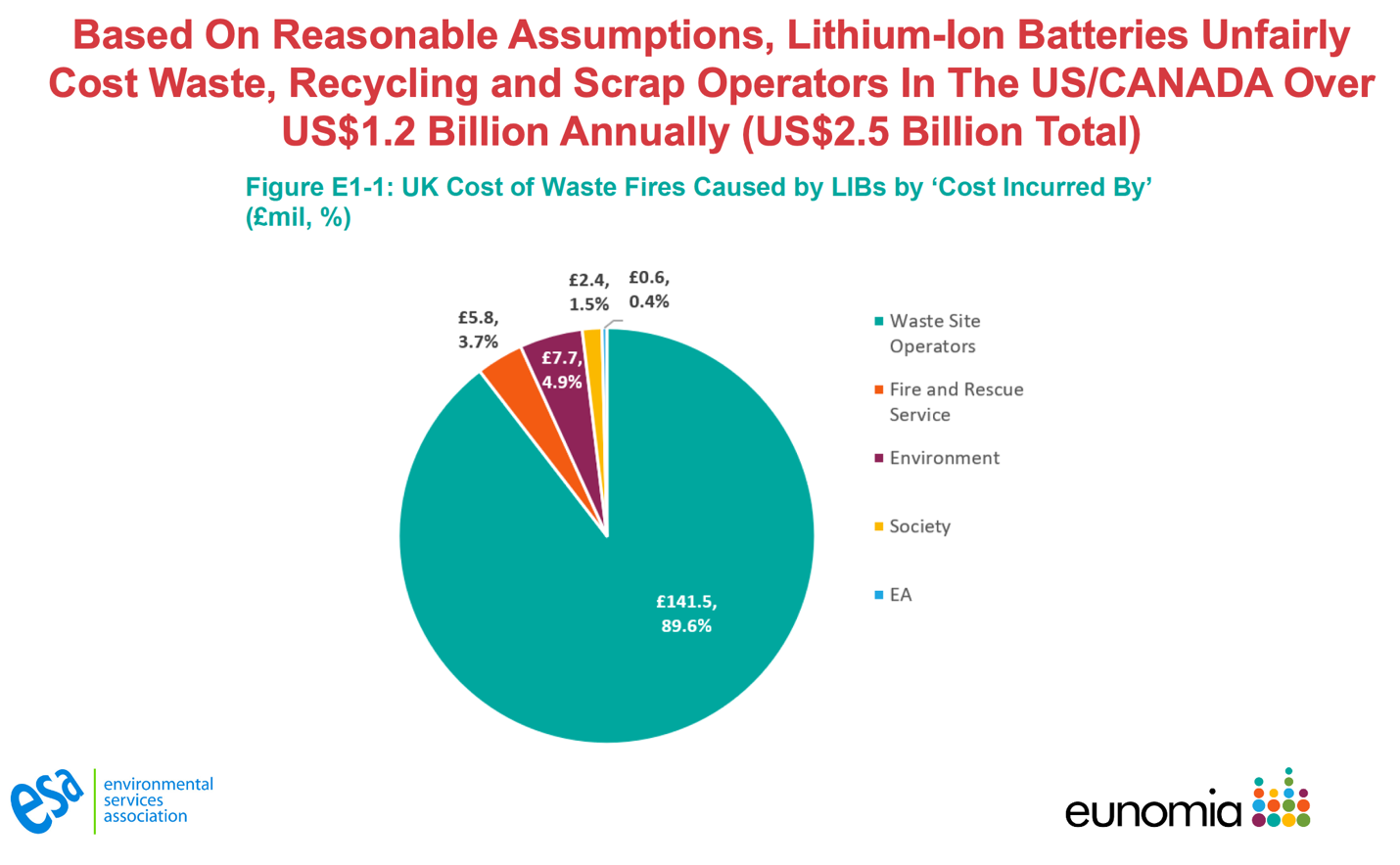 I am sure that I have shared this before, and I certainly do not want to make our operators appear weak, but it is a fact that waste and recycling operators are the victims when it comes to a number of the hazards they deal with on a daily basis, including the surge of lithium-ion batteries in our waste and recycling streams. This ideation of “victim” is a purely economic rational. When you take a macro view of the battery supply chain, there are so many beneficiaries from a profit, productivity and enjoyment of life perspective. The only real costs of the downside fall squarely on our industry. Lithium-ion batteries conservatively cost our industry in the U.S. and Canada $1.2 billion dollars annually. It is time that we demand that the battery manufacturers pay their fair share of the $1.2 billion dollars in costs our industry’s operators and fire professionals have up to this point been unfairly burdened with.

Where do we go from here?

Education: The most important way to prevent fires is to prevent the wrong materials from getting into the waste and recycling stream in the first place. It has become extremely apparent from my view of the world that most regulations being pushed by governments and associations are seeking funding for more education programs. I am all for education, but we have to consider the following limitations of this approach:

In 2019, Covanta conducted a survey of 2,000 Americans, revealing that although 22 percent of Americans “don’t have enough information regarding recycling,” 21 percent said they are simply “too lazy” to recycle. No matter how much we try to educate the problem away, the reality is that education is only one leg of the stool.

Training/Preparedness – It’s time to get back to basics. I’ve said it before, and I’ll say it again: good operators have less fire incidents than bad operators. The numbers show that we had less reported fire incidents in the two years since the lithium-ion battery wave hit our industry in 2018. I think we all can agree that we cannot really trust last year’s data since we were in the middle of a global pandemic. The number of incidents were down, but as I mentioned in the annual report, we need to see the next couple of years to truly understand how the pandemic year fits in to the story. Our operators have spent the past year rightfully focused on their employees’ safety amid COVID-19. But now, it is time to dust off the fire prevention plans, invite the fire professionals back to meet with your team and ensure that you’re following operational best practices such as the “Guide to Creating a Fire Prevention and Management Plan” developed by the Institute of Scrap Recycling Industries for its members.

Remember, we need to ensure the fire professionals also have the necessary tools and education to help fight any potential fire incidents at our facilities.

Technology – In combination with education and training/preparedness, it is time for industry to realize there is a solution to this problem. As I shared in my risk mitigation article a couple of months back, our customers who have developed operational best practices, in combination with having our early thermal detection and fire elimination solution in place, have less fire risks.

While we see the value in technology and proper waste management and recycling, we need to get the associations, government entities and lobbyists on the same page. The cost currently burdening the waste and recycling industry needs to be passed to the battery manufacturers of the world. This isn’t because they are the “bad guys;” it’s because they are providing the public what we’re demanding: more access to portable power.

This solution would allow all of the players in the supply chain to share the benefits and costs. For example, in the U.S. and Canada, we have about 5,000 facilities, according to the Environmental Research & Education Foundation, that face harm resulting from lithium-ion batteries specifically. These batteries cost the industry $1.2 billion dollars annually from fire incidents. That is $240,000 per site that we could invest in solutions like the Fire Rover that stop these fires in their tracks.

This approach is universally used in a number of industries. When states legalize gaming, they take a percentage to help those who become addicted. It’s time for the battery manufacturers to fund more than just those efforts that have the greatest visibility, without the greatest effect on safety, especially since this problem is far from going away. According to UBS estimates, over the next decade, energy storage costs will fall between 66 percent and 80 percent, and the market will grow to as much as $426 billion annually worldwide. This is a big problem that requires big solutions!

Ryan Fogelman, JD/MBA, is vice president of strategic partnerships for Fire Rover. He is focused on bringing innovative safety solutions to market, and two of his solutions have won the distinguished Edison Innovation Award for Industrial Safety and Consumer Products. He has been compiling and publishing the “Reported Waste & Recycling Facility Fires In The US/CAN” since February 2016 and the “Waste & Recycling Facility Fires Annual Report.” Fogelman speaks regularly on the topic of the scope of fire problems facing the waste and recycling industries, detection solutions, proper fire planning and early-stage fire risk mitigation. Additionally, Fogelman is on the National Fire Protection Association’s Technical Committee for Hazard Materials. (Connect with Ryan on LinkedIn at https://www.linkedin.com/in/ryanjayfogelman or email at [email protected])