April 2019 Updated Fire Report: A Sit Down with Ronald Butler, the Jedi Master of Lithium-ion Power

Fire Rover’s Ryan Fogelman sits down with the CEO of Energy Storage Safety Products International to discuss the specifics of lithium-ion batteries.

During the past 12 months, the waste and recycling industry has experienced 339 reported facility fires in both the U.S. and Canada. Based on reasonable assumptions, we can extrapolate that 1,800-plus facility ﬁres have occurred during that time, which, based on the number of facilities reported by the Environmental Research & Education Foundation, is more than 40 percent of the industry. 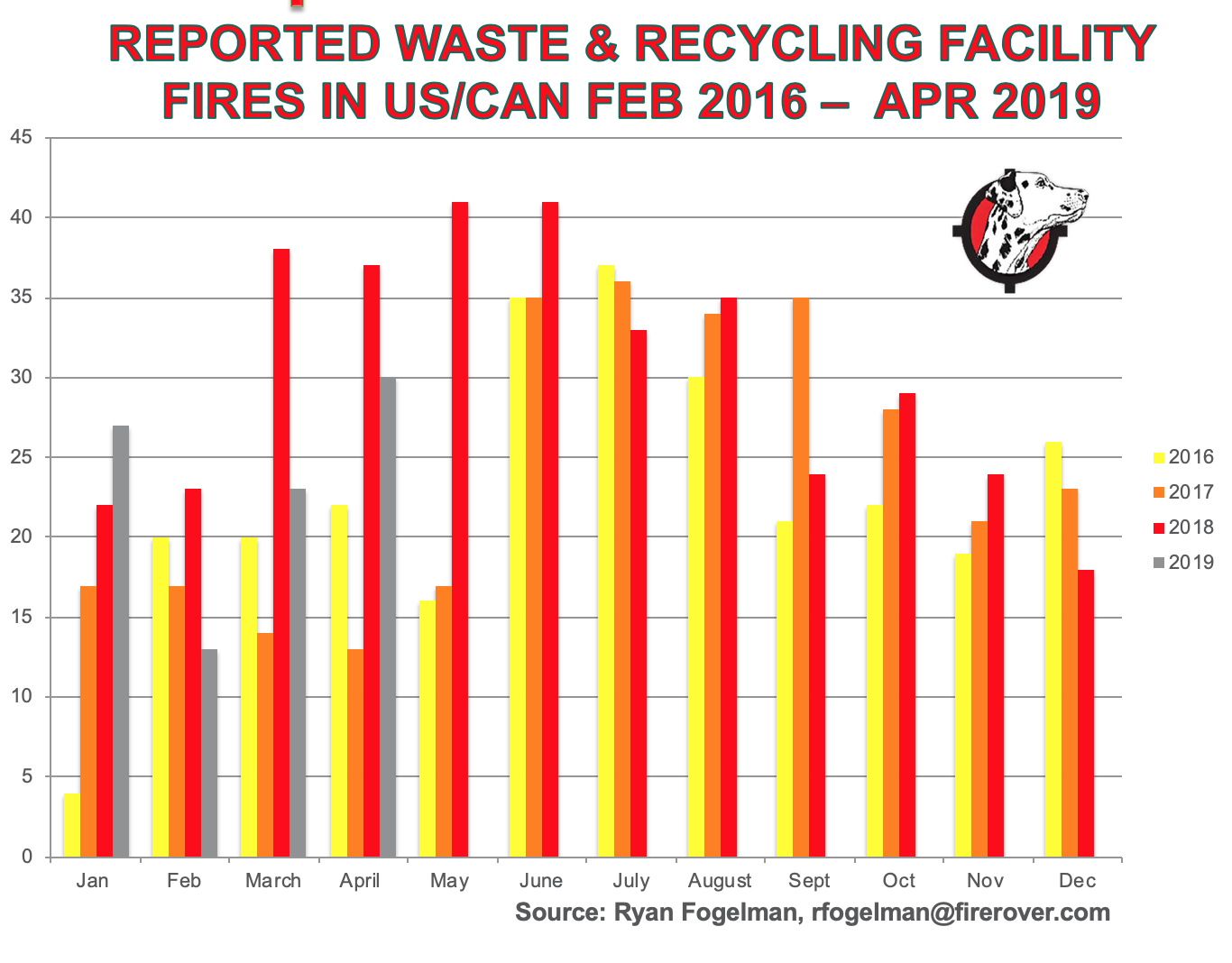 Although we are not experiencing the tremendous spike in fires we experienced in the first four months of 2018, the number of reported fire incidents are steadily increasing as we move toward the summer months of dry and hot weather.

The fire hazards I typically see in the waste and recycling industry range from traditional material hazards, such as pressurized tanks, equipment, chemicals, hot work activities, hazmat and smoking, to newer hazards like lithium-ion (li-ion) batteries. 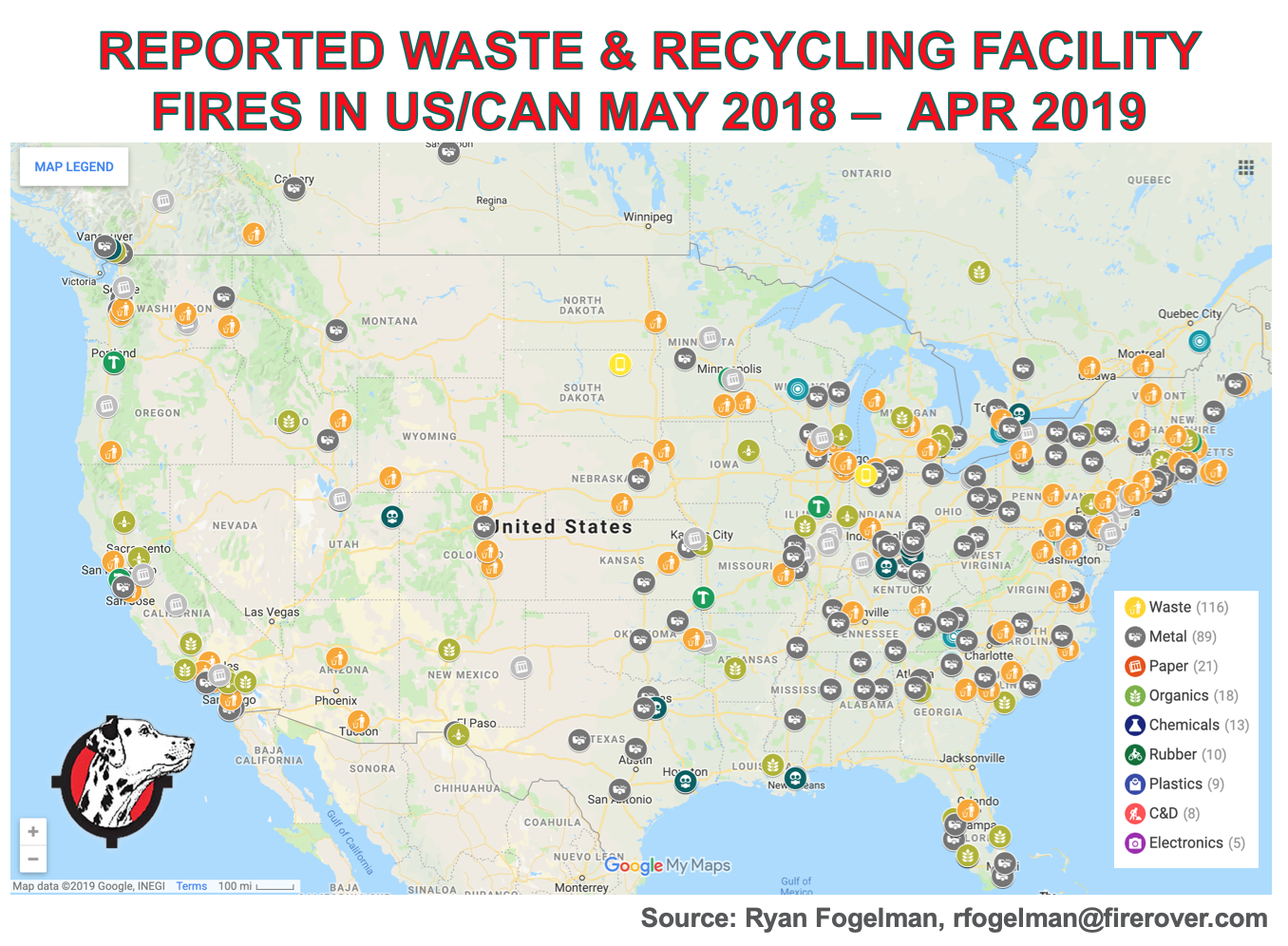 In the waste and recycling industry, we have a ton of fires caused by lithium-ion batteries that typically occur when we are shredding them, although a number occur in other parts of our transfer and processing. Although we discuss the issue from a fire perspective and the dangers of these batteries, our focus typically goes to which party is going to bear the burden of cost and responsibility of their recycling.

In my position with Fire Rover, I am lucky to be able to interact with experts from other industries that we protect unique from the waste and recycling industry. One of these experts, who his colleagues kindly refer to as the “Jedi Master of Lithium,” is Ronald Butler. He is the CEO of Energy Storage Safety Products International, a global expert in the lithium-ion lifecycle. His ultimate vision is to see a completely closed loop, protected supply chain that covers the entire lifecycle of the growing power source.

Ryan Fogelman: What is the difference between lithium batteries and lithium-ion batteries?

Ronald Butler: Lithium and lithium-ion batteries are different. Lithium batteries, or primary batteries, are single-use and incapable of recharge. They contain lithium metal, which is highly combustible. The real value in lithium lies in the fact that they deliver extremely high energy densities in small configurations. They are used where recharge isn’t necessary or feasible. Common applications include military use (warfighter applications), medical applications and certain consumer electronics, to name a few.

Ryan Fogelman: Are we seeing more incidents due to lithium-ion batteries versus their lithium counterparts?

Ronald Butler: Lithium batteries are capable of spontaneous ignition and subsequent explosion due to overheating. Overheating may be caused by electrical shorting, rapid discharge, overcharging, manufacturers defect, poor design or mechanical damage, among many other causes. Overheating results in a process called thermal runaway, which is a reaction within the battery causing internal temperature and pressure to rise at a quicker rate then can be dissipated. Once one battery cell goes into thermal runaway, it produces enough heat to cause adjacent battery cells to also go into thermal runaway. This produces a fire that repeatedly flares up as each battery cell in turn ruptures and releases its contents. The result is the release of flammable electrolyte from the battery and, in the case of disposable lithium batteries, the release of molten burning lithium. An enormous issue is that these fires can’t be treated like “normal” fires and require specific training, planning, storage and extinguishing interventions. 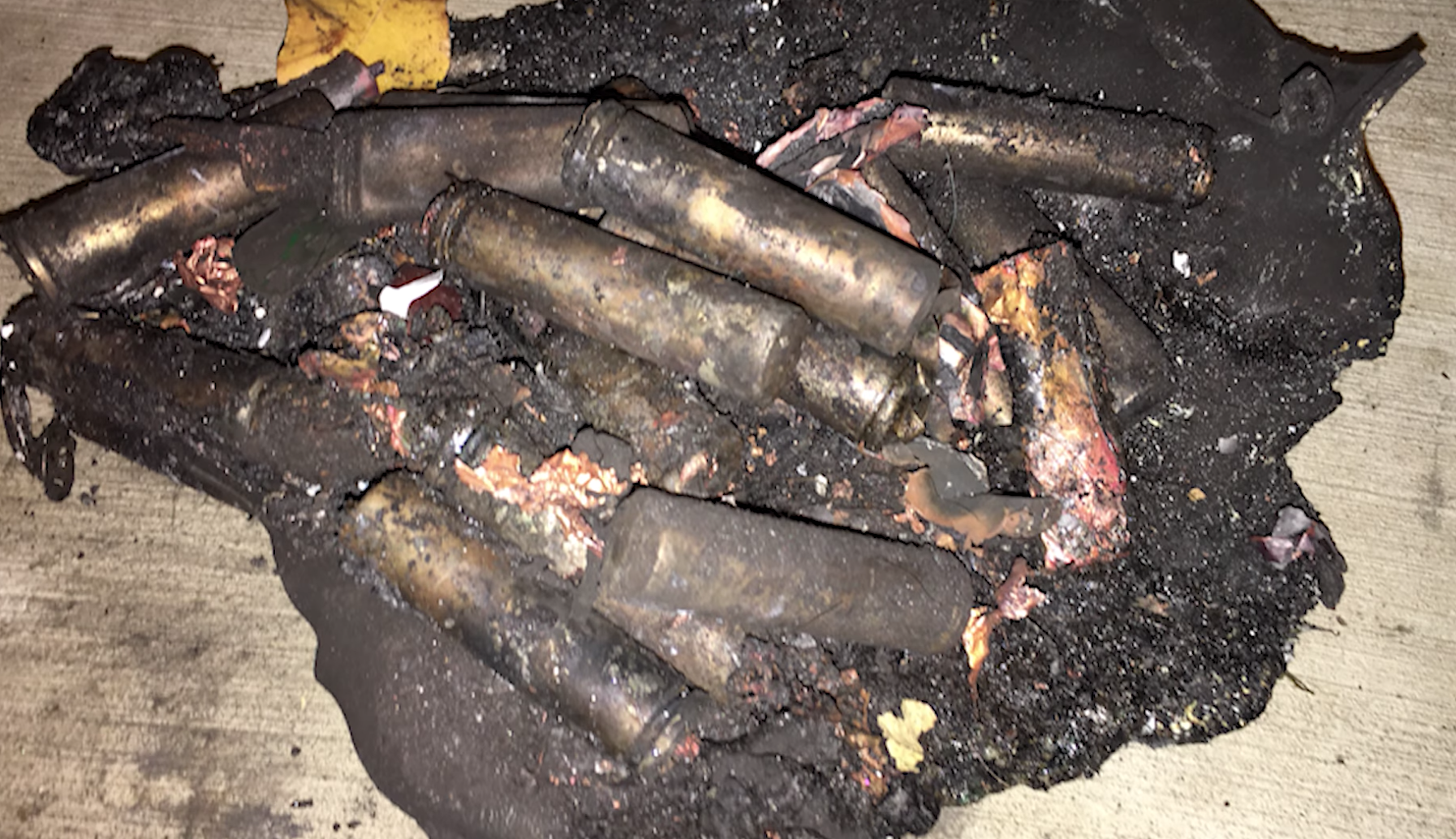 Ryan Fogelman: In the waste and recycling, we are usually the last ones in the supply chain to encounter these batteries. Can you give us an idea of the true scope of the power source?

Ronald Butler: Lithium-ion batteries are found in nearly every power requiring application. Airports see thousands of batteries go through their gates each day. Hospitals utilize battery power in more and more systems—from rechargeable gurneys to critical monitoring systems. Colleges and universities have them on campuses in huge amounts (i.e., laptops and smart devices). Lithium batteries are an integral part of everyday life now, with their use expected to explode as demand grows and manufacturing costs plummet. Their impact is enormous now, but what will their impact be a few short years from now?

Ryan Fogelman: Can you address the fire threat of these batteries specifically?

Ronald Butler: As the use of lithium batteries grows, so will the fire threat in the entire battery lifecycle. Manufacturers, shippers, warehousing, distributors, retailers and some end users will have to become more aware of the fire and safety hazards that accompany these powerful tools. Every stop of the battery supply chain is responsible for the safe storage and handling of the batteries.

Organizations that manufacture, ship and store lithium-ion batteries haven’t been immune to the fire incident. Thermal runaway events have contributed to a number of large-scale fires in facilities that contained stored lithium batteries. These fires are particularly high impact as they involve large volumes of batteries stored in configurations that encourage fire spread. 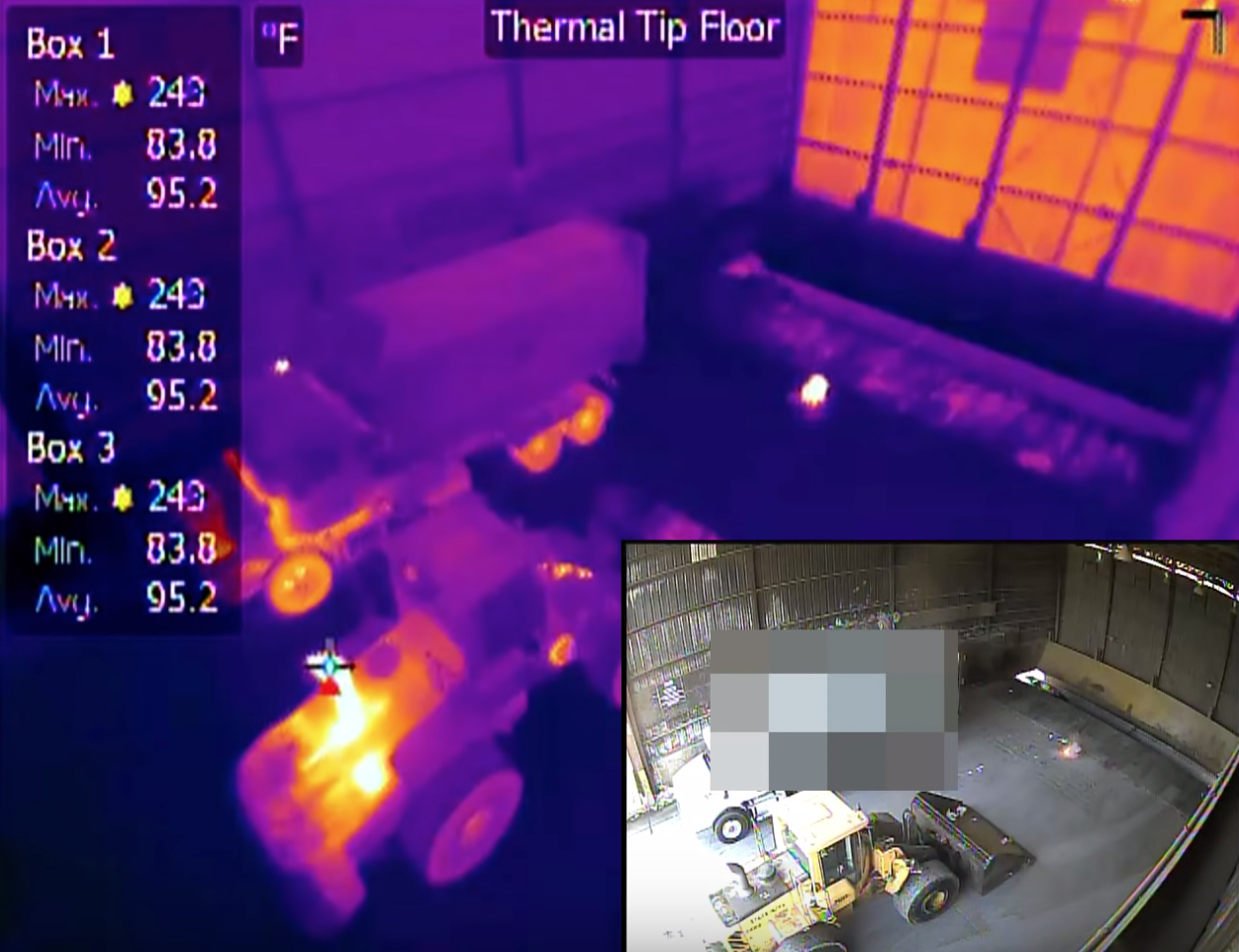 Ryan Fogelman: We have seen fires in the waste and recycling industry for years due to more traditional hazards. Are lithium-ion battery fires more dangerous than traditional fires?

Ronald Butler: Though many in the automotive, fire-research and emergency response industries consider the risk of fire in lithium battery-powered vehicles to be no greater than conventional vehicle systems, there is a general recognition that the byproducts, heat and flame created by these fires create uniquely dangerous conditions. These conditions include toxic substances release and volatile burn characteristics. In other words, while lithium battery fires might not be “more” dangerous, they are very different and uniquely dangerous.

Ryan Fogelman: OK, we understand that lithium batteries are an issue. What is your advice for dealing with the issue?

There is inherent danger associated with the handling of batteries. In most cases, mechanical damage would probably rank as the highest risk factor for initiating a thermal runaway (fire/explosion) event. Improper handling can result in crush or puncture damage possibly leading to the release of electrolyte material or short circuiting. These actions could result in thermal runaway and a resulting fire and/or explosion.

At minimum, an effective strategy for storing lithium batteries is to encourage suppression through cooling, isolation and containment (SCIC). A prime consideration in this approach is that batteries are housed in environments that feature fire suppression systems that extinguish through cooling. Suppressing a lithium-ion (secondary) battery is best accomplished by cooling the burning material; lithium primaries require separate and unique suppression methodologies.

Another consideration is that lithium batteries should be isolated from other battery chemistries and commodities (storage, transport, etc.). They should be stored (shipped) in environments that would effectively contain fires and toxic burn byproducts. This is essential to health, safety and preservation of property. Close attention should be paid to isolating batteries from general facilities by developing external storage or “satellite” storage. Battery storage farms can allow for storage of sight with just-in-time of batteries to the organization when needed.

Companies that possess lithium batteries in high volumes should work with experts to develop training that seeks to mitigate the fire issues and ensures additional layers of safety. Training might address issues like battery awareness or might include more detailed situational training such as battery fire behavior, emergency response procedures and fire suppression use (lithium battery focus). This type of training lends itself well to the preservation of life and property.

Effective battery standard operating procedures (SOPs) will include processes that guide shipping and receiving, handling, daily use, storage and other functions involving the batteries. Proper SOPs will address every facet of the battery lifecycle. These procedures provide the basis for safe use and manipulation and the starting point for developing effective risk management processes.

In most instances, lithium battery fires shouldn’t necessarily be treated like common fires. The burn characteristics and toxic byproduct release components are simply different. An organization might determine their level of risk through proper assessment and create emergency response procedures based on sound response and battery handling data.

I sincerely appreciate Butler’s time and patience discussing his unique perspective on the lithium battery problem. As we head into WasteExpo 2019 next week, I am sure that fire issues and lithium-ion risks specifically will be a hot topic of conversation. If you see me at the show, feel free to stop me to discuss any questions about my research, the combination approach to preparing for the initial 10 minutes of a fire incident or any other questions you might have. I will be in booth #2071 on the show floor during all hours of the exhibition and looking forward to engaging.