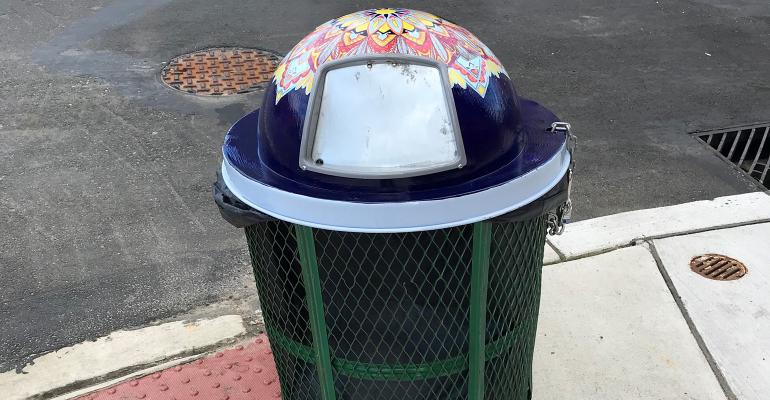 In the Philadelphia neighborhood of East Kensington, the neighbors association is working to make its streets easier on the eyes, in more ways than one.

The Kensington Cans initiative, a project created and led by the East Kensington Neighbors Association (EKNA), has been in the works for about 10 months. It’s designed to help reduce litter by placing trash cans designed by local artists throughout the neighborhood.

“We have a well-known litter problem in Philadelphia,” says Andy Ortega, EKNA member-at-large and leader of the initiative.

The project was inspired in part by a similar campaign in the nearby neighborhood of Fishtown. That project began in 2014, placing bins with lids shaped like fish heads throughout the neighborhood. It was extremely successful and has since expanded to include even more trash cans.

According to Ortega, EKNA saw the positive results of the Fishtown project and decided to put its own spin on the program. “There are a lot of neighbors that are interested in having a cleaner city, and they’re rolling up their sleeves and jumping in there as best they can,” says Ortega.

When addressing the litter problem, Ortega says that the best solution is simply to make it easy for people to dispose of their trash without littering. Citizens will be much less likely to toss trash on the ground if there is an easy alternative nearby. It’s the lack of cans that causes the problem, he says.

“A 10-year-old kid is not necessarily going to be thoughtful enough to carry his potato chip bag home with him if he walks for a mile and doesn’t see a trash can,” says Ortega.

When deciding on what the cans should look like, EKNA wanted to choose a theme that would represent the history of the neighborhood. Having a local artist design each can in their own style was a natural conclusion, borne of the neighborhood’s long relationship with street art.

“We have a great arts festival every year; that’s one of the things that put our neighborhood on the map. To have that as an aspect of our project was something really cool that organically came together,” says Nic Esposito, former EKNA president and current treasurer.

Each can will be sponsored by a local business, and that business will be responsible for emptying the can regularly. The first business to volunteer was the Flow State Coffee Bar, a new café that is set to open in the neighborhood in the coming months. Ortega says the official kickoff of the initiative will likely coincide with the grand opening of Flow State.

EKNA is currently deliberating on several different bin models and reviewing the possibility of receiving grants to finance the initiative. It hopes to have the cans in place in the summer, depending on when Flow State is ready to open its doors.

The initiative is accepting proposals from artists who wish to design a can, and Ortega says EKNA has received about 25 submissions already, with more to follow once the project is advertised more broadly. “Almost every day, someone sends an email,” says Ortega.

“It’s really just three neighborhood associations trying to find a solution to the problem on their front door,” he says.