The dream of curbside food waste collection is alive in Portland.

The city wanted to start a food composting program for years, but a facility to accept food scraps didn’t exist, says Arianne Sperry, coordinator for the city’s recycling arm, Portland Recycles! Then two opened up in 2010 – one by Phoenix-based Republic Services Inc. near Corvallis, and one by San Francisco-based Recology Inc. in North Plains.

“It opened up the possibility of piloting a program,” Sperry says. Portland started with 2,000 households in four neighborhoods.

The city wanted to collect food scraps weekly, so it combined that collection with existing yard waste service and increased its frequency from every other week. Waste collection was reduced to every other week “in part to keep rates from going up.”

With the service changes, officials wanted to make the program as straightforward as possible. “We thought that having a visual cue of how to participate in the program would be helpful to them,” Sperry says. Orbis Corp. had been providing the city a pail for backyard composting, and recycling officials thought that was a good model, so it was used in the food waste pilot.

The pilot program began in May 2010. The city tweaked its materials and messaging, but went forward with basically the same program citywide to 143,000 residential customers on Halloween 2011.

Oconomowoc, Wis.-based Orbis had worked with municipalities in the United States and Canada, and helped get the residential organics collection concept going in Toronto and other areas of Ontario, says John Sebranek, Orbis market manager for environmental products. 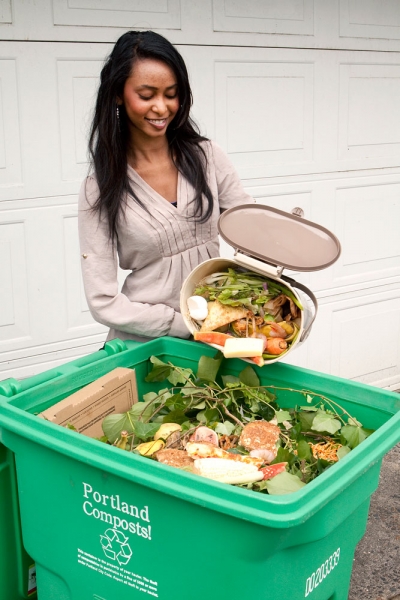 Portland made its interest in a food waste collection program known. “Since we had developed a line of products that cater to that market,” Sebranek says, “it made sense to see if we could help them with their program.”

The city wanted to use a product that was as environmentally friendly as possible. So Orbis took its existing Kitchen Collector line and modified it to include 30 percent post-consumer recycled material.

Sebranek says the biggest challenge for the company in making that change was to find a quality stream of recycled material that wouldn’t negatively impact the product.

The key for a food waste container situated in residential kitchens is keeping odors in and minimizing the amount of pests it attracts. The Kitchen Collector has a double-rim seal for sealing both on the inside and outside. It also fits conveniently on a kitchen countertop or under the sink.

“It really eliminates that yuck factor that causes consumers and residents to not want to participate in food scrap collection programs,” he says.

For Portland, the collection of food scraps with residents proved not to be as controversial as reducing regular trash pickup to every other week.

“It was changing something that was a daily habit of people,” Sperry says. “Certain folks liked having that regular weekly collection, and it was a big change for them to collect the food scraps and put them in the green cart instead. But once you do it, it becomes a habit.”

It’s made a big difference in Portland’s overall recycling rate, which surpassed 70 percent in 2012 after hovering at 51 percent in 2010, before the program’s inception. The program has put Portland ahead of schedule to increase its recycling rate to 75 percent by 2015. “We’re looking at 75-80 percent participation in our program, which is outstanding for the first year of a program like this,” she says.

The city estimated about one-third by weight of the 30,000 tons of waste it was landfilling annually before the program was compostable residential food waste.

The food waste is sent to the area composting facilities for processing. Portland also has operated a commercial food composting program since 2006.

“We’ve had really great success with the program,” Sperry says. “We did a survey that showed 66 percent feel good or very good about the new curbside collection, and an additional 20 percent are neutral.”

She says Portland officials have talked to other program coordinators along the West Coast with similar services, and Portland’s results have been favorable in comparison. Portland has captured twice as much as what some other jurisdictions are diverting. 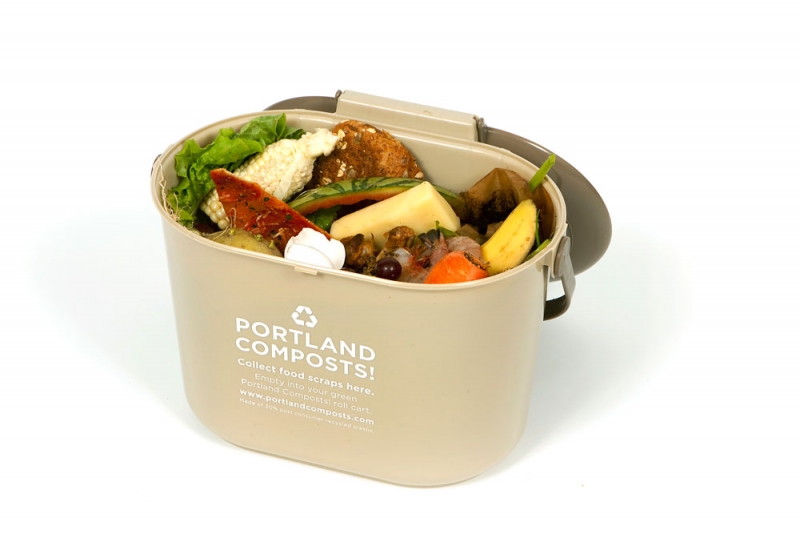 “There was an adjustment period for some folks. ‘Hey, I have to do things differently. What goes in here? I can put bones in with my composting?’ With backyard composting there’s a different list of materials. It takes people a while to figure that out. Their initial concerns about odor or pests – once they start participating they realize these are not difficult things at all.”

Sebranek adds that including a container for the home is key to any food scrap program. “It significantly improves the participation rate; therefore, you get a higher rate of collection.”

While Portland officials are happy with the results so far, Sperry believes the city can achieve greater diversion. “We want to continue to support residents in making the shift, to educate and reach out to folks,” she says. “We know that we’re still only getting half of the food scraps that are out there. We’ve done waste sorts and there’s still a significant amount of food scraps left in the garbage.”

With the shift to every-other-week waste collection, Portland officials wanted to make sure residents had easy access to their collection schedules. So the city developed an online scheduling feature, where residents can type in their address and get an e-mail every week that reminds them of when it’s trash day or which containers to set out. The city also has put together a series of videos teaching residents how to keep their containers clean and other tips.

“There are a lot of agricultural areas around Portland. Lots of people are big gardeners, lots are ‘foodie’ people,” Sperry says. “Other West Coast cities already have food composting like the (San Francisco-Oakland) Bay Area and Seattle. Portlanders were really excited about being able to compost their food scraps.”