How a Compacting Program for N.Y.'s Battery Park City has Improved Residents’ Quality of Life 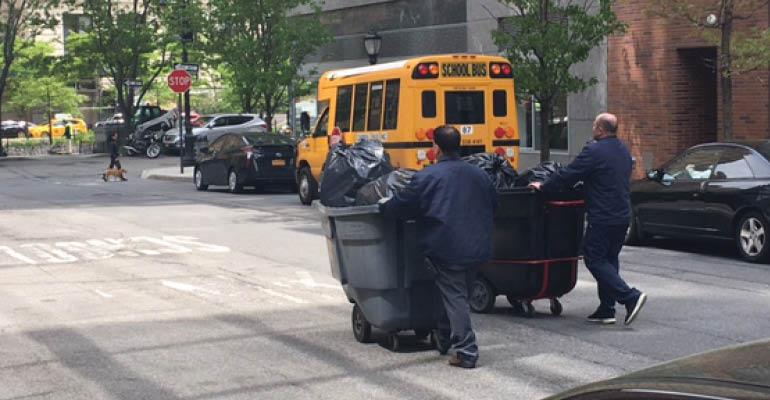 Since 2006, Battery Park City, a planned community with a focus on sustainability, has participated in a compacting program.

Walking the streets of Battery Park City, located on the extreme southwestern tip of Manhattan near where the Freedom Tower now stands, you just might notice something is missing. Where neighborhoods across New York City are stacking garbage along streets and sidewalks for collection by the sanitation department, here, the streets are clear—seven days a week.

So what happens to the trash?

Since 2006, Battery Park City, a planned community with a focus on sustainability, has participated in a compacting program. What began as a pilot in partnership with The Solaire, the nation’s first LEED-certified residential high-rise building, is now a community-wide compacting program that collects approximately 250 tons per month of residential waste from compactors.

Instead of traditional garbage pickup, most of the buildings across the 92-acre site that makes up Battery Park City, have participated in a community compactor program, where garbage from 7,000 residential units from 27 different buildings is placed in wheeled carts and brought to one of the six compactors in the neighborhood. Two staff members at each compactor take it from there—one tipping the trash into the compactor and a second operating the compactor to compress the garbage three to one, making room for the next cart.

The compactors receive trash each day—with the exception of Thanksgiving, Christmas and New Year’s Day—at 2:30 p.m. Roughly 90 minutes later, the compacting is complete and building staff return to retrieve the carts and return them to their respective buildings.

Dedicated New York City Department of Sanitation (DSNY) vehicles pick up the compactor unit, take it to the designated tipping place, and return the same—now empty—compactor back to its spot in Battery Park City. It takes about 150 carts of trash to fill the compactor kept in a room that is 12 feet wide by 18 feet high and 28 feet deep. 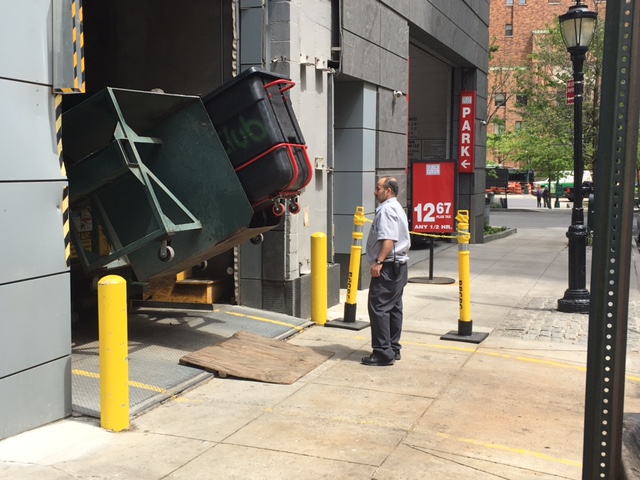 Eleven years ago, says Bruno Pomponio, director of Park Operations at the Battery Park City Authority (BPCA), it took a lot of buy-in from the DSNY and the BPCA, which fronted the money to buy the compactors and build rooms, to start the program. Next, he says, was changing habits. Traditionally, garbage is stored for two to three days in the basements of some high-rise buildings before it is placed at curbs for collection.

Of course, there were challenges. As some buildings were located two to three blocks from the compactor rooms, they had to have the wheeled toters and agreement from the staff to bring the trash each day. Each building had its own operational way of doing things.

“We had to kind of fine-tune it and mold it into what we needed, and have them buy in and do all of that type of work, which in the beginning seemed like more work but in the end where we are today, it’s become a way of doing things.” says Pomponio.

The biggest challenge in the beginning was that the compactors take up valuable real estate. So getting the building developers to give up this amount of square footage for the compactor to live—space that would otherwise be rented and generate revenue—was quite a sell.

Then again, the program has another perk. In winter, DSNY uses garbage trucks to clear the snow along city streets. However, the trucks for the compactor program are not used for snow removal. “So, when the rest of the city is wallowing in garbage—again no garbage on the streets,” says Pomponio.

The result is a source of pride for the area, says Michael Gubbins, the senior vice president of residential management for the Albanese Organization, which is responsible for overseeing The Solaire. Almost at once, there was a cleaner neighborhood. There was a reduction in rodent and pest populations, lower truck noise and emissions—as one truck was transporting the compactors versus several trucks running routes throughout the neighborhood. Those results were noticeable nearly right away, he say, making it easier to sell the idea to the other buildings.

“Garbage was being stored in a sealed area,” Gubbins says “Rodents couldn’t get at it. When you walk around cities, you don’t want to see garbage in the streets, it’s unsightly. And if you put garbage in the streets you have to clean the sidewalks. And from a practical point of view. Buildings don’t have to store the garbage, they can get rid of it every day.”

In fact, says Gubbins, the residents now love the program. It gives them “bragging rights” about clean, quiet streets. Even the developers use the no trash on the streets as an advertisement to perspective buyers and renters.

“We’re very, very pleased and fortunate to have that program,” he says.

“Whether it’s building the sustainable buildings or doing this program we always share our lessons learned. People are looking at this as a great measure for garbage,” Gubbins says. 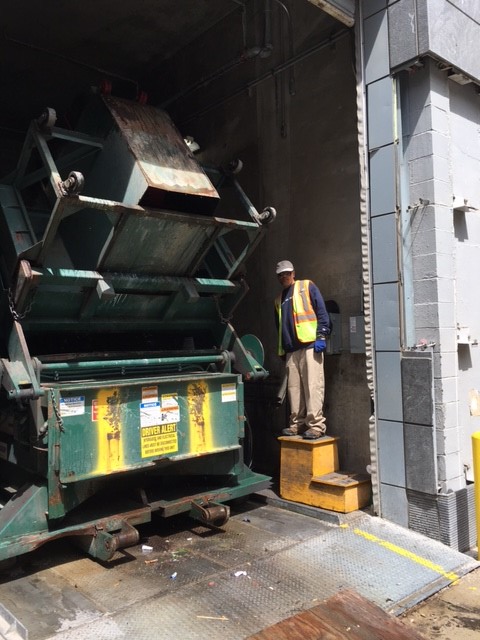