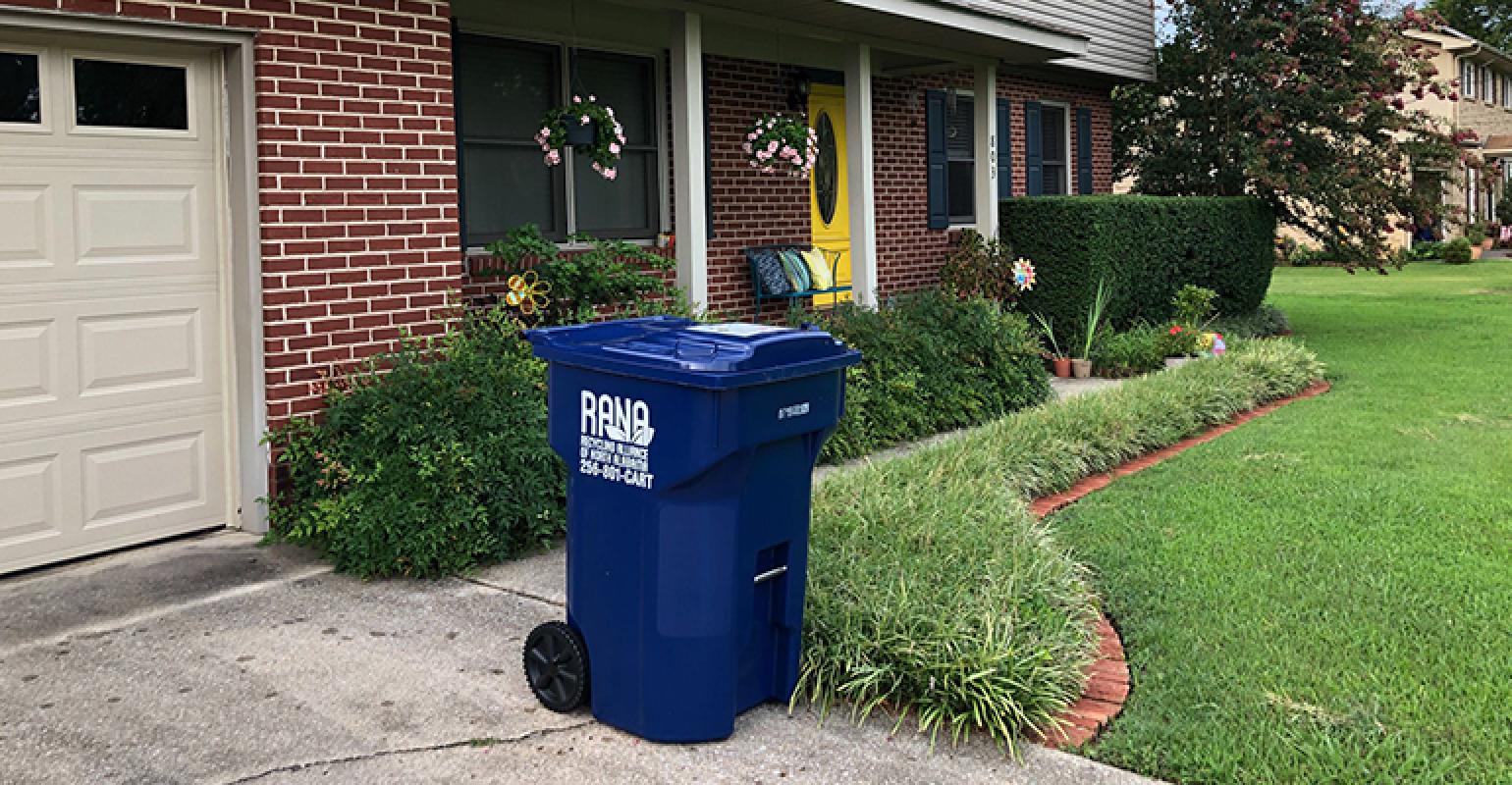 Solid Waste Disposal Authority of the City of Huntsville Facebook

So far, about 2,075.76 tons of recycling materials have been collected since the start of the new RANA program.

Kicking off a new curbside recycling program for its residents in August 2019, the Recycling Alliance of North Alabama (RANA) based in Huntsville, Ala., has reached participation levels of more than 80 percent.

RANA is the Solid Waste Disposal Authority (SWDA)-funded monthly curbside recycling program that replaced the former 18-gallon bins with new 95-gallon carts. So far, about 2,075.76 tons of recycling materials have been collected since the start of the new RANA program.

“The current 95-gallon recycling container is much more substantial and obviously allows for a much greater volume of recyclable material,” says Gregory Gum, a Huntsville, Ala., resident who opted into the program.

Gum has been a resident for 31 years and actively recycled for more than five years.

“We became aware of the program through Facebook as well as the newspaper, The Huntsville Times. We recycled on a weekly basis and had to deal with a small bin, which sometimes blew away,” he says.

In June 2019, residents were able to register for the new program, and approximately 67,000 households participated in the first three months.

“Based on our last spot audit of the [previous] program, this number is up approximately 25,000 households from the previous program participation of 42,000,” says Doc Holladay, executive director of the SWDA for Huntsville, Ala. “Residents are enjoying having a larger cart for their recyclables and having a lid to cover, unlike the former program.”

Residents also are asking for even more opportunities to participate in the program.

“We have had hundreds of requests for second carts, and we are in the process of working on some educational materials that will show residents how to properly place items in their cart to save room, while also educating them on contaminated materials,” says Holladay. “We hope to get second carts out in January 2020.”

RANA has a communication plan in place to boost participation.

“Eighty percent is a fairly high number for a set-out participation, and we believe that communicating with reminders on pickup days and holiday schedules will increase this percentage,” says Holladay.

RANA provides email reminders the day before service to those who provided their email addresses. The group also is exploring the possibility of utilizing text messages to communicate pickup days and information on what goes in the cart to reduce contamination, in addition to tips on utilizing the cart effectively.

“The potential for missing a pickup day exists; however, the North Alabama recycling project has a Monday evening email as a reminder of our Tuesday pickup, [which is] the first Tuesday of the month,” says Gum.

Route development was a challenge in getting the program started, as 20,000 additional households were added into a service area that is 800 square miles.

“In the beginning, residents thought when they registered, a cart would show up quickly. We had a phased process for cart deliveries, and people in phases 2 or 3—who signed up later in process—wanted their carts quicker,” says Holladay. “Residents also were used to the former program with weekly curbside pickup, but we haven’t heard much more about that since the new carts are five times larger and easier to handle.”

RANA has communicated frequently during the past several months via new media, social media and partnerships with other agencies to overcome these issues.

“We brought in more people to answer phones and emails, and we try and get to every resident as quickly as possible,” says Holladay. “With new programs that are large scale like this, we were expecting a few road bumps, but overall it’s gone smoothly.”

As a resident and participant in the program, Gum agrees.

“I have been very happy and think that this initiative was handled very professionally,” he says.