Who Should Pay to Advance a Circular Economy for Scrap Tires? 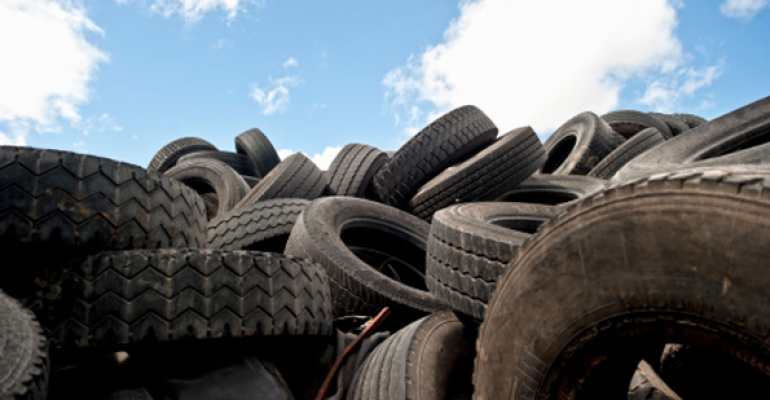 About 3.9 million tons of waste tires are generated annually in the U.S., and each state for the most part is on its own to manage them. About 35 states have set up consumer-funded programs to manage the waste and see that scrap tires are put to use. But there aren’t enough end markets, and stewardship organizations and some state regulators say industry should share the burden of dealing with the material.

The U.S. Tire Manufacturers Association (USTMA) disagrees, saying it should be on the states to ensure that scrap tires are responsibly managed and to grow end-use markets. And there’s already a fairly robust market: tire-derived fuel. But the opposition argues that burning tires to make fuel is not environmentally sustainable, and that the robustness of the market depends on the region.

Connecticut and Vermont are among the states that have led the way in trying to put the onus for scrap tire management on manufacturers. Both jurisdictions drafted Extended Producer Responsibility (EPR) bills, though the legislation met industry opposition and never passed.

EPR programs would require brands to fund the cleanup of tire piles and the expansion of scrap tire markets, or else leverage fees on tire sales to accomplish these tasks. Brands would have to administer the program themselves, typically by forming a stewardship organization to take on the role. And they would have to follow specific rules pertaining to recycling and reporting.

Connecticut’s Department of Energy and Environmental Protection (DEEP) developed the state’s long-dead EPR bill shortly after the closing of a local plant that used waste tires to produce tire-derived fuel.

The plant’s closing left 9 million tires a year with no home. DEEP called a stakeholders meeting to discuss the problem. While the jurisdiction focused on its own issues, officials from 22 states came to particpate in the dialogue.

In a survey administered before the meeting, 65 stakeholders asserted that they had a tire dumping problem, according to Scott Cassel, CEO and founder of the Product Stewardship Institute, which worked with DEEP to convene the meeting.

That was five years ago, and there are no current comprehensive figures on illegally dumped or stockpiled tires, though it appears many large piles are gone. Still, some governments report smaller accumulations and the dumping of tires into bodies of water and on roadsides, which have caused fires and created breeding grounds for disease-carrying mosquitoes

Isolated cases routinely make headlines around the country, such as a recent article about illegal tire dumps in Cherokee National Forest in Tennessee.

Of the 35 states with their own scrap tire programs, some do well, but some run into barriers.

“Many states have limited resources to run sustainable programs,” Cassel says. “In some states, tire fees have been funneled into the general fund, making them unavailable for the management of scrap tires. And in addition to fees consumers pay when they buy tires, many retailers impose their own charge to help pay their costs to manage end-of-life tires.”

There are others stepping in, such as environmental groups like Connecticut River Conservancy, which cleans up rivers. But they pay out of pocket through their labor and cost to dispose of the tires.

Still, Sarah Amick, vice president of environment, health, safety and sustainability and senior council for USTMA, says that what she calls the “current free market system” is working.

“We encourage states to focus on programs that support market development and growth,” Amick says. “Innovative companies are introducing technologies, and states can help them come to market by furthering research with scrap tire funds collected on tire sales.”

Of the roughly 35 states with tire programs, Amick cited two that she knows are doing well in this space: Michigan and California.

California’s program has a few main focuses. One is on regulations and enforcement directed at haulers and storage facilities to mitigate illegal dumping and stockpiling. Another focus is on market development. Grants and loans are awarded to processors to make new products from tires. Local governments are also awarded grants for tire waste cleanups and for inspections.

In 2018, the program managed about 511,000 tons of waste tires, marking its fourth straight year of increased recovery rates. Scrap flowed to nine market segments, with 43% going to refuse-derived fuel, which many states do not consider environmentally preferable because burning generates emissions.

Looking beyond California, Tom Metzner, an environmental analyst with the Connecticut Department of Energy and Environmental Protection, says markets are “terrible” for waste tires in many states.

“Pulp mills are the primary outlet, if you can get into them,” Metzner says. “Those markets do remain somewhat economically sustainable in Rhode Island, New York, Massachusetts, Maine, Vermont, New Hampshire, and here in Connecticut, though the market is down, so it’s becoming less viable in some states because of an oversupply.”

Metzner says his agency and others like it would like to see scrap tires go to higher uses.

“I think everyone in the country is dealing with tight markets,” he says. “Illegal dumping is evidence of this. If tires had enough value, people would not dump them.”

The money for Ontario’s tire recycling program comes from producers that hired a company to manage the program. The funds pay for the cleanup of stockpiles. There are specific restrictions on fees to run the program. Tires can’t be burned to make fuel. And the regulations lay out tire manufacturers’ obligations pertaining to diversion rates and reporting requirements.

From the Ontario program’s launch in 2009 through 2018, more than 120 million tires were diverted from landfills. Over a million stockpiled tires were cleaned up, and the province has recycled nearly 100% of the scrap tires collected annually.

“A key to success was the establishment of collection points, transporters and processors,” says Zach Dryman, former vice president of technology and infrastructure for Ontario Tire Stewardship, which oversaw the launch of the program. “As key to our outcomes was that the brands provided the funding that allowed the used tire program to onboard this logistics network.”

So why haven’t more states pushed for EPR bills?

Cassel notes that governments are struggling with the management of waste packaging, sharps, pharmaceuticals, and the rest of the waste stream, so the concept of EPR for tires has to compete with all of that. And because an old solution exists — tire-derived fuel — other priorities with no solutions often become the next thing that states choose to work on.

Meanwhile, some stewardship stakeholders are trying to determine how to advance closed-loop systems in which tires would be retreaded or remanufactured.s

“Current market-based solutions like tire-derived fuel do not incorporate full product life-cycle costs and benefits,” Cassel says. “This results in more pollution, more tire piles, and less accountability. Under EPR, tire manufacturers can be charged lower fees for retreading, recycling, use of recycled content, and other initiatives. Manufacturers will therefore have financial incentives to better manage scrap tires that are consistent with a circular economy.”