Thinking Inside the Box: The State of Carton Recycling

Thanks to deliberate efforts by producers, carton recycling has burgeoned in recent years, but still has a ways to go.

You might not notice them in your refrigerator. They represent less than 1 percent of the waste stream. But beverage carton recycling is hot.

In 2009 only 18 percent of U.S. households had access to recycling of cartons, those plastic-lined paperboard containers used for milk, juice, soups, wines and a few other consumables. That year four packaging companies formed the Carton Council to develop a strategy to jumpstart recycling of the product. Two years later 37 percent, or roughly 40 million households, have access to carton recycling. The council expects that rate to expand at a healthy clip. Waste Management Inc. and Tropicana Products Inc. have worked with the council and large metropolises like Los Angeles (July) and Dallas (September) recently added the carton recycling option. 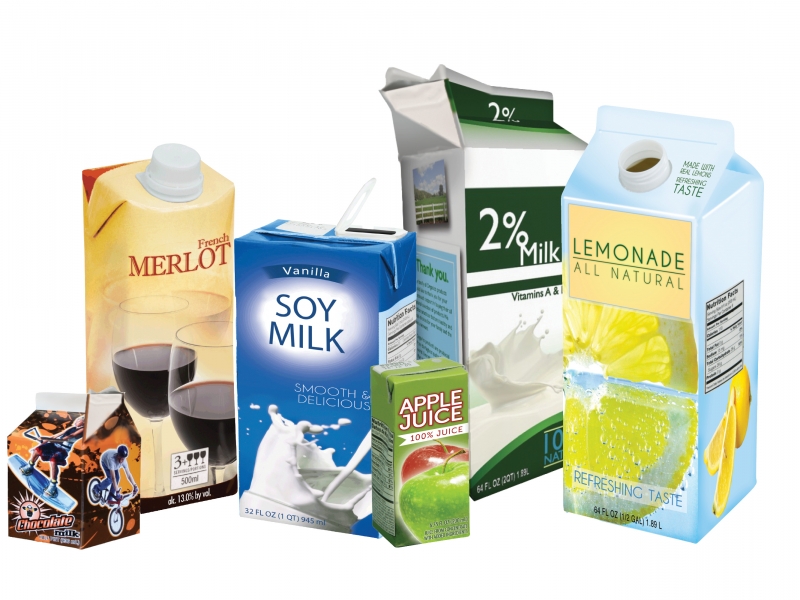 “We love the program and we’re excited about another product we can take from the black (refuse) bin,” says Alex Helou, assistant director for the Bureau of Sanitation in Los Angeles.

In 2008 Tetra Pak Inc. and other packaging companies saw that carton recycling was well entrenched around the world but dormant in the United States. “For whatever reason the (United States) was lagging behind the global trend,” says Jeff Fielkow, who was vice president of recycling and sustainability with Tetra Pak Inc. until November, when he joined ReCommunity Recycling as executive vice president, growth and development. Fielkow says the packaging companies concluded, “We know we can do better on our recycling rate. Let’s identify and remove the barriers.”

The group — Elopak, Evergreen Packaging, SIG Combibloc and Tetra Pak with paper product maker Weyerhaeuser Co. as an associate member — formed the Carton Council. Consumers and retailers were increasingly emphasizing recycling, and the carton market was growing. “The timing was perfect,” Fielkow says. 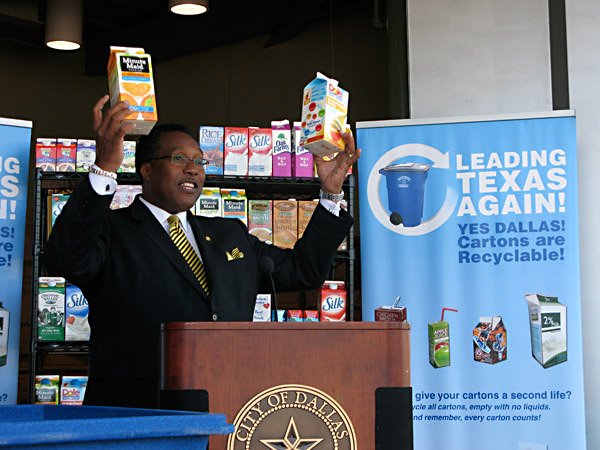 Fielkow, as vice president for recycling with the council, developed a strategic model that could be replicated in a range of situations. He determined that one of the problems was that the recycling industry was operating under a lot of misinformation when it came to the carton. “Most of the recycling industry wrongly thought that it wasn’t recyclable because it was a bi-material product,” he says. Council members worked with recyclers to demonstrate how cartons can be collected, processed and even more importantly, how they can be marketed.

Fielkow determined one key was to make carton recycling more accessible to customers. Another key was to develop an efficient way to sort the material. The council helped develop appropriate infrastructure and made investments where applicable.

The third key identified by Fielkow was to develop good domestic mill sources, since fiber is the key material that comes from carton recycling. There was one mill customer for cartons when the council started; there are nine now.

The final key was communication. “Once the infrastructure is there, that we continually make carton recycling top of mind,” Fielkow says.

And the council stressed more than just carton recycling. “When we invest in carton recycling it tends to help all of recycling,” he says. “Diverting from the landfill is the ultimate goal.”

One reason the Carton Council took on this challenge was that its members are global companies that operate in other markets where carton recycling is already ensconced. “We know it works and we have proof points around the world,” Fielkow says.

There are two types of liquid cartons: aseptic and gable-top. Gable-top cartons, which feature peaked roofs, are refrigerated. They are composed of 80 percent paper and 20 percent polyethylene; the polyethylene forming two internal layers separated by a layer of paperboard. Aseptic cartons don’t require refrigeration. They add a layer of aluminum that keeps out odor and light, and then a third polyethylene layer inside it. This gives aseptic cartons what the industry calls “shelf-stability.” They are composed of 74 percent paper, 22 percent polyethylene and 4 percent aluminum.

In Europe and even Canada, energy costs are higher resulting in less refrigeration in grocery stores, says Jim Frey, chief executive officer with Resource Recycling Systems, which consults for the Carton Council. Because of this, 85 percent of liquid packaging in those regions is aseptic, while it’s only 15 percent in the United States.

Frey points to several carton traits that give it an environmental advantage. They are made primarily of paperboard, which is more attractive as a recyclable material than plastics, for example. Its typical rectangular shape allows for a high volume to be shipped or stored on a retail shelf, reducing energy and transportation costs. The packaging is made to fit the product; the package comprises only 6 percent of the total product. “You’re not shipping lots of air,” Frey says. The product is lightweight. 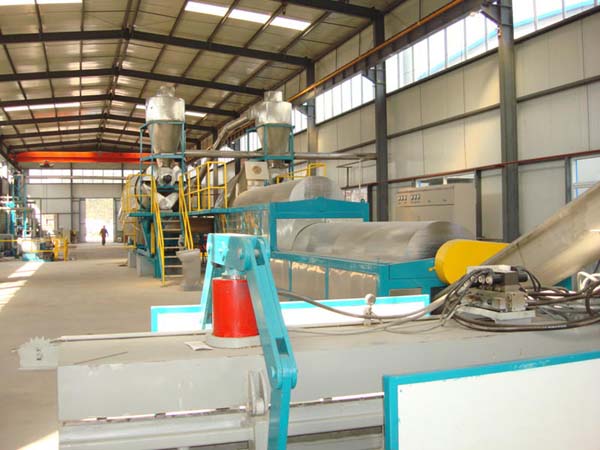 The traditional recycling process for cartons involves stripping all the components — the paperboard, polyethylene and aluminum, along with the stems, spouts, straws and caps — and deinking the paper. “It’s a time-consuming process that takes a lot of energy, a lot of water,” says David Phillips, chief executive officer, ReWall Co. LLC.

ReWall is distinct in that the company uses another, European process to turn cartons into building products, the company’s business line. Partnering with the process’ inventor, Eastern Europe’s Kuruc, ReWall recycles the whole carton together, avoiding the use of water, chemicals or glue. “Not using water is a great advantage,” Phillips says.

One alteration ReWall made is that the European model is based solely on aseptic cartons. The ReWall method adapts for a variety of cartons. “Each time you have to adjust your equipment. But quality is king, so you do it,” he says.

ReWall partnered with First Fiber Corp. of America to get a supply of material. “That allowed us to focus on operations,” says Phillips. The growth of carton recycling is reflected in ReWall’s supply options. “We’ve learned of a lot more sources in the last few weeks we didn’t know about,” he says.

One reason carton recycling is becoming more popular is because consumers of the recycled material are realizing its quality, says Chaz Miller, state programs director, Environmental Industry Associations. “Fibers in cartons tend to be strong, good fibers,” he says. Meanwhile mills are seeing other material sources, such as office paper, dry up.

There are marketing motivations as well: “Manufacturers want to show it’s a recyclable package,” says Miller.

There have been some problems with carton recycling in the past, Miller says. On the consumer side they are a little harder to keep clean than milk jugs and can hang on to the sugars that attract vectors and flies. The liquid and coating combination can make cartons slippery and a little difficult to bale, Miller adds.

Figures from the U.S. Environmental Protection Agency indicate that 460,000 tons of gable-top and aseptic cartons were generated in 2009. Fielkow estimates that now about 500,000 to 550,000 tons of cartons go to the market, excluding imports and exports.

The EPA reported in 2009 that 30,000 tons of cartons were recycled, or 6.5 percent. Fielkow admits it’s hard today to get a good handle on the carton recycling rate, because private recyclers don’t have to divulge figures and data on exports isn’t available. But Fielkow contends that carton recycling tends to mirror the overall diversion rates of a jurisdiction if there’s access.

Tetra Pak itself reports that 30 billion of its used cartons were recycled globally in 2010, doubling the recycling rate in 2002. That diverted 473,000 metric tons.

The city is aiming for zero waste by 2025 and is closing in on 70 percent diversion. Before working with the Carton Council, Helou says, “We told those residents those cartons couldn’t be recycled.”

The city now recycles 40 tons of cartons a month. And because the cartons are lightweight, it takes more to make a ton. “Overall it’s been great,” says Helou. “We now have a huge stream that can be placed in the blue bin.” 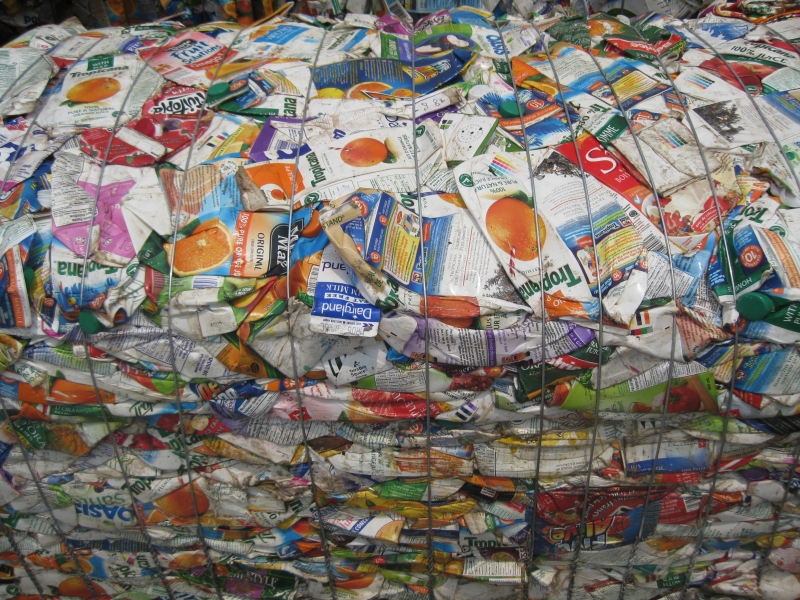 Resident education continues to be the biggest challenge. The city plans to alter the stickers inside its 3 million containers that tell residents what can be recycled to include cartons. City workers that check the blue bins do some one-on-one education with residents.

Helou says the material recovery facilities (MRFs) have not only been supportive of the program but would like to get more of the material than they are currently receiving. Moreover, it’s been an economic gain for Los Angeles, as it sells the material for $20 to $25 a ton. “It’s a positive for the city,” he says. “One, they’re keeping material from the landfill, and two, they’re generating revenue for the city.”

While Fielkow is highly pleased with progress that’s been made, the biggest challenge going forward is patience. “We want to make all these changes overnight,” he says. “We have to be cognizant that our time schedule needs to match the time schedule of communities, recyclers and sorters.”

The other big challenge is overall awareness. “That’s an ongoing project that will never end,” says Fielkow. There’s still some misperception in the industry about carton recyclability, he adds, but not nearly the confusion that existed just a few years ago.

The council also works with the mills to develop markets for the polyethylene and aluminum. That’s another goal the council has set for itself, to make sure that this material doesn’t end up in a landfill.

The mills are receptive because they want the coveted paperboard material. The price of the fiber has nearly doubled compared with other products in just the past two and a half years, Frey says.

The council found that a paper mill putting a ton of carton paper into the hydrapulper —even contending with the polyethylene and aluminum —nets 68 percent to 73 percent useable recyclable material, which is at or better than office paper.

Fielkow says recyclers looking to add cartons should be prepared to be creative. If recycling is brought online in a low-volume area, perhaps material from several MRFs can be brought together “to keep the material flowing.”

Frey said he doesn’t have specific data on the future market for carton products themselves, but “it is a growth trajectory,” particularly with soups, broths and other chunky food. Also, the emphasis on sustainability and energy conservation should boost the market.

“They [carton makers] have a high commitment to the sustainability of their package,” Frey says. “They have had this motivation and developed this strategy, which is somewhat disproportionate with the waste stream.

“They’re the new kid but really setting the standard for best practices.”

Jan Lambert, president of First Fiber Corp., estimates only 2 percent of the entire market has been captured. “We haven’t scratched the surface of what’s available,” he says.

And continuing to capitalize on that market is the carton recyclers’ big-picture plan. “We call it building the pipeline and then filling the pipeline,” Frey says.