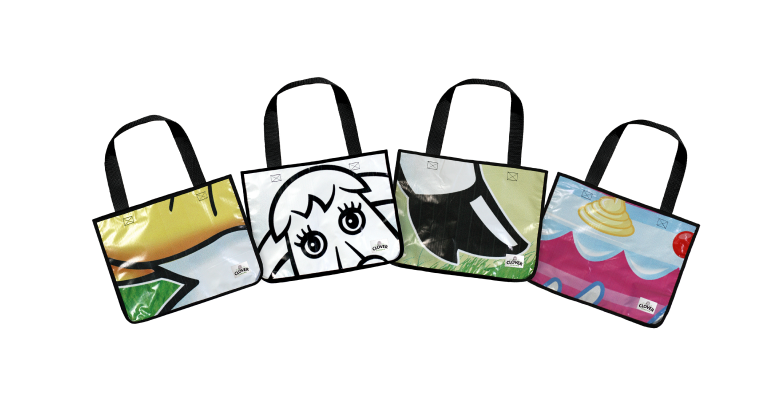 Santa Rosa, Calif.-based TekTailor has been in the cutting and sewing business for nearly 30 years, making protective gear initially for skateboarding, then for the military. The family-owned business kept its scraps and had accumulated a great deal of material over time but was running out of space for it.

So in 2015 TekTailor CEO Steffen Kuehr spun a plan for the leftover yardage and went hunting for more would-be waste to add to the mix, in order to make sellable products under the brand name Sonoma-USA.

The first feedstock Kuehr added to TekTailor’s stash was from billboards and linens. But the company has since taken in some unusual materials that it upcycles into one-of-a-kind gifts for companies to give to their employees, though it makes varied wares for just about anyone looking for what’s unusual and sustainable. Not long ago Recology dropped off one and a half tons of damaged firehose from the Kincade wildfire in Sonoma County that was turned into dog leashes, coasters, floormats, and rugs.

“In the beginning I approached Sonoma Raceway and asked, what do you do with the signage around the racetrack?” says Kuehr.

It turns out the operation was storing the signage and eventually taking it to a landfill. So Kuehr started picking up Sonoma Raceway’s banners and billboards and combining them with TekTailor’s scraps to make durable bags. The sturdy billboard is used as outside material, and soft sewing scraps become lining.

“These products are unique rather than mass-produced, low-quality goods,” says Kuehr. “They are made locally, and we are not creating new materials or waste but making them from what we keep out of landfills. These are all priorities to our clients, so we are helping support their value system.”

The Solid Waste Association of North America sends retired trade show signage that is upcycled into giveaways for SWANA’s board of directors, tech division leaders, and other members.

“We learned what Steffen was doing from one of our executive directors who met with him at one of our events,” says Andrea Lazo, SWANA’s graphic designer. “We had all these leftover cloth and vinyl banners from years of past events that we stored out of not knowing what to do with them. We had a lot of them that were so dated, and we liked that Steffen was offering product made from all recycled materials.”

Signage has been upcycled into tote bags, zipper pouches, and wine carriers with the SWANA logo printed on them. Kuehr also sent along a bonus: a video showing how the material was transformed. SWANA posted the video on YouTube and embedded a link to it in a member newsletter.

“We found this video cool because it was a way for us to highlight this partnership and show our members what we do post-event, which is creating memorabilia instead of being wasteful,” Lazo says.

Tek-Tailor has upcycled highway billboards for local dairy company Clover Sonoma for years. For example, Tek-Tailor converted billboards into tote bags to give to Clover Sonoma employees at the company picnic. This year Clover Sonoma did something different to provide a lasting snapshot of a special milestone: the 50th birthday of the company’s well-known mascot, Clo the cow.

“We have been doing large billboards for decades and change them bimonthly, so we have a lot of them,” says Sally Bricker, associate trade marketing manager at Clover Sonoma. “This year we made bags from Clo’s 50th birthday billboards for employees and the community. We wanted to have something to give back that is part of Clover’s history. Also, TekTailor is local, and we are all about working with local businesses.”

Each 12-by-18-inch bag upcycled from the anniversary leftovers has art pulled from a billboard, whether a snippet of a balloon, a piece of birthday cake, or Clo’s big smile. The company wanted to include a replica of the entire billboard, so an image of it transferred to cloth was sewn inside each bag, along with the message, “This bag was made by Sonoma-USA.com from this upcycled Clover Sonoma billboard.”

“I think it’s fun for people to have a piece of this billboard and our history,” Bricker says. “And for them to know it’s upcycled is huge. It’s exciting to be able to upcycle what would possibly otherwise go to a landfill, and to let people know we are doing this.”

TekTailor offers both pickups and drop-off locations and organizes material in its warehouse, which it weighs so that clients know how much they diverted.

In addition to 20,000 square feet of warehouse and a cutting area for sewing and upcycling operations, TekTailor has a small on-site retail store where it sells upcycled products.

“We clean and cut it and have experienced industrial sewers that turn it into durable finished products,” Kuehr says.

While there are small unusable pieces that are discarded, some of the scraps that can’t go into products are sold or given to schools or a local children’s museum for craft projects.

As far as the retail end, Kuehr says most of TekTailor’s business is focused on corporations that buy back what TekTailor makes for them, although the company does sell some items on its website and at craft shows.

“We are typically approached by end users directly or by merchandise companies looking for unique products for their clients,” Kuehr says. “These are people specifically looking for sustainably made gifts. There has been a growing demand for what’s unique and sustainably made.”

The company continues evolving through COVID-19. Here’s what Kuehr told us is going on from TekTailor’s shop these days:

“The last few weeks have been nuts here since we completely shifted our production to face masks. We have hired back workers and grew the team from 6 to 14 people, are working 6 days a week, and have delivered thousands of face masks to local businesses and hospitals. ”