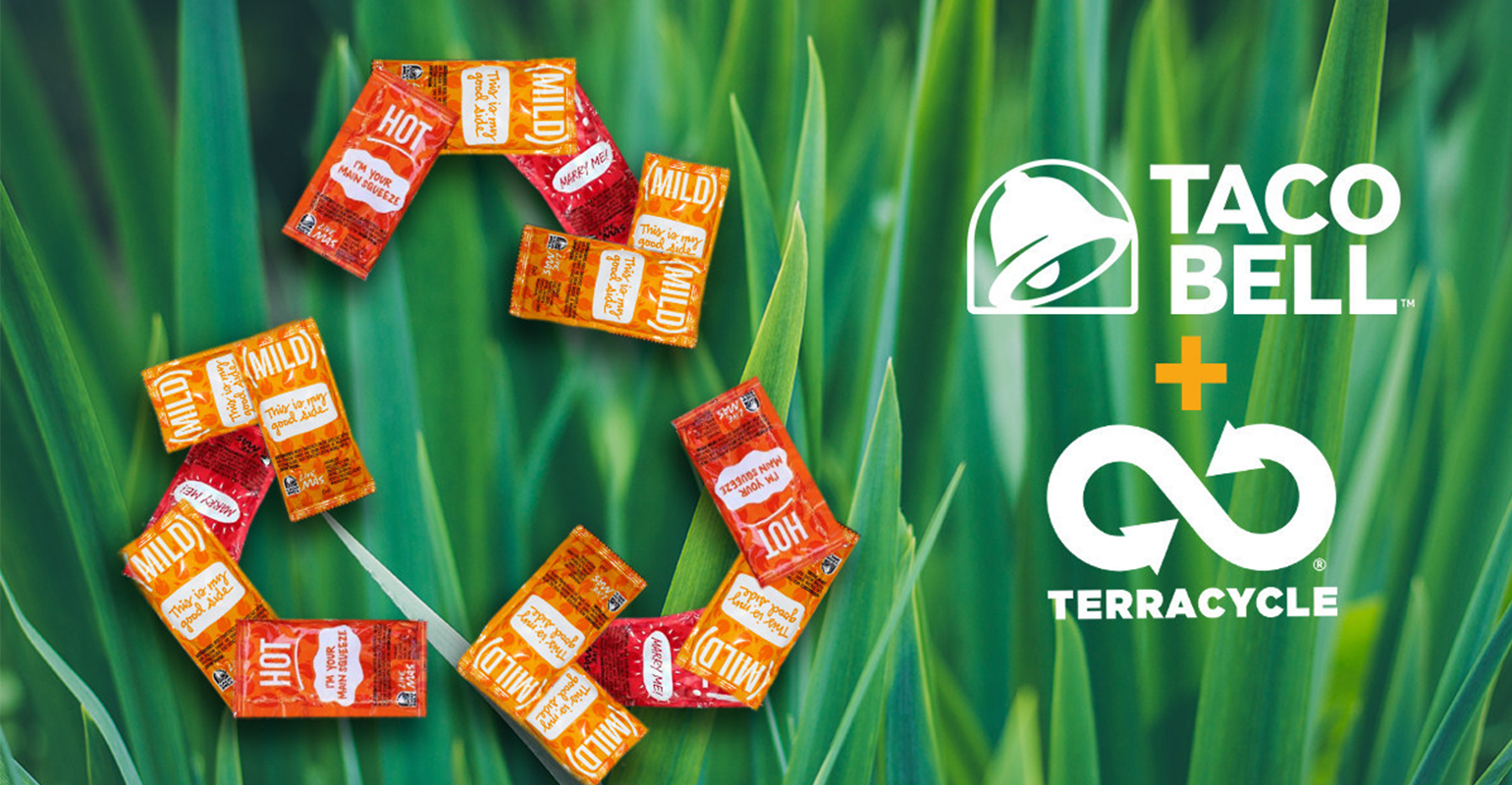 IRVINE, Calif. --Taco Bell knows its fans have more than just a mild obsession with its hot sauce packets, with 8.2 billion sauce packets used in the U.S. each year. They're iconic. But today, they're not recyclable. That's why Taco Bell will be collaborating with international recycling leader TerraCycle® later this year to give its sauce packets a spicier second life that doesn't involve a landfill. Taco Bell, no stranger to industry firsts, is the first QSR brand to partner with TerraCycle to tackle recycling flexible film packets.

While the companies will announce details of a national U.S. recycling pilot program later this year, customer participation will be easy and will incorporate free shipping. An industry pioneer, TerraCycle is renowned for collecting traditionally non-recyclable materials, cleaning them, then melting and remolding them into hard plastic that can be used to make new recycled products. This means that one day, used sauce packets could have an exciting future as something totally new.

"In the food industry today, there is no widely available solution for recycling the flexible film packets that are so commonly used for condiments," said Liz Matthews, Taco Bell's Global Chief Food Innovation Officer. "So, we're thrilled to leverage the expertise of TerraCycle to recycle our iconic sauce packet packaging in a way that's as bold and innovative as our menu."

The ability to recycle sauce packets is very important in achieving Taco Bell's goal of making all consumer-facing packaging recyclable, compostable, or reusable by 2025 in restaurants across the globe. The pilot launch is slated to take place later this year, and its results will determine the most viable solutions moving forward, including potential program expansion.

"Now more than ever, consumers don't want to sacrifice the planet no matter how delicious the meal," said TerraCycle CEO and Founder, Tom Szaky. "Together, Taco Bell and TerraCycle will push the quick service industry by finally finding a way to recycle this type of product. This effort takes us one step closer to keeping packets out of landfills and our mission of 'Eliminating the Idea of Waste.'"

For customers who may already be eager to recycle their sauce packets, there are steps they currently can take to leave a lighter footprint. Be sure to check the specific recycling and composting guidelines of your local municipality when disposing packaging, and if you don't use each packet from your Taco Bell order, save it for later to add some kick to other meals. For more information on TerraCycle's recycling programs, visit www.terracycle.com.

About TerraCycle
TerraCycle is an innovative waste management company with a mission to eliminate the idea of waste. Operating nationally across 20 countries, TerraCycle partners with leading consumer product companies, retailers and cities to recycle products and packages, from dirty diapers to cigarette butts, that would otherwise end up being landfilled or incinerated. In addition, TerraCycle works with leading consumer product companies to integrate hard to recycle waste streams, such as ocean plastic, into their products and packaging. Its new division, Loop, is the first shopping system that gives consumers a way to shop for their favorite brands in durable, reusable packaging. TerraCycle has won over 200 awards for sustainability and has donated over $44 million to schools and charities since its founding more than 15 years ago and was named #10 in Fortune magazine's list of 52 companies Changing the World. To learn more about TerraCycle or get involved in its recycling programs, please visit www.terracycle.com.