The Solid Waste Disposal Authority (SWDA) announced it has issued a request for proposals (RFP) for more efficient curbside recycling collection and materials processing services in Huntsville, Madison and Madison County, Ala.

The authority is also planning to replace the small 18-gallon rectangular bins with larger 95/96-gallon wheeled carts. The new automated program will gain efficiencies by utilizing rolling carts that will be serviced on a monthly basis.

Additionally, the new program is designed to expand the service area to include approximately 20,000 additional single-family households that have historically been outside of the service area, according to John R. “Doc” Holladay, SWDA executive director.

Holladay further advised that the authority is opening a new household hazardous waste facility with expanded days and hours of operation to allow residents a more convenient method of disposal for hazardous waste from their households. These two program improvements will allow for more successful removal of valuable recyclable materials from the waste stream and for removal of hazardous waste for proper disposal.

The contract with the current recycling provider, Republic Services, ended in December and the authority and Republic negotiated a seven-month extension of the program so none of the current customers in Huntsville, Madison and Madison County would be inconvenienced, explained Holladay. The current service is scheduled to end Wednesday, July 31.

“SWDA is working to eliminate or minimize any potential interruptions in the program. We will keep the public informed as we receive responses and have a better understanding of when the transition will occur,” said Holladay in a statement. 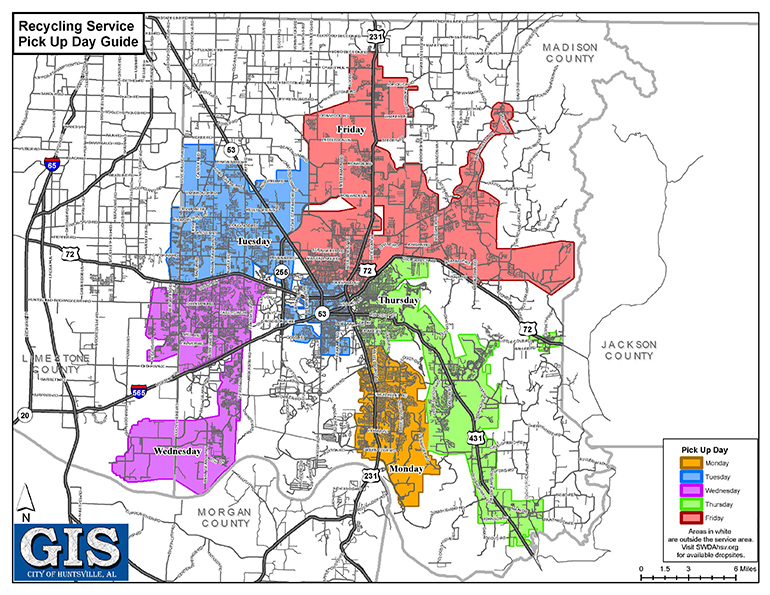 “The curbside recycling program has grown consistently throughout the years, and the aged bin system is no longer sufficient to meet our program’s needs,” added Holladay. “The older system was performed manually and was labor intensive. Larger containers, automated collection and less frequent servicing of the bins is a more efficient allocation of resources and allows us to extend service to an additional 20,000 households.”

The program will be called the Recycling Alliance of North Alabama and SWDA will manage it.

Within the next few weeks, a separate RFP for rolling carts will go out. This contract will end the 18-gallon bins that are currently being used in the recycling program and add 95/96-gallon rolling carts, pending proposals.