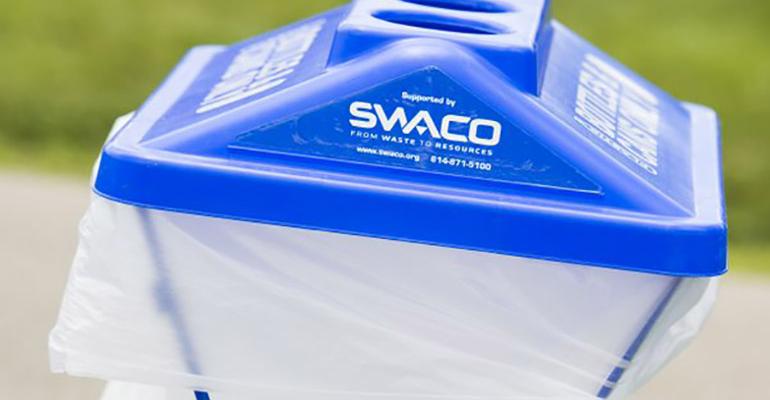 During the study period, 180 commercial and residential trash samples were collected and analyzed.

The Solid Waste Authority of Central Ohio (SWACO) has released a study documenting that up to 76 percent of the material currently being sent to the Franklin County Sanitary Landfill could be recycled or composted. The study also found that of those discarded materials, the items presenting the biggest opportunities for increasing diversion were food scraps and corrugated cardboard.

The study, known as a waste characterization, was completed last year and conducted over the course of four seasons by Cascadia Consulting Group and MSW Consultants. During the study period, 180 commercial and residential trash samples, weighing 39,000 pounds in total, were collected and analyzed. The materials were sorted into 64 categories and evaluated based on their weight, material type and recyclability to determine what’s being thrown away and how much of that material has the potential to be diverted from the landfill.

The top 10 items most commonly found in Franklin County’s waste stream are:

Combined, these items make up 68 percent, or 772,234 tons, of the material being landfilled.

The three most prevalent items in Franklin County’s waste stream are food scraps, corrugated cardboard and compostable items and fiber. All of these items can either be recovered through currently offered programs or have the potential to be captured and diverted if new programs and services were established.

“While we weren’t surprised to learn that so much food was coming to the landfill, we remain committed to decreasing landfill disposal of all types of materials, and we’re already at work helping to support rescuing edible food and redirecting it to families and individuals in need. We’re also working to increase opportunities for composting of inedible food and encouraging waste reduction practices to avoid the creation of waste in the first place,” said Kyle O’Keefe, SWACO’s director of innovation and programs, in a statement.

When evaluating Franklin County’s potential to increase diversion based on the waste stream, the study found that of the 76 percent of the material currently being sent to the landfill which could be recycled or composted, 41 percent could be diverted today through existing programs and an additional 35 percent has the potential to be diverted with new programs and infrastructure.

In November 2019, SWACO reported that Franklin County had reached a 50 percent diversion rate, yet the county still landfills more than a million tons of waste every year. SWACO has set a goal to help residents and businesses in Franklin County divert 75 percent of their waste from the landfill.

In order for the community to reach those goals, SWACO is using the data from the waste characterization study to make informed decisions regarding the creation of new programs aimed at increasing the diversion of a wide range of materials. In the last year alone, SWACO introduced new programs to help thousands of residents recycle more of the materials generated at home, to facilitate reducing food waste occurring in school cafeterias and to promote the composting of food scraps at home and at area businesses. Those programs include the Recycle Right, Make a Difference campaign, Residential Recycling Cart Initiative, SWACO’s Community Consortium Program and the Central Ohio Food Waste Initiative.

The study also assessed the value of the materials being landfilled and which are currently accepted for recycling through Franklin County’s curbside, drop-off and other recycling programs. Those materials are estimated to have a market value of approximately $23 million dollars.

“It’s easy to connect how reducing our waste and increasing our recycling is good for the environment, but what isn’t always immediately obvious is the economic benefit of recycling, too,” said O’Keefe in a statement. “When we throw away items that have the potential to be recycled, we miss the opportunity to create the jobs needed to turn those materials into new products as well as the millions of dollars that could be reinvested right here in the central Ohio region.”

Later this year, SWACO will launch new educational programs for capturing and recovering food waste, including funding drop-off composting sites in a number of Franklin County cities, and will unveil new resources to assist area businesses with the start up and expansion of recycling programs.