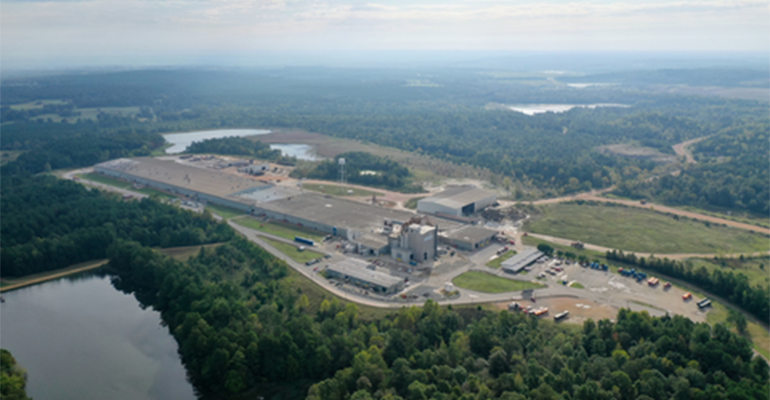 NASHVILLE, Ark.--Saint-Gobain, through its building products subsidiary CertainTeed LLC, has installed recycling technology at its gypsum wallboard plant in Nashville, Arkansas, which will allow the plant to recycle and reuse 65,000 tons of materials per year that otherwise would have been sent to a landfill.

The project represents a $1.3 Million investment from CertainTeed and comes as Saint-Gobain continues to roll out its new global Grow and Impact strategy, which includes reducing waste and increasing the circularity of raw materials at its manufacturing sites.

Gypsum wallboard is made from a gypsum slurry that is poured and dries between two sheets of paper. Some scrap materials, consisting of gypsum and paper, are normally created every time a production line is started up or shut down, or when production equipment is changed to manufacture different sizes of wallboard.

The new recycling technology in Nashville works by grinding the waste gypsum and waste paper down into fine particles, allowing the plant to capture and internally recycle the materials, which are sorted and then reintroduced to the production process at the plant. Today, each wallboard produced at CertainTeed’s Nashville facility includes some recycled content made available by this new process, and the company plans to increase the amount of recycled materials in its gypsum wallboard in the coming years.

“In Nashville and at our manufacturing sites around the world, we remain laser-focused on reducing waste, reducing our consumption of natural resources, and increasing recycling and circularity throughout our value chain,” said Jay Bachmann, Vice President and General Manager of CertainTeed Gypsum. “We will continue to look for ways to minimize our environmental footprint while maximizing our company’s positive impact for our customers and the communities where we do business.”

CertainTeed’s Nashville plant, and its nearby mine, sit on 3,500 acres of land in scenic southwest Arkansas. Today the plant and the mine employ nearly 200 people and are currently hiring mechanical engineers, process engineers, reliability engineers and for several roles in production. A complete listing of job openings at all Saint-Gobain locations, including the CertainTeed site in Nashville, can be found on the company’s careers website.

The recycling technology installed in Nashville follows several other recent actions taken by the company to solidify its commitment towards sustainability: